Watchers of the Sky

In August of 1941, Winston Churchill made a speech, broadcast on the BBC, where he said, "The whole of Europe has been wrecked and trampled down by the mechanical weapons and barbaric fury of the Nazis…As his armies advance, whole districts are exterminated…We are in the presence of a crime without a name." The Nazis did not invent the concept of the calculated extermination of an entire people, although modern technology helped them be more efficient in their methods. It was Raphael Lemkin, a Polish Jew obsessed since childhood with man's inhumanity to man, who gave that crime a very specific name, "genocide". "Watchers of the Sky," an intricate and immensely powerful documentary, directed by Edet Belzberg, is both the story of Raphael Lemkin as well as a harrowing examination of genocide, past, recent, and ongoing.

Partially inspired by Samantha Power's extraordinary Pulitzer-Prize winning book about genocide, "A Problem From Hell" (the title coming from then Secretary of State Warren Christopher's comment that the Balkans, following the breakup of the Soviet Union, was "a problem from hell"), "Watchers of the Sky" covers so much ground and weaves together so many stories that it is not a surprise that it won the best editing award at Sundance. The past bleeds into the present, and the present then dissolves into the past, accurately reflecting the subject matter. Lines of refugees in 1939 Poland dissolve into lines of refugees from current-day Syria or the Sudan, going from black-and-white footage to color and back. The device tells the story better than any language ever could. Much of the film is about policy-making, and tireless lobbying, the wrangling of legalese and courtroom struggles, potentially dry stuff, but turned urgent and humane in Belzberg's hands.

As with Power's book, the story of Raphael Lemkin's single-minded quest to make genocide an international crime is the thematic thru-line, the thread holding it all together. As current counterpoints to Lemkin, continuing his thwarted legacy, "Watchers of the Sky" introduces us to four other people who have devoted their lives to combating genocide (one of them being Samantha Power, currently the United States ambassador to the United Nations, with decades of experience as a war journalist; she is our guide through the biography of Lemkin). First, there is Emmanuel Uwurukundo, who survived the genocide in Rwanda, losing the majority of his family. Now he works for the UN Refugee Agency, overseeing three refugee camps in Chad filled with people fleeing the conflict in Darfur. Ben Ferencz, a Hungarian-born Jew now in his 90s, was a prosecutor in the Nuremberg trials (and knew Lemkin personally). Still active as a lobbyist, he is shown circling the seats at the U.N. before a session, handing out pamphlets, bantering, joking, gossiping. Finally, we also meet Luis Moreno Ocampo, currently the chief prosecutor at the International Criminal Court, who cut his teeth in the 1985 Trial of the Juntas in his homeland, Argentina. Working with a team of investigators, Moreno Ocampo is seen building a case against Sudanese president Omar al Bashir. He wants to issue an arrest warrant on behalf of the ICC, saying chillingly in a press conference, "We cannot wait for him to finish his work."

Lemkin was born in 1900 in Bezwodne, Poland, territory that had been passed back and forth between empires for generations. As a child, Lemkin read "Quo Vadis," by Henryk Sienkiewicz, which told the story of the Roman Empire's persecution of early Christians. It got him to thinking. Why did man do this? Why was it not a crime? Why was the murder of an individual punishable by law but not the murder of millions? Could anything be done to stop it? These would be the questions that would obsess him for his entire life. The 1921 killing of the former Turkish prime minister by an Armenian who screamed as he pulled the trigger, "This is to avenge the death of my family!" made an impression on Lemkin, and he began to see such events as occurring in a long bloody continuum, back to the days described in "Quo Vadis." When Germany invaded Poland, Lemkin was unable to convince his parents to come with him to America. He came alone, becoming that natural byproduct of genocide, that entity he had read about and dreaded since he was a child, a refugee.

Once in the United States, Lemkin talked to anyone who would listen (and many would run the other way when they saw him coming) about the fact that what was happening to the Jews in Germany and Poland and elsewhere was not an aberration, but an ongoing eternal problem that needed to be addressed. As a studier of languages, Lemkin grappled with what to actually call this "crime without a name". He filled notebooks with rough drafts. What he needed was a word that that the civilized world would recoil from, as one. In her book, Power writes, "The word that Lemkin settled upon was a hybrid that combined the Greek derivative geno, meaning 'race' or 'tribe,' together with the Latin derivative cide, from caedere, meaning "killing.' 'Genocide' was short, it was novel, and it was not likely to be mispronounced. Because of the word's lasting association with Hitler's horrors, it would also send shudders down the spines of those who heard it."

Lemkin's faith in language may seem naive, and many thought so at the time. He was a curious figure, rumpled and fanatical, traveling to the Nuremberg Trials, haunting the halls of the brand new U.N., firing off thousands of letters to people all over the world, diplomats and human rights groups and politicians, looking for support for his idea that genocide prevention was in everybody's best interest.

"Watchers of the Sky" breaks up all of this material with haunting and eerie watercolor-looking animation, of dark forests or rolling fields filled with ghostly silhouettes of people, the figures slowly dissolving, one by one, leaving an empty landscape. Lemkin's handwriting from his notebooks unfurls across the screen, slowly, beautifully, making him into a living witness to the horrors we see today. The questions he asked, the solutions he proposed (many of which have come into fruition, flawed though they may be), all hover over the landscape in Chad, the lines of refugees waiting to be processed, some of whom have lived in the camp for three or four years now. The sheer amount of information that Belzberg had to organize, and fit into a seamless whole, is awe-inspiring. The pace feels like an unstoppable river, the current of history, the continuum of atrocity that Lemkin and others sensed.

There are those who see genocide (and its regular dance-partner, millions of refugees) as an intractable issue, in Warren Christopher's hopeless phrase, a "problem from hell." Lemkin saw the problem, witnessed it and experienced it, but turned his energy into asking, obsessively, the eternal question, "What is to be done about it?" "Watchers of the Sky" warns against apathy and hopelessness. It believes in the importance of language, of calling things by their proper names, and of being strong enough to be able to recognize real evil. In 1941, Adolf Hitler famously said to his military brass, "The aim of war is not to reach definite lines but to annihilate the enemy physically. It is by this means that we shall obtain the vital living space that we need. Who today still speaks of the massacre of the Armenians?"

The slogan "Never again" is meaningless without some sort of law to back it up. What that might actually look like is still a work in progress; work that "Watchers in the Sky" highlights. Lemkin's work, continued. While the film is not optimistic, and it does not provide "hope for the future" or anything equally as facile, it is a powerful reminder of the importance of the struggle itself. 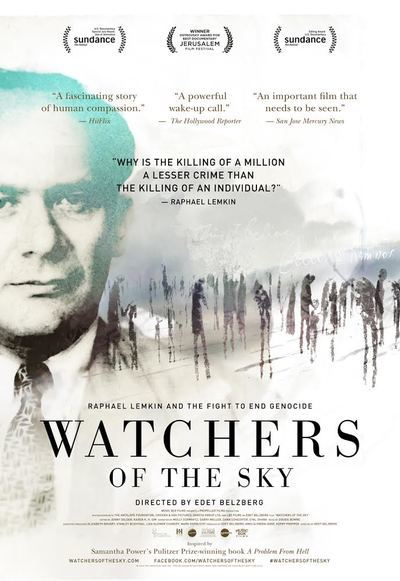