The US-Polish science-fiction movie "Warning" is bound to be unfavorably compared to “Black Mirror,” mostly because “Warning” is also an ungenerous collection of cynical sci-fi morality plays set in the near future. The main difference is that “Warning” runs about 85 minutes.

“Warning” also tut-tuts viewers who, like its cast of neurotic outsider characters, are not living full lives in our technology-rich modern age. Meaning, full lives as determined by the ungenerous creators of “Warning,” which features a half-serious subplot about a spiritually barren woman who falls apart when she can’t pray to “God 2.0,” an Alexa-style prayer computer device. There’s also a subplot that runs with one of the the best sci-fi stock plots—an astronaut’s life flashes before his eyes as he dies alone in space—but somehow it’s not awesome? “Warning” will judge you, but only after making some trite observations about man’s ongoing inhumanity to man.

To be fair, it’s kind of quaint to see the makers of a new English-language science-fiction movie take so much effort to lament our crippling reliance on technology. That old chestnut, again? “Warning” follows multiple stories, all of which take place on the same day. Most of them are variations on the same theme: humanity, still obsessed with all the wrong things, even in the future.

“Warning” begins and ends with its most high-concept scenario, the one that ostensibly ties the others together: doomed astronaut David (Thomas Jane) floats around outer space and thinks about his life after a freak electricity surge sends him flying out of control. That comic premise is about as indestructible as St. Peter scolding the dead at Heaven’s pearly gates. Unfortunately, David mainly exists to set up a darkly funny anti-climax that doesn’t work given the preceding sub-plots’ total lack of dramatic tension. Most of the movie’s vignettes, about cartoonishly vacant God 2.0-worshipper Claire (Alice Eve) and sadly obsolete companion robot Charlie (Rupert Everett), feel like half-completed sketches that were jammed together because less often looks like more when there’s lots of it. Besides, David’s here to put a bow on everything, just you wait.

Directed and co-written by Agata Alexander, “Warning” asks viewers to consider a few situations without ever really developing those ideas, characters, storylines, etc. Just imagine: what would you do if you, like mortal Nina (Annabelle Wallis), were confronted by your immortal in-laws, who didn’t want you to date their passive, adult immortal son Liam (Alex Pettyfer)? Or what if you, like Claire, became so dependent on technology that you felt compelled to ask for an inspirational quote for the day from an unassuming customer service rep? What would you do then?

These conceits aren’t original enough to be inherently likable, and they’re too often grounded by characters who are too bland and/or pathetic to be human. Nina mostly rolls her eyes and tries to be polite when she’s asked stuff like “Why can’t you find somebody of your own kind?” And Claire sets up various cheerful but impersonal customer service reps, for some underwhelming conceptual punchlines, like when Claire’s told to “do it manually” after she asks how she’s supposed to pray without God 2.0. These characters are walking gags, and they’re barely developed by individual performers like Eve and Wallis, who do a lot with very little.

Then again, can you blame some of the movie’s performers for being less than dazzling given the material they had to work with? Everett’s presence is cute, but his weird commitment to Charlie’s quirkier tics brings to mind the worst bits from “Heartbeeps.” By contrast, it’s hard to know what went wrong with Jane’s performance since he rockets through his line-readings as fast as David blazes through the various stages of grief. See David petulantly curse God: “As far as fathers go, you’re not very good either. Shit.” Now watch him enjoy a silly moment of zen, which ultimately paves the way for the movie’s snarky finale: "It's easier to live in an illusion than it is in ... reality."

What went wrong with “Warning” beyond a general lack of character or conceptual development? We meander from one story to the next until every idea, big and small, gets cast aside with childish zeal. I normally love genre movies that play out like bad shaggy dog jokes, but “Warning” doesn’t go far on such meager fumes. 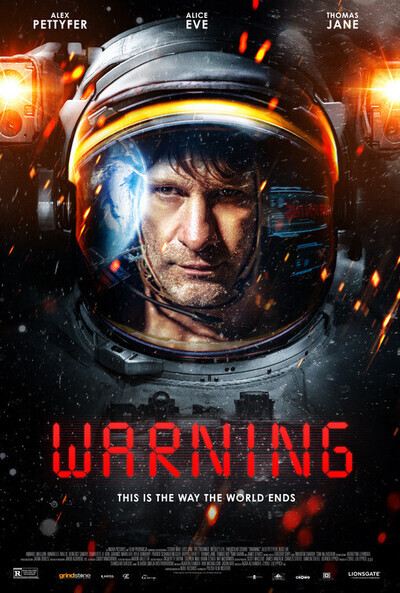 James D'Arcy as The Voice of God