This movie opens with a text: “To all indigenous, black, and people of color who are targeted, and have been displaced through border control on stolen land. May we expose government violence, propel change and honor the voices of those who have been silenced. ‘Wander’ was filmed on the homelands of the Pueblo, Navajo, and Apache peoples.”

Director April Mullen’s camera then dollies up a desolate desert road and an overturned SUV sitting in the middle of it. Inside the vehicle, a young woman crawls out and begins to run. Suddenly a shot rings out, and she falls to the ground, dead. We see no gun, no shooter, no nothing. And it’s a pretty wide shot.

A startling opening, and while “Wander” has other discrete bits of tension and jarring violence, the movie doesn’t entirely live up to it. You may start feeling deflated as soon as the authorities show up, and start saying things like “Calvary’s here? All right. Let’s do this.” And “This is outta control.” And “Not my job.” And “All of you.” It’s like there’s this Cop-Talk Bot that screenwriters cede power to when they’re feeling uninspired. (The script is by Tim Doiron.)

“Wander” does pick up when we meet Arthur and Jimmy. Not just because they’re played by Aaron Eckhart and Tommy Lee Jones, respectively. Also because their roles are unusual: They’re the hosts of a podcast investigating conspiracy theories, broadcasting from near their RVs in the remotest of locales, the better to avoid detection. Eckhart’s Arthur seems the more compulsively paranoid of the two. At first it seems his delusions are the product of Terrible Grief. And so they are—that’s the Hollywood way with these types. (They can’t just be blowhard hucksters.) Except as the movie goes on, it turns out they’re not delusions.

The key is that shot we heard in the first scene. The mother of the dead woman calls Arthur’s show and asks him to investigate the death. He doesn’t want to, because he’s, you know, paranoid. But Jimmy goads him into checking out the desolate town of Wander—the death happened right outside the city limits. And soon we learn the shot we heard wasn’t a gun—it was an exploding chip implanted surgically into the victim’s chest. One that goes off when she tried to check out of Wander.

OR WAS IT, the movie wants you to ask, right up to the very end. And here’s where one of its problems starts manifesting itself. Arthur’s investigation is less a procedure than a stumbling, and the information parceled out as he makes his way is sketchy. The emphasis on the protagonist’s wobbly state of mind is necessary, to be sure, but a not dissimilar exercise, like Christopher Nolan’s “Memento,” was better than satisfactory because it also had a very fully fleshed out story. This, despite the poignant notes added to the movie by Heather Graham as Arthur’s confidante, doesn’t. And that makes it kind of a drag at times, despite the energy director Mullen puts into the scenario’s depiction.

Now playing in theaters and available on demand and digital platforms. 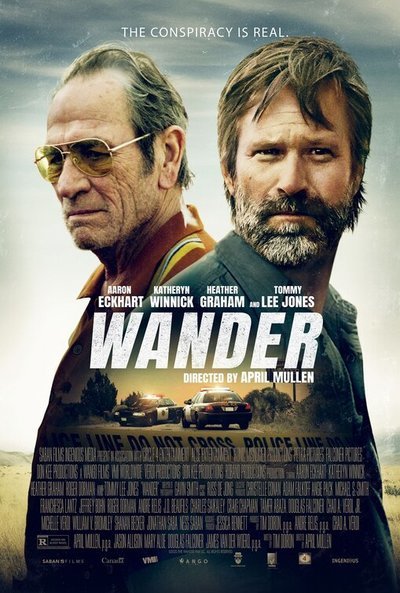