"Walking with Dinosaurs," the big-screen version of the internationally successful BBC series that taught younger viewers about the prehistoric creatures through state-of-the-art CGI recreations, is a film that is not so much bad—although it is quite bad—as it is utterly inexplicable. Instead of utilizing the same storytelling style that mesmerized viewers of all ages around the world via its captivating visual style backed by a quietly effective narration from Kenneth Branagh, the makers have instead chosen to scuttle that approach for a more overtly cartoony take that makes the "Ice Age" saga feel practically documentary-like by comparison. This is a move that was no doubt devised to attract younger viewers but even they are likely to feel put out by the childish nature of the material after a while.

Right from the start, it is obvious that something is desperately wrong with the proceedings when the opening scenes contain no dinosaurs to speak of but include plenty of Karl Urban as a paleontologist taking his niece and nephew on a trip to a dig in the wilds of Alaska. While the niece is all enthused, the sullen teen nephew is more interested his iPhone and his complicated pants and whatnot, but his interest is eventually sparked when a talking raven (John Leguizamo) arrives on the scene to transform into one of its ancestors, an Alexornis named Alex, and tell the kid an amazing dinosaur story. To say that this framing device, which inexplicably suggests that kids out there are not inherently interested in dinosaurs, is a mistake is an understatement for the ages—I promise you that there is not a single child out there who would rather watch Karl Urban yapping for several minutes instead of the dinosaurs that they were promised.

Our hero, once the film finally gets down to business, is a Pachyrinosaurus, helpfully known as Patchi (Justin Long), a quiet underdog who is the runt of his litter. Over the course of the next decade or so, he follows his tribe as they migrate south for the winter and return to the north during the springtime. Along the way, he falls in love with the fetching Juniper (Tiya Sircar), becomes involved in a battle of wills with older brother Scowler (Skyler Stone), a hothead who takes control of the tribe and nearly leads them into disaster, and dodges the fearsome Gorgosaurus, a T-Rex-like creature with tiny arms that are the source of much merriment here. To help stretch the running time out, there are also plenty of poop and snot jokes and even a couple of musical montages featuring the hits of Barry White and Fleetwood Mac for good measure.

As mystifying as this may all sound in print, it is nothing compared to watching it unfolding on the screen. From a visual standpoint, "Walking with Dinosaurs" is actually fairly striking for the most part thanks to the effective melding of the dinosaurs, which have all been designed in realistic terms without any visible sign of cartoonishness, and live-action backgrounds shot in Alaska and New Zealand. And yet, having spent such a considerable amount of time and effort to bring the period to life in as convincing a manner as possible, the filmmakers proceed to squander all that goodwill on a story that features lots of poop-related jokes and ill-advised wisecracks (why are prehistoric dinosaurs talking about ninjas?), all of which have been dubbed in such a lackadaisical manner that they don't even come close to matching the facial movements of the creatures delivering them.

The worst thing about "Walking with Dinosaurs" is that even though it has been handled about as badly as can be for reasons that I cannot begin to fathom, it will most likely do well at the box office during the holiday season because of the near-universal hold that dinosaurs have on the imaginations of the children who make up the majority of its target audience. Little kids will probably like it because it is bright and colorful (though far less so if you partake in the 3-D version) and simple to grasp but let's face it, one could say pretty much the exact same thing about the likes of "The Smurfs 2." For anyone over the age of 8 or so, it cannot help but come across as silly at best and downright condescending at worst and towards the end, most of them may be silently rooting for a comet to arrive and put an end to the whole sorry spectacle. "Walking with Dinosaurs" is a film that should have been entertaining and informative in equal measure in theory but in practice, it is basically one Gazoo shy of a lesser "Flintstones" rerun. 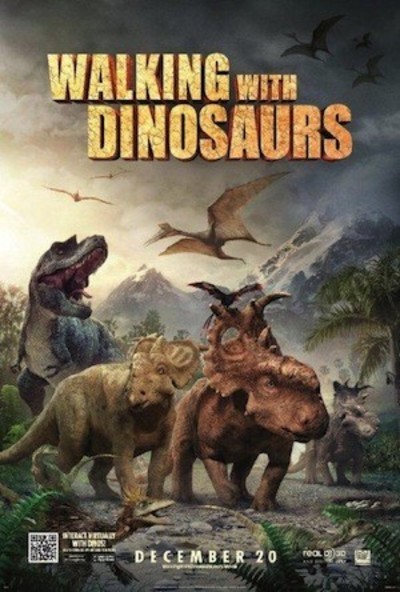