Some bad movies are in no hurry to announce themselves, but "Walker" declares its badness right from the opening titles with gushers of blood streaming from the wounds of men who are appearing (the opening credits promise us) in a "true story." The story takes place in Nicaragua in the age of the robber barons and loosely concerns the efforts of Cornelius Vanderbilt and his associates to make Central America safe for plundering.

Their plans include the support of William Walker, an American soldier of fortune who is consumed with notions of his own importance and who believes himself impervious even in the center of battle. He does indeed survive several vicious gunfights, although the movie makes him such a reptilian character that we would shoot him ourselves, if we could.

Walker is played in the film by that fine actor Ed Harris, who is done in by the script, the direction and certainly by the agent who negotiated his presence in this travesty. Another actor who needs a new agent is Marlee Matlin, last year's Academy Award winner for best actress, who follows up her triumph in "Children of a Lesser God" with a role that is a demeaning travesty. Playing Walker's deaf wife, she employs sign language to make such statements as "To hell with manifest destiny!" before she dies, incredibly, at the end of the first reel.

That leaves Harris virtually alone to negotiate a pointless and increasingly obnoxious exercise in satire by Alex Cox, the director, who doesn't seem to have a clue about what he wants to do or even what he has done. Although the ads for "Walker" don't even hint it, this movie is apparently intended as a comedy or a satire. I write "apparently" because, if it is a comedy, it has no laughs, and if a satire, no target.

As Harris stalks through the bloody streets of towns torn by revolution, bullets whiz past his ears without hitting him, and supporting characters read Time, Newsweek and People, and puff on Marlboros. Why? To show that it's all a joke, perhaps, or that today's headlines are the same as yesterday's, or that the press has always had it all wrong about Nicaragua, or that Alex Cox is a clever lad.

Well, he is a clever lad. He is the director of "Repo Man" and "Sid and Nancy," two of the more interesting films of recent years, but recently his career has gone straight to hell. "Straight to Hell" was, in fact, the name of his previous film, a quickie would-be South American comedy that he knocked out before proceeding to the ostensibly more serious work of "Walker," a film that looks like the sequel to "Straight to Hell." Both films use anacronisms, guest stars, quixotic poker-faced heroes and utterly pointless scripts, and both films suffer excruciatingly from the absence of funny material in the holes that have been provided for same.

Harris and Cox will no doubt survive to make other, better, movies. Matlin is at a point in her career when, having shown she is a gifted actress, she must now demonstrate that a deaf actress can find meaningful work in the movies. This film does nothing to argue that point. It is an insult to her talent. Perhaps she believed, as others did, that the gifted Cox would find humor and satire between the lines of his dreary script. But this movie's poverty of imagination has to be seen to be believed. 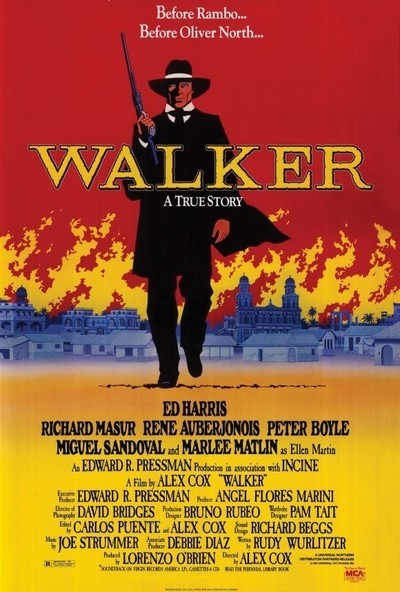