The words “don’t” and “stop” would seem pretty clear in their meaning and intent, but they change completely depending on who’s saying them and the inflection they use as we see in the shocking “Violation.”

This is a rape-revenge thriller that is unlike any other in its extremes, from breezy dreaminess to relentless brutality. It also happens to have a woman at its center in Madeleine Sims-Fewer, who co-wrote and directed with Dusty Mancinelli and gives a visceral physical performance as its star. But that’s where any similarities to Emerald Fennell’s excellent “Promising Young Woman” end. “Violation,” the filmmaking team’s feature debut, wisely wants you to look at sexual assault from a female perspective, but there’s nothing sardonic in its tone; rather, it aims to pummel you into feeling the magnified pain of a woman who already was suffering from a fractured mental state. It is deeply disturbing in its depiction of violence—a tough watch, whether you’re a survivor of sexual assault or not. This movie is sure to upset your mood long afterward and could be quite triggering. Consider yourself warned.

Sims-Fewer’s Miriam seems troubled herself at the film’s start as she travels to a cabin in the woods with her husband, Caleb (Obi Abili). There’s a chilliness between them as they drive the scenic roads en route to their destination. And while the slow-motion images of the trees, forests and lakes they pass may seem cool and bucolic, there’s clearly something sinister lurking underneath. The filmmakers return again and again to the image of a wolf attacking a rabbit in the woods, gnawing on its furry flesh in extreme close-up. It may seem like an obvious metaphor, but who the predator is and who the prey is will shift over the course of time.

Waiting at the cabin are Miriam’s sister, Greta (Anna Maguire), and Greta’s husband, Dylan (Jesse LaVercombe). But while there’s a slight prickliness to the sisters’ relationship, Miriam and Dylan enjoy an unmistakably flirty connection. Walking and talking in the forest, they share a sparky chemistry. They tease each other both also notice little quirks, suggesting a degree of care and fondness.

Eventually, though, things change after a drunken night by the fire pit. And then they change again. To divulge more would be a spoiler, and if you have the stomach for “Violation” you should know as little as possible about specific plot points. But suffice it to say the warm, intimate aesthetic of the film’s first half gives way to an approach that’s more graphic, bleak and in your face. It is bloody, gory and nauseating, for one of the film’s characters and for us. In a way that’s reminiscent of Lars von Trier, the camera doesn’t look away, even though you'll likely feel the need to do so yourself. But there’s no rush of satisfaction in this revenge. It’s all just sickening and sad.

Sims-Fewer and Mancinelli want us to view Miriam clearly and absorb what she’s going through, to give her our complete attention as she works through her anguish. And yet as a character, she’s a bit of a cipher, despite Sims-Fewer’s raw and committed performance. We never know what the rift with her husband is about, and there’s absolutely nothing to his character. This is especially unfortunate because Caleb, who’s black, is the only person of color in the film.

Also problematic is the filmmakers' decision to tell the story out of chronological order. They jump around in time in a way that’s disorienting at first and makes us work, because it’s unclear whether the moments we’re seeing take place before or the couples’ getaway weekend. Further confusing matters is that these scenes are also set at the cabin. The jumbled narrative structure allows for a couple of a-ha revelations, but it mostly creates a distance for the viewer.

And yet despite these flaws, the artistry on display in “Violation” is undeniable. Cinematographer Adam Crosby creates an ethereal vibe through both gauzy, pastel wide shots of natural beauty as well as tight close-ups of flies trapped in a web or a spider crawling on a porch railing. (The actual assault is depicted in an understated manner, through glimpses of fingernails or hair. There’s nothing exploitative about it.) And Andrea Boccadoro’s score, full of groaning strings and delicate, percussive bits, adds greatly to the unsettling tone.

But while the filmmakers’ intent is certainly commendable, the film as a whole is nearly impossible to recommend. 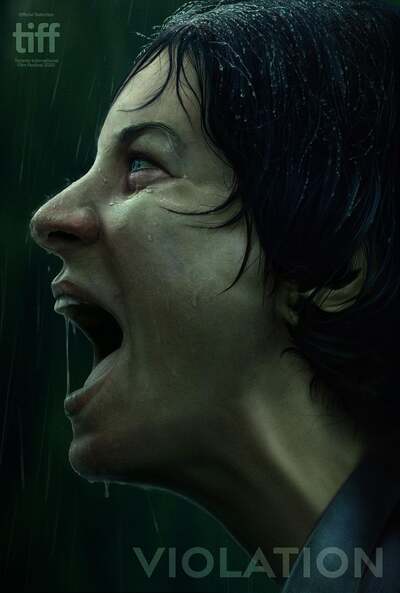