"Look at us, falling right back into our old rhythms."

The heroine's sometime lover Logan Echolls tells her that in "Veronica Mars" the movie. Rob Thomas' same-named source was aware of itself as both a riff on film noir and a TV show. Its heroine—a Nancy Drew of Neptune, California played by Kristen Bell—narrated her own adventures as if she were the harshest critic of a program she starred in, mocking her own bad judgment and describing people and neighborhoods with the cattiness of a Television without Pity commenter. The series was hip to the way young 21st century Americans watched TV, congratulating themselves on having predicted certain plot twists even as they longed to get swept up, like Veronica, by conspiracies and love. The movie, which is set in the heroine's hometown on the weekend of her tenth high school reunion, takes the show's self-awareness up a notch.

The heroine cautions herself not to get sucked into the rush of private detective work again, and even compares her nostalgic impulses to an addiction she can't seem to recover from.  "It's a Springsteen song," she warns us in the opening narration. "Get out while you're young."  Thomas packs the script with talk of old habits dying hard and getting stuck in the past vs. moving on, and builds out the TV show's web of friendships and blood relations to the point where non-fans may find the film impossible to follow (if you're among that group of viewers, be warned that neither the movie nor the star rating at the top of this page are aimed at you).

Wouldn't you know it: the new case revolves Veronica's her ex-boyfriend Logan (Jason Dohring). The spoiled and bitter yet eloquent bad-boy distanced himself from all the death and scandal he endured in high school by joining the Navy and flying jets over Afghanistan. He returned a war hero and married another of Veronica's classmates, a pop singer who was known as Carrie Bishop in high school (she appeared in two 2005 episodes and is now played by Andrea Estella) but renamed herself Bonnie DeVille and had a tumultuous, Amy Winehouse-like career. When she's found electrocuted to death in her bathtub, Logan is the prime suspect, and why wouldn't he be? Though ultimately more sinned against than sinning, the guy is a magnet for violent death, and his sneering attitude and fondness for debauchery make the world assume the worst of him.

Veronica's in New York City when Logan calls for help. She's on the verge of landing a gig as an investigator with a white shoe law firm (headed by Jamie Lee Curtis) that's looking for someone to "make sure frivolous lawsuits disappear before they happen." Returning to Neptune would jeopardize both her job prospects and her relationship with her boyfriend Piz (Chris Lowell), who's's ensconced at National Public Radio's "This American Life" (the perfect place for him). But return she does. If she didn't, there would be no movie.

She's joined in her quest (willingly or reluctantly) by a rogues' gallery of regulars, including Wallace Fennel (Percy Daggs III), Cindy "Mac" MacKenzie (Tina Marjorino), and she's obstructed by former classmates and other Neptune citizens (including Krysten Ritter's Gia Goodman and Ken Marino's Vinnie Van Lowe).  And of course she's aided and  teased by her pop, Keith Mars (Enrico Colantoni).

Keith taught his daughter much of what she knows and serves as both Veronica's and the film's philosophical North star. His attitude, like Veronica's, is classic private dick posturing: romantic idealism wrapped in a hard shell of cynicism. He seems to have become even more bitter about Neptune with time, but he still can't stop defending the place, even after he was drummed out of the sheriff's office and into gumshoe work by rich men and their government cronies. The Mars family's mentality is the show's mentality: populist, verging on Marxist, with sympathy for the poor and marginalized and distrust for the rich, especially those who inherited their money. "The Neptune way is protecting and serving the highest bidder," Keith tells Veronica, watching a stop-and-frisk operation that's meant to gentrify a once-seedy neighborhood. And yet, like Veronica, he can't make himself not care.

As you may know, "Veronica Mars" is the highest profile movie to date to be financed via Kickstarter, a crowdfunding service that's like a glorified version of tossing money in a street musician's hat. It's the perfect project to be funded in such a manner because it's based on a program that was beloved but never widely seen. I can't imagine anyone who liked the show not enjoying this film, even though the first half is stronger than the second, which spirals into a frenzy of double- and triple-crossing that's  less engaging than watching the characters reconnect, awkwardly but with feeling. It's aimed at a particular audience with particular needs and satisfies them. It may be the ultimate example of what's known as "fan service." Its pleasures include emotionally resonant pop music, widescreen color-noir photography (by Ben Kutchins), and a big cast full of smart actors playing sharply defined, still-surprising characters.

First among equals are Bell, who's as tough and sexy as an actress can be while still reading as decent; Colantoni, who seems incapable of hitting a false note, and Dohring, whose acting always had a touch of the young Mickey Rourke's contemptuous self-awareness, and used it to fool viewers who thought they had Logan figured out. (He's the punk preppy Heathcliff.)

All in all, the movie delivers what you expect, but not in the way you expect it. That makes it work as both a long-delayed if abbreviated fourth chapter in Veronica's story, and a rare big-screen version of a TV show that rethinks its source rather than merely recycling it. Watch, for example, how the film deals with the reunion itself, which was presented in advance PR as the central event in the film. It both is and isn't—and like the rest of the movie, it uses digital technology, including smart phones, texting and streaming video, as a means of advancing the story and commenting on what has changed and what has remained constant.

The constants include Veronica's impulse to be good even when there's no percentage in it. It's really not Neptune or Logan she's addicted to, much less any particular substance: it's the lure of being decent in a world that conditions us to think that decency is for suckers. "It's not always easy doing the right thing," her dad once told her. "If that phrase isn't on the Mars family crest," she replied, "it should be." 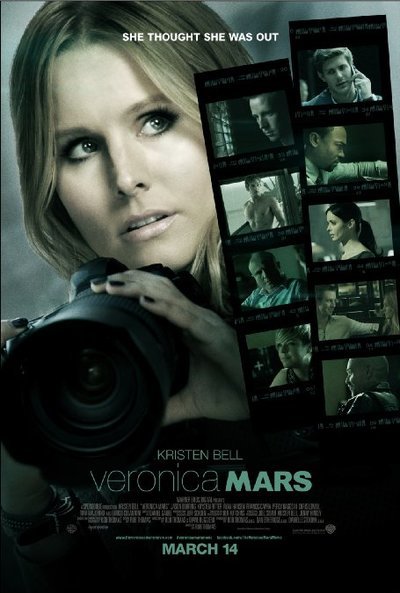