All four actors are trapped in one-note roles in repetitive scenarios that become increasingly tedious. It’s the same kind of raunchy comedy over and over again from director Clay Tarver, who also worked on the script with a couple of credited writing teams: brothers Tom and Tim Mullen and the “Horrible Bosses” duo of John Francis Daley and Jonathan Goldstein. The idea of “Vacation Friends” has been kicking around so long, it was originally supposed to star Chris Pratt and Anna Faris back when they were still married, which makes total sense in retrospect once you’ve seen Cena and Hagner’s anything-goes performances.

But the laughs never really build to anything because the movie is so insistent on shocking us from the beginning. There could have been a sly, steady tension here—just how wild and weird can this vacation get?—but the script lays it all out there from the get-go. There’s no depth to these characters and no subtext to their actions. They are who they are all the time, even though by the end they’re supposed to have gone on some sort of transformative, revelatory journey.

Howery and Orji co-star as Marcus and Emily, a longtime couple traveling to a luxurious Mexican resort where Marcus has an elaborate plan to pop the question. (Carlos Santos has an amusingly dry delivery as the hotel’s catty concierge.) He’s uptight and controlling and wants everything to be perfect; she’s proper and understated and still seeks the approval of her stern father. So when they cross paths with Cena and Hagner’s Ron and Kyla, they’re initially appalled by the couple’s free-spirited, hard-partying ways. Ron is beefy but big-hearted; Kyla is perky and daffy. They have no filter, restraint, or qualms about spending every last cent having the best possible time—and Cena and Hagner do indeed share an enjoyably zany chemistry, at least for a little while.

Ron and Kyla are so persistent, they quickly wear Marcus and Emily down and drag them into their debauchery. Soon, they’re all sipping margaritas, slamming tequilas shots, and pounding Tecates. Over the course of a fast-paced montage during one crazy week, they crash a catamaran, race jet skis, get into a bar fight and more en route to an especially inebriated and eventful final night.

But what happens in Mexico doesn’t stay in Mexico, as Marcus and Emily learn seven months later when Ron and Kyla drive cross-country to crash their wedding. And here’s where “Vacation Friends” begins to feel like it’s being split into a second, separate movie. The writers have established that Emily’s father (Robert Wisdom), an Emory University dean, disapproves of Marcus, derisively describing him as a construction worker when he actually owns a contracting business. Emily’s brother (King Bach) similarly hates him. Meanwhile, Marcus’ more down-to-Earth parents arrive at the fancy wedding weekend with a bottle of cognac and a penchant for saying the wrong thing. The friction this socioeconomic rift creates at a time when expectations and stress levels are already high could have supplied sufficient fodder for its own R-rated comedy. But Ron and Kyla have to return to the mix, which merely heightens the sense of chaos.

Through it all, “Vacation Friends” maintains a predictably episodic structure. Whether it’s a stuffy fox hunt, a high-stakes golf game, a ladies’ spa day, or a rehearsal dinner toast, the crass Ron and Kyla initially seem to ruin things for Marcus and Emily, only to have their kindness and generosity save the day. (An homage to the Beastie Boys' "So What'cha Want" video comes out of nowhere and feels especially random.) None of it is terribly funny, but Cena’s presence is appealing, and Howery’s exasperated reactions are entertaining here and there. Orji and Hagner get even less to play besides serving as supportive partners for the men. And then, after 90 minutes of inappropriate antics, “Vacation Friends” abruptly shifts into sentimentality at the end with facile notions about the power of friendship.

It concludes with its characters literally taking a plunge into the unknown in a repeat of a scene from earlier in the film, but if we don’t believe in this supposedly transcendent connection, it’s hard to care about where they land. 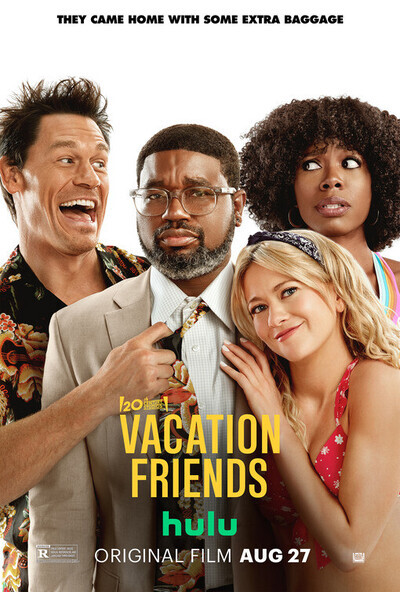