Vapid, obnoxious New York party kids stumble upon a drug that delivers more than they bargained for in “Urge,” a movie that’s as empty and unlikable as the characters themselves.

With his feature-directing debut, Aaron Kaufman has crafted a lean, mean little film that’s stylish but soulless. That’s fitting given the setting and subject matter, but it doesn’t make for terribly compelling viewing. As the drug causes society to degrade entirely over the course of a single weekend, “Urge” actually grows dull and numbing, just as it should be reaching a gripping climax.

“This weekend is going to be epic,” Neal assures the reluctant Theresa. The word “epic” gets thrown around a lot in Jerry Stahl’s script, but the movie itself rarely delivers on that promise.

Soon, they’re all gussied up for a night of debauchery at Volcano, a red-light club where a mysterious pair of giant, masked eyes on the outside of the building size people up and determine whether they’re worthy of entry. Inside the cavernous, ornate structure, strangers grind on the dance floor and a performance artist named Xiomara (Kea Ho) entertains the crowd in red-leather straps and Victoria’s Secret-style angel wings. Meanwhile, more strangers in fetish gear massage and seduce Neal and his pals in the VIP area.

It’s the kind of stuff that might have seemed titillating and shocking back when “Eyes Wide Shut” came out back in 1999. Now it just looks desperate and obvious.

Soon, Jason is being led to a back room where the club’s owner—a dapper, cackling Pierce Brosnan, listed in the credits only as The Man—offers a lot of philosophical babble before explaining exactly what the drug is that everyone’s taking at this place. It’s called Urge, he says, and he claims it allows users to become a pure version of themselves. Jason is welcome to share it with his eager pals. But! There’s a catch. You can only do Urge once in your lifetime.

Strangely, this cobalt-blue inhalant does nothing for Jason. But all his friends have the time of their lives, letting go of their every inhibition—which, naturally, prompts them to ignore the one-time-only warning and try to relive the magic the next night.

But whereas round one was sexy, fun and freeing, round two makes them angry, paranoid and violent. And it’s not just Neil and his buddies. It’s everyone on the entire island. The deterioration of society comes swiftly and it takes various forms, from one friend in the group (Ashley Knapp) cavorting on the kitchen counter with an entire cake to rough sex that goes wrong to party guests straight-up pummeling each other for laughs.

All that brutality and promiscuity is surprisingly boring, though. These characters were already such awful people that they don’t have that much farther to fall—and the eventual epiphanies that at least some of them experience ring hollow as their sandy playground turns into a bloody wasteland.

It’s also hard to discern Kaufman’s point. Is “Urge” a cautionary tale about what happens when you get what you want all the time? Supporting characters who are workout fiends or Botox junkies meet their ends in spectacularly bloody fashion while trying to scrub away the things they hate about themselves (which is unintentionally hilarious). Is Kaufman shining a light on the folly of our vanity?

Maybe he’s making a statement on how malleable and insecure humans tend to be. Brosnan is clearly a Satan figure with his deep tan and sleek dress, quoting Milton at a diner in the cold, hard light of day. He at least appears to be enjoying himself here in a rare chance to play a pure villain. (That diner scene, by the way, is a prime example of the film’s artfulness with its noirish shafts of lights through the blinds. It’s stylish even as it turns ugly.)

Maybe Kaufman is just trying to have his cake—and roll around in it—and eat it too. 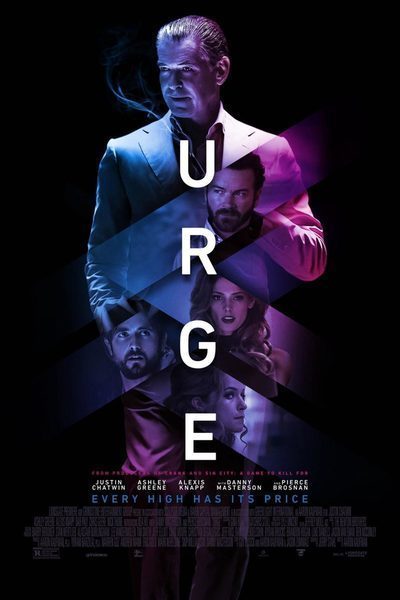 Rated R for disturbing violent and sexual behavior, drug use, and language throughout.

Pierce Brosnan as The Man