“Uncle Kent 2” is the rare sequel that knows it won’t make any money and that its existence is a joke. “Wait, what was 'Uncle Kent 1',” you might ask. Exactly. In a movie climate of questionable sequels, from “Independence Day: Resurgence” to this weekend’s “Mechanic: Resurrection,” “Uncle Kent 2” wants to be the most unnecessary of all of them, perhaps of all time, and create a franchise out of a micro-budgeted mumblecore film directed by Joe Swanberg in 2011. If the rest of this review sounds like I'm losing my mind, “Uncle Kent 2” has succeeded.

“Adventure Time” cartoonist and actor Kent Osborne was the star of “Uncle Kent,” a documentation of sorts about him being a lonely, pot-smoking cartoonist who had trouble connecting with others, like Jenny (Jenny Prediger), a platonic female friend he met on ChatRoulette, or his cat. Osborne and Swanberg wrote the film together, and with very lo-fi filmmaking it glanced upon some raw truths about missing the boat on human connections. This is all stated because none of the above matters directly to “Uncle Kent 2,” which takes this mumblecore specimen and sets him out in the world, albeit making the movie that his loner character, Kent, would want to see.

For the first 12 minutes of “Uncle Kent 2” (which are directed by Swanberg, and start with the 2011 film’s opening credits), we see Kent watching his own version of himself, and then deciding there should be a sequel. He pitches it to Swanberg at a party, and though Swanberg initially balks, he deduces that since “Uncle Kent” was essentially about Kent’s life, Kent should do whatever he wants with the “Uncle Kent” story. Though what results is not the film that Kent wants, Osborne helps create what is essentially a live-action cartoon with a mumblecore movie’s scope.

After the Swanberg interaction, “Uncle Kent 2” is officially kicked-off by a long closeup of Osborne’s bouncing naked breasts while aggressively shaking a salad container. It’s also indicated that from here on it’s director Todd Rohal’s film, and the aesthetic certainly brings in more animation, color filter changes and soundtrack choices than a Swanberg era movie from the early 2010s. With Osborne (in real life) now acting as the sole credited writer, the story follows Kent (the character) as he wants to make an “Uncle Kent” sequel about the apocalypse, works on an animated web series called “Cat Agent” and finds himself among unusual people at San Diego Comic-Con. When he sleeps, he gets random songs stuck in his head while dreaming about his sequel, the latest being Swing Out Sister’s “Breakout” (“You’ve got to find a way, say what you want to say, break out.”) While at Comic-Con and in between interactions with an attendee who has a distorted face, Kent becomes vocally concerned about the singularity theory, in that if we believe artificial life is an inevitability, our very existence could be the unknowing creation of such AI.

The big problem throughout “Uncle Kent 2” is that while it can offer some amusement, it all feels like an inside joke. Mind you, that’s coming from someone who has seen the equally personal “Uncle Kent,” a movie you really don’t have to know about before trying out “Uncle Kent 2.” But just as Osborne initially pitches a sequel to his friend Joe at a party, the movie stays in that mental space, enjoying itself for extended one-note gags with familiar faces; Steve Little returns from Rohal’s grating “The Catechism Cataclysm” to make a minute-long joke out of a doctor asking Kent to “follow [their] finger,” walking around the room and out of it, his off-putting hamminess still in tact. Most excluding is Kent himself, who on-screen is just a different brand of white bread. He makes you wonder if you must know the real Osborne to get why Kent is such a funny character as the happy-go-lucky straight-man to the movie's David Lynchian or apocalyptic atmospheres. 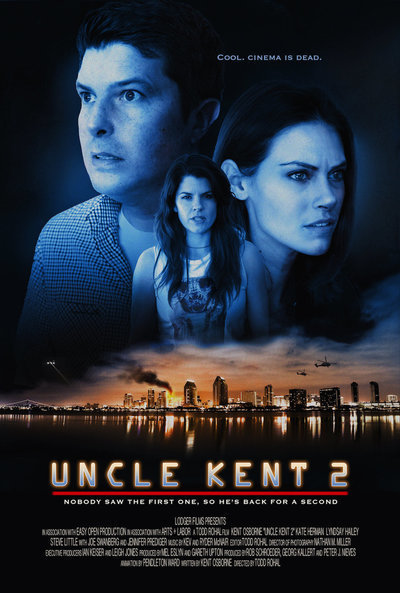