It’s Mammaw season at the movies. The tart-tongued, Appalachian Sofia Petrillo lookalike played by Glenn Close in “Hillbilly Elegy” is succeeded by the Mamaw of “Uncle Frank.” Here, she’s played by Character Actor Margo Martindale, who has one moment of truth in this tired, trope-filled feature. In the wisdom dispensing department, we also get the aptly named Aunt Butch (Lois Smith), a crusty old woman with spiders in the bun of her grey hair. I’m not so sure I’d put my trust in what she has to say, however. “You’re gonna burn in Hell,” she tells her nephew, Frank (Paul Bettany), echoing what religious folks say to members of the LGBTQ community. Uncle Frank takes her comment as a sign of her newfound acceptance of his sexuality.

Uncle Frank is gay and living in New York City. Having escaped his small-town existence, he’s been shacking up with Wally (Peter Macdissi), an immigrant from Saudi Arabia. It’s 1969, and the narrator of our story, Beth (Sophia Lillis), has found a kindred spirit in her fellow family outcast. He takes an interest in her feelings and thoughts, advising her that she should be her own person. He also offers to pose as her parent should she ever need birth control. It’s safe to say Frank is the coolest person in a family that includes Beth’s mean-spirited dad, Mike (Steve Zahn) and the even meaner family patriarch, Daddy Mac (Stephen Root). Both treat Frank like trash, hastening his escape to the Big Apple.

Fast-forward four years and Beth is now a student at NYU, where her uncle is a professor. She’s happy to be closer to the one family member who understands her. Back in South Carolina, Beth never picked up on the reason Daddy Mac hates his son so much. So she’s a tad confused when she crashes a party at Uncle Frank’s and Wally answers the door. He’s always wanted to meet a member of Frank’s family, but whenever they’ve visited, they’ve been met by Charlotte (Britt Rentschler), a lesbian whose specialty is posing as the “slutty girlfriend” of her gay BFF’s. After nursing Beth through her first brutal brush with booze, Frank outs himself.

“I’ve never met a gay person before,” says Beth. Oh, but she has! The boyfriend who convinced her to pay that unexpected visit to her uncle had an ulterior motive: He’s hot for teacher. After dismissing the guy with an amusing response to his awful pick-up line, Frank tells Beth not to get her hopes up on bedding him. This entire subplot exists to show how clueless she is about signals; as soon as that character entered the movie, it was obvious his romantic interests were elsewhere. Frank also points out that the choir director at the First Baptist Church was one of his tribe. “But he’s so religious!” gasps Beth.

Up until this point, director Alan Ball’s script has engendered a large amount of goodwill and interest. There’s entertainment value in watching these two characters navigate the new bends in their relationship. Additionally, the relationship between Wally and Frank feels lived in and sexy. It’s unfortunate that Ball throws a monkey wrench into the proceedings by having Daddy Mac drop dead. The overused plot device turns “Uncle Frank” into a road trip, and a silly one at that. Frank begs Wally to stay home while he attends the funeral. He knows his family, and he knows the South. Wally follows him anyway, and here’s where I started to itch.

The trailer for “Uncle Frank” makes it look like “The Help,” except this movie’s straight girl is inspired and changed by the suffering of a Magical Homosexual. The film is not that egregious, but it’s also not that far off from that description. The forced return to his hometown causes Frank to be plagued by predictable flashbacks of the first boy he fell for in his adolescence. That forbidden love ends in the kind of tragedy reserved for gay characters in decades in American cinema. These memories cause Frank to crawl back into the bottle, lashing out at the poor, suffering lover who’s put up with this for years. The farther we get from the central relationship, the more clichéd “Uncle Frank” becomes, and these clichés are outdated and trite.

The way Wally is written is also a problem. His naïveté about the potential dangers awaiting him in the South is rather insulting. Frank warns him repeatedly that his clan is far from enlightened and that it will be potentially dangerous for him to make this trip, but Wally disregards all of this. There’s also an unwise comparison between Wally’s home country, where he would have been beheaded for his sexuality, and the religious zealotry of the conservative South, where one could be disowned at best, murdered at worst; the film posits that the latter is somehow a better deal. The realism of Frank and Wally’s relationship in the early scenes gives way to Wally playing second fiddle to the film’s attempts to extract tears from you by kneecapping your emotions.

Paul Bettany somehow rises above all this, giving a very good performance. He does his best to keep Frank three-dimensional, and he proves that a cigarette is still the greatest cinematic prop an actor can lean on in a scene. Lillis and Macdissi are also good, though they’re shortchanged when Ball succumbs to the dated take on the material and the far too easily resolved, fairytale feel of the film’s final scenes. Bettany manages to find a moving, realistic and harmonious note in all this dramatic dissonance—he’s genuine even when the scenario is not.

“Uncle Frank” commits the unforgivable sin of giving us one evil character whose demise suddenly unleashes a wave of understanding amongst family members who were, until this point, perfectly happy to enforce the harmful status quo that traumatized one of their own. The extended family that Frank and Wally created in New York City is like the ones many LGBTQ people built for themselves to replace their far less supportive blood relatives. This film ends by basically saying “sure, these homophobic, religious bigots made my life a living Hell before making a half-assed motion to tolerate me after a death, but they’re still my family and I should continue to put up with them.” Maybe you can live with this message, but I couldn’t abide it. At least I wasn’t given the brutally sad ending I expected. 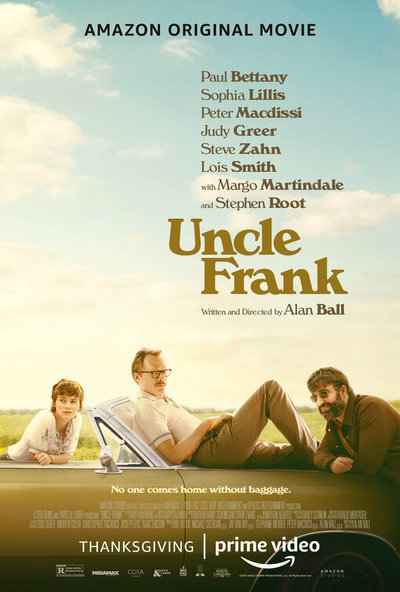 Rated R for language, some sexual references and drug use.