There’s a special goof to seeing professional athletes act, like unmistakable cameos without any stress over quality line-reading. Five-time NBA all-star Kyrie Irving tapped into this fun when he constructed the slam-dunking septuagenarian Uncle Drew, writing and directing some commercial shorts based on the character for a zero-calorie soda. Like a “Jackass” skit without the threat of exposed fake genitalia and plenty of product placement, they featured Irving, dressed and made-up as an old man, dunking on very skeptical young players, before revealing his true identity. It’s a simple concept with huge potential, and it's bungled by this feature adaptation in more ways than sincerely passing off basketball players as actually old characters.

The movie, directed by Charles Stone III and written by Jay Longino, does pop at the start with a “30 for 30” about Uncle Drew’s legendary NBA status, as a whole cast of real-life legends sing his praises. After establishing its credibility as a comedy with plenty of basketball in-jokes, the film moves into a strong underdog narrative about a b-ball fanatic named Dax (Lil Rel Howery) who wants to help his team win New York City's non-professional Rucker Classic street ball tournament. Days before the big showdown, everything falls apart: his roster ditches him to work with his sociopathic arch nemesis Mookie (Nick Kroll, the cinematic king of douchebags), causing his girlfriend (a delightful Tiffany Haddish) to ditch him. Before he gives up all hope of winning the tournament, some men at the barbershop (including Mike Epps and J.B. Smoove in old-age make-up) advise him to link up with a guy named Uncle Drew, and the players he once ruled the game with.

“Uncle Drew” then becomes a story of a gang slowly coming together, packing in more septuagenarians to Drew’s shiny orange van, one barely-sketched comedic sequence after the next. Chris Webber plays a preacher with a habit for dunking during his baptisms; Reggie Miller is a legally blind man (guess what ensues when he places himself behind the driver's wheel); Nate Robinson is the wheelchair-bound Boots; and Shaq is a martial arts instructor with a grudge against Drew. As Dax assembles his team, "Uncle Drew" becomes part shaggy buddy-road movie, part stale young vs. old movie, but half of a great comedy.

Considering both its comedic and athletic roster, “Uncle Drew” has a cast of all-stars, and the script will leave you wishing they did so much more with everybody. For one, these athletes don’t seem to have just walked on set after getting hours of make-up—they’ve constructed physical tics and gravely voices for their elderly characters. They just aren’t given enough to work with. Scenes are often driven by a single joke, or maybe two, but the wackiness is too obvious, like the phoned-in promise of seeing Shaq’s bare ass after a certain pointless plot development. "Uncle Drew"'s interest in easy jokes only really works when these old dudes later show off their moves at the club, because damn, these guys can dance. As dispiriting as it is to admit, the MVP of “Uncle Drew” might be Nick Kroll’s ADR, his canned dialogue offering such left-field, laugh-out-loud gems as “old people are overrated!”

That’s just the men of “Uncle Drew”; the women have it much worse. Any movie that goes out of its way to prevent four-time Olympic gold medal-winner Lisa Leslie from playing basketball until the very end has a problem, and that’s exactly what this movie does when it casts her as the bat-swinging, car-chasing jilted wife of Chris Webber’s Preacher. Her use to the movie as another woman who has been scorned or scored is no different than that of Maya (Erica Ash), Boots’ granddaughter, who is written as if to be an emotional robot meant to comfort either Dax or her grandpa. Even Tiffany Haddish, who brings a comic energy that could power an entire city, is stuck playing a prize, as autonomous and in-your-face as her character Jess may be.

Even as a sports movie that moves toward a climactic tournament, “Uncle Drew” trips itself up, the hook of seeing these septuagenarians own the court put off for too long. When they’re finally able to prove that they can still play, it’s a weak pay-off, making for scant tension when it gets to the big game at the Rucker, even though this should be the point where a movie like “Uncle Drew” is in its element. Stone’s direction only packs an excitement with the actual gameplay in third act, as there is some dazzle when players like Irving can show off their skills with ball control and slam dunks, like stunt-men who have perfected some unbelievable tricks. But the game footage itself only gets a cinematic oomph because dunks are shown in slow-motion, or a great three-pointer is captured from an angle you can’t get in a regular TV broadcast.

Though it has a few big laughs, “Uncle Drew” mistakes its goofy pitch for a free pass to be very simple with its comedy, and sappy with its emotions. But what keeps the movie from totally feeling like a cheap feature adaptation of a commercial is Irving’s heart, as expressed through the constant witticism and near-perfect character of Uncle Drew: Irving sincerely wants to inspire the young bloods in the crowd, and through the ageless joy of basketball. But even then, a lack of cleverness dominates the frame: At the end of the movie, with a completely straight face, he tells Dax, “You miss 100% of the shots you don’t take.” That’s just lazy advice, and, as further proof that this movie isn't quite sure what it should be, a quote from Wayne Gretzky, a hockey player. 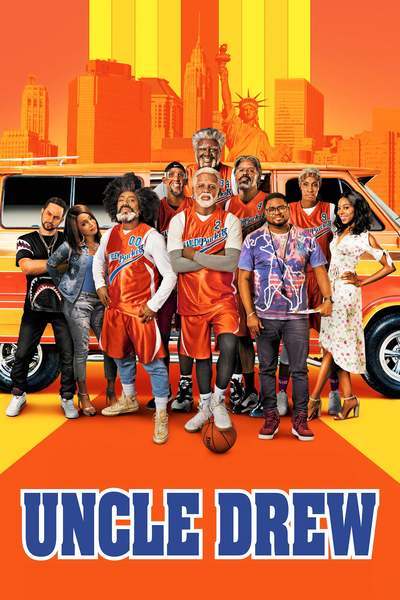