Angelina Jolie directed the high-profile, high-budget “Unbroken,” based on the best-selling biography by Laura Hillenbrand of Louis Zamperini, an Olympic runner who was shot down over the Pacific in WWII, survived 47 days on a raft, and then was captured and tortured in a Japanese prison camp. There was a lot of criticism from the evangelical community because it did not include Zamperini’s post-war struggle with PTSD and alcoholism until he was born again at a Billy Graham revival, stopped drinking, and devoted his life to speaking about his faith.

Four years later, the Christian film company Pureflix has produced a sequel to cover those years and it has more in common with the low-key aesthetics and overly didactic lessons of Sunday school good-for-you movies than with the more ambitious and wide-ranging original. As the title makes clear, these filmmakers are more concerned with making sure you cannot miss the message than with your connection to the characters or story. And this message is preaching to the choir, much more likely to reassure those who are already believers than to engage those who are seeking answers.

The events of the first film are swiftly recapped via headlines and photos in the opening credit sequence. Zamperini (now played by Samuel Hunt) was a high school track star who competed in the 1939 Berlin Olympics, became a bombardier in the US Army Air Force, was shot down, then presumed dead, then rescued.

The movie opens in 1950 Tokyo as Zamperini visits the camp where he was held prisoner, accompanied by a reporter from TIME Magazine. Before we see what he will do there, we go back five years to his return home after the war, with the warm welcome from his loving family every returning hero deserves. But he feels isolated by the inability of even those who love him to comprehend what he has experienced and who he has become.

He feels even more alone than he did in the POW camp, where he supported and was supported by the other prisoners. The only story he will tell his family is one that will reassure them: how every single day the men asked him to describe his mother’s cooking in detail, every ingredient, every seasoning, every smell, every taste. He does not tell them that at night he has nightmares of the weeks adrift in the raft and of being tortured by the notorious prison commander Mutsuhiro Watanabe, known as The Bird.

The Army asks Zamperini to tour, telling his story and selling war bonds. He starts to drink too much on the road, and his Army escort sends him off to Miami to “get yourself a suntan and lay off the hooch.” Zamperini meets Cynthia (Merritt Patterson) on the beach and they get married. He will not tell her about his experiences, either, though she gets some idea when he runs out of a theater when a newsreel shows scenes of Japanese war criminals on trial.

The stress intensifies when he cannot get a job and Cynthia gets pregnant. At first, it seems he can find purpose when he begins to train to compete in the 1948 Olympics, but a fall adds new damage to an old injury and can no longer run.

Zamperini is devastated. When he was in training, “I was whole again,” he tells Cynthia. When he runs, “all the terrible things go away.” Now all the terrible things come back, and he drinks to keep them from scaring him. He has hit bottom when Cynthia takes him to hear Billy Graham, played by Graham’s real-life grandson and namesake, Will Graham. Instead of blaming God for his troubles, Zamperini learns to let God forgive him so he can forgive others.

A post-credits scene shows us a black and white clip of the real Graham and Zamperini, who have more heart and spirit than the actors who portray them can manage. In small parts Gary Cole as a therapist and Vanessa Bell Calloway as a sympathetic neighbor create more nuanced and fully human characters than any of the leads are able to muster. One reason is that too much of the dialog is weighed down with exposition. The attempts at light-hearted banter are just as clunky.

It is good to see Pureflix attempt a more ambitious mainstream story, and, in a few scenes like Zamperini’s first nightmare at home, a more ambitious kind of storytelling. But it is unfortunate that instead of exploring the universal challenges and complexities of forgiveness it stays within the safer confines of preaching salvation to those who have already been persuaded. 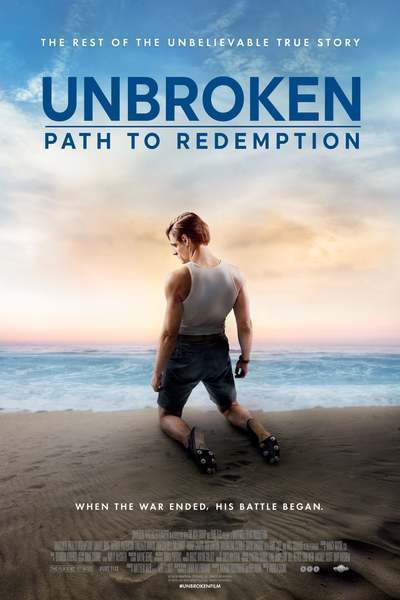 Will Graham as Billy Graham

David Sakurai as Watanabe 'The Bird