Dinesh Das Sabu is a person with a special story to tell, a story that proves worth experiencing through his reflective, heartfelt filmmaking. In "Unbroken Glass," he shares with the world his family: five charismatic siblings and the two parents who were dead by the time Sabu was six years old. The latter figures are ghosts in photo books, their absence leaving as many questions about the past as the children’s future. As one of the siblings, Sabu presents viewers with an intimate portrait of "Mommy" and "Daddy," which includes elements of mental illness (his mother had schizophrenia and later committed suicide a month after her husband's death) and heavy blotches of anger (his chemist father was abusive and then died of stomach cancer). Built from photo books and kitchen table conversations, “Unbroken Glass” is a fascinating look into how we are caught between influences of our past and present, especially with the life-changing bond of family.

“Unbroken Glass” is told in a very man-with-a-movie-camera way, in which Sabu captures different family member interactions with minimal, sufficient coverage. It starts with him riding a train and then looking into a mirror with a camera in hand, but this years-spanning project doesn’t pan out like a journey. It’s more a mystery movie that’s equally about sharing and investigating a family with the audience, as Sabu's siblings, aunts and uncles talk on camera about who his parents truly were.

In his first talking head interview sequence, Sabu takes viewers to a reunion with his siblings in Albuquerque. Sabu's brother, Sandeep, says on camera that he doesn't feel comfortable talking about this, and asks to not be interviewed anymore. But his older sisters, Rashmi and Seema (who raised their younger brothers after their parents passed) reflect upon their memories of their mother, and create in turn a complex idea of a young woman who moved from India to America, became a housewife and mother and then started to deteriorate from mental illness.

Sabu then takes us to India with him to see a family wedding, which is an opportunity to see where his mother grew up; the same first-person angle motivates later scenes where Sabu expresses his own anxieties to the camera about what mental illness might be in his blood. During all of this, Sabu is more like the host of this insight into his family history than an arced-out nonfiction subject, despite all of the time we spend with him and chronologically so. And for a documentary with a lot of dramatic weight, there are no huge moments, as in those types of climactic sequences or revelations in docs that would be just as potent out of context. But that’s where the personal perspective shines, and where an outsider’s take on Sabu's family and story would likely ring false.

Throughout, pictures prove to be a significant, effective part of Sabu’s storytelling; it exemplifies the crucial emotional calibration of this story that they reveal so much. The siblings are smiling, laughing with each other in a home in which they live alone, like “box car children” as Sabu says himself. Pictures are too often used in documentaries as visual information placeholders, but with “Unbroken Glass” they seem very carefully chosen to give dramatic depth, and in turn promise fascinating stories. Most of all, you can piece together what physically being in the Sabu household might have felt like.

Sabu’s film thrives on its emotional delicacy. For the most part, Sabu has a steady hand, even if some edits can simply push the expressiveness too far (a sappy fade from wise sister Seema’s face to a bright blue sky, for example). But it can be a genuinely funny story too, like when Sabu shows us preparing for a Hindi wedding dance or when he meets his father’s chemist friend, who is lovably hardcore about the sun being made of iron (he boasts to Sabu about his new license plate: “FE-SUN.”)

The story here is of a family, but Sabu's inspired take on it doesn't provide a narrative so much as fragments. And while movies, either narrative or documentary, may have the ability to feign tidiness, "Unbroken Glass" reminds you that life is clearly not like that at all. This is a special documentary that gives you a great sense of the personal questions that its filmmaker, and his family, will be wrestling with for many kitchen table conversations to come. 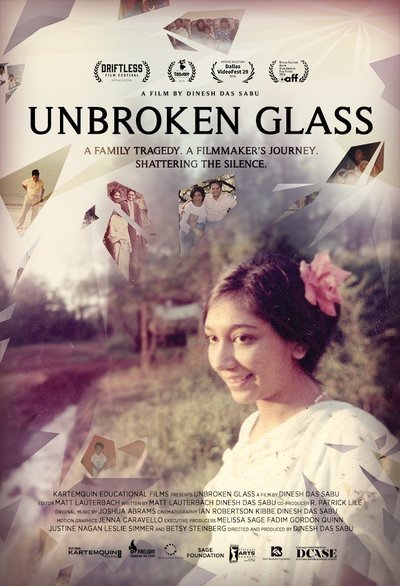