Lila, the Cuban teenager who is one of the lead characters in Lucy Mulloy's first feature, "Una Noche," says in voiceover that she watches the people return to Havana from Miami, tourists now, and they seem changed: "They lose that nervous desperation." Nervous desperation is the energy of "Una Noche," a sexually charged and tense film that takes place over the course of one very long day in Havana, as three teenagers scheme to put together a raft that will transport them the 90 dangerous miles across the ocean to Miami.

After that, their plan gets a little dim. One of the teens has a long-lost father who is in Miami, supposedly, so maybe they'll look him up. None of them speak English. Mulloy also wrote the screenplay, and spent years in Havana researching and finding the perfect non-professional actors who could handle this material. It is a confident and striking debut, with gorgeous and somewhat tragic footage of current-day Havana, in all its dilapidated splendor. The plot hurtles along on its rickety rails, plunging towards that expanse of crashing ocean that represents freedom and escape. Despite the bleak-ness of the situation, the film vibrates with color, noise, music, ferocious arguments (both serious and teasing), and eye-catching snapshots of everyday life in Havana.

Lila (Anailín de la Rúa de la Torre) and Elio (Javier Núñez Florián) are twins. Their parents are not so much neglectful as totally preoccupied with their own marital drama. Father is cheating on mother, father comes home and berates mother for the messy house, and so life at home is a big drag. Lila spends her time at the gym taking Taekwondo classes, and being made fun of by the more glamorous girls for her unshaved eyebrows and hairy arms. But her primary relationship is with her brother. Elio works as a cook in a hotel restaurant. He rides his bike along the cracked streets overgrown with weeds, with Lila sitting behind him. He looks out for her, she looks out for him.

But Elio has a secret. Well, a couple of secrets. One is that he is helping his friend Raul (Dariel Arrechaga) put together a plan to get Raul to Miami to find his father. The other secret is deeper and can certainly be guessed at through behavior through the film, although the "reveal" doesn't come until late.

Elio is resourceful. He knows he needs to procure inner tubes, lumber, a compass, and maybe even a GPS, for the journey. All of this can be found on the flourishing black market. There is one fascinating scene where Elio trades in his bike for an outboard motor (no gasoline included) from a guy who buys and sells things, anything you want, as long as you have something to trade.

It all feels quite precarious, and it is. How does one plan for a getaway and yet also maintain the facade that you are not going anywhere? Elio doesn't want to tip anyone off, least of all his sister. But Lila is a sneak and a spy, following her father around, spying on Elio from around corners and palm trees. She can tell that something is up. And she does not like Raul.

Daniel Arrechaga is fantastic as the hot-headed and tormented Raul. He dresses flashily, and dreams of all of the gold chains he will get when he is in America. But the bravado hides a hurt child, abandoned by his father, and now the sole caretaker of his prostitute mother (Maria Adelaida Mendez Bonet) who is also ravaged by AIDS. When we first see his mother, she sits in a dark room, her face drawn and haggard, with a full-body cough. She tries to make her son drink warm milk, and he makes her drink it instead. Later, we see her under a highway overpass, standing with all of the other hookers, going off with a tourist who makes her an offer. It's harrowing. Later, Raul comes across his mother servicing a Western tourist, and accidentally injures the man. The cops are put on Raul's trail. Any sense of delaying his escape is lost. He must leave now, before the cops find him.

The three kids who play the three leads are wonderful in their roles, with that superb naturalism and intuitive power that can come in non-professionals. They know who they are, they know their relationships, they know the stakes. Raul starts drinking halfway through the day, and finds himself in scrape after scrape, and there's a feeling of danger and unpredictability surrounding the guy. But you love him. You love him so much.

Lila and Elio are completely believable as siblings and twins. They are in tune with one another's emotions, they speak in short-hand, and there is an ease and freedom in their body language together. The film ends with a frozen shot of the two of them on the bike which sums up all we have learned about them. (A side note: two of the leads, de la Rua and Florian, disappeared during their trip to the United States for the film's U.S. premiere at the Tribeca Film Festival in 2012. They were supposed to come to New York from Miami, but instead they stayed in Miami, stating that they were seeking political asylum in the United States.)

Havana jumps off the screen in a visceral way. You can smell it, feel it, like a living presence. Raul complains at one point, "The only things to do here are sweat and fuck." The entire atmosphere is jagged with rampant sexuality, street harassment, open prostitution, and cruel jokes. Every interaction takes on a sexualized tone, bordering on violence, which Lila finds tiresome. It takes a lot of energy to bat that nastiness away. You can sense the exhaustion.

Mulloy has a great eye for the unique, the special, in this landscape. There's a lonely shot of Elio riding his bike along the deserted waterfront on a grey day, with the tropic-green waves crashing over the sea wall in towers of foam.  Havana is a rich cultural landscape, but Mulloy and her cinematographers (Trevor Forrest and Shlomo Godder) zoom in on the particulars. A yellow canary sits in a cage hanging on a hook outside a building. Windchimes of colored glass sway against the white stone background. A hooker's black shoes lie on grimy tile with a wire of Christmas tree lights snaking up the wall, lending garish romantic atmosphere to a transaction devoid of romance. Old withered guys clack dominoes at a table on a sidewalk. Kids run wild in the parks, leaping from the sea wall into the ocean. The cars that glide through the streets are all brightly colored gigantic gas-guzzlers, with gleaming fins from the 1950s, but a closer look shows the decay, the deteriorating steering wheels. These are details, snapshots, fragments, but put together they create a fully-inhabited, three-dimensional reality.

The use of voiceover is problematic, especially when it describes what is already evident in the behavior; Lila tells us "I didn't know why Elio was being so secretive" after we've already felt the distance opening up between the siblings, and sensed Lila's anxiety at what will happen if Elio abandons her in Havana. But that would count as a nitpick, especially with a film as strong, as sure, as this one. 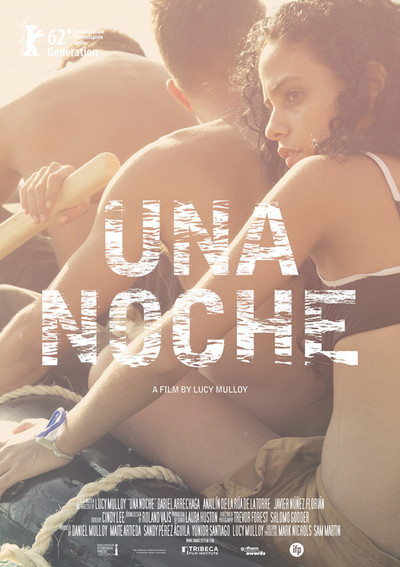