Sixteen-year-old Mark (Jamie Blackley) sits in a cold interrogation room in the opening scenes of "U Want Me 2 Kill Him?" and is asked why he stabbed John in the alley. Mark answers, "For the greater good." Based on a true story, which dominated British tabloids in 2003, resulting in a groundbreaking legal case (and inspiring an opera), "U Want Me 2 Kill Him?" takes us through how Mark arrived at that particular creepy answer. The facts of the case almost beggar belief, and were told, in full, in a 2005 Vanity Fair article by Judy Bachrach. The film assumes we do not know the story. Director Andrew Douglas, who helmed the "Amityville Horror" remake in 2005, and screenwriter Mike Walden, have chosen to structure the film like a typical thriller police procedural, with a jumbled chronology and a third-act reveal when the truth comes out. It's effective, in its way, and the acting is excellent, across the board. But "U Want Me 2 Kill Him" side-steps the real fascination with the story, its real guts, which is: Why?

Criminal duos are endlessly interesting due to the psychological questions they bring up: Would either of the individuals have acted alone? Would Macbeth have done what he did if he hadn't had his wife whispering in his ear to "man up"? Would Leopold and Loeb have ever committed that crime by themselves? What is in the alchemy of the respective pairings that created this murderous third? Cinema loves its deadly duos, from "Bonnie and Clyde," to "Heavenly Creatures," to "Gun Crazy," to "Don't Deliver Us From Evil", the list goes on forever. The pairing in "U Want Me 2 Kill Him?" is different in many important ways, mainly because Mark is unaware that he is being played. He was a dupe, a fool of a much more cunning individual. What happened to Mark that made him open to the whispered sinister suggestion, what was in him (or not in him) that made him blindly accept everything at face value?

Mark lives with his parents in Manchester. He goes to school, he's popular, and he has big vague dreams of doing something that nobody has done before ("like create the Internet.") His parents are nicely drawn individuals, the father who lifts weights and tells his son to be "his own Master", while the mother compulsively buys lottery tickets every week. Meanwhile, Mark has a whole world they do not know about. Every night he sexy-chats online with a girl he has never met, a pretty blonde named Rachel (Jaime Winstone). Not only is Rachel great at dirty talk, she is also (and this seems to be the most attractive part to Mark) a damsel in distress. She is afraid of her violent boyfriend Kevin (Mingus Johnston). She has secrets. She also happens to have a little brother who goes to school with Mark, a geeky weird kid named John (Toby Regbo). John gets bullied. Rachel pleads with Mark to look out for him.

Mark and John, somewhat improbably, become friends, after Mark beats up some of the bullies. The two hang out, John opens up to Mark about all of his problems, how worried he is about his sister Rachel, how much he hates how he is treated at school. Through John, Mark learns more about his mysterious night-time Internet friend, Rachel. Her boyfriend is in the witness protection program, she has cut ties with the family, everyone is afraid she is in danger. Ominously, Rachel stops contacting Mark. When Mark confronts John about this, John tearfully tells him that Rachel is dead, probably murdered by Kevin.

Mark is devastated. He starts lifting weights. He fools around with his dad's gleaming sword, slicing through the air in his living room, lost in a fantasy of revenge. Things take a turn into the definitely bizarre when an MI5 agent contacts Mark, via IM, and warns him off Kevin, saying that MI5 is tracking Kevin for their own byzantine conspiracy-theory reasons having to do with counter-terrorism. Mark never once questions the credibility of those he encounters online, and never once asks why on earth an MI5 agent would not only reach out to him personally, but enlist his help in another one of their operations. Mark's credulity is certainly believable, and one can sense that this is a boy who doesn't know what he wants to do in life, his grades are not all that good, and he wants to make a big impression on people. He's a perfect "mark", in other words.

The puzzle-piece timeline, starting with the crime and the ensuing investigation (led by a police inspector, played by "Downton Abbey"'s Joanne Froggatt) mixed with flashbacks to how it all began, works, but the real horror, of why this might have happened, is ultimately lost in the cliched genre-trappings of the story's structure. Instead what we are given is a cautionary tale about being wary of the folks you meet on the Internet, which has been done before and done better. The reason this story ignited debates that persist to this day is the "why" of it. How was Mark so manipulated?

Douglas has used an almost entirely blue palate, drenching the film (too much at times) in cold paranoia and isolation. There are some great visuals, John and Mark approaching Kevin's towering tenement building, dwarfed by its sheer stone walls, or the two boys strolling on a rock jetty by the seaside, almost entirely surrounded by water. Mark looks out at the boats in the sea, and they seem misty and glamorous and far far away. These are tantalizing glimpses, hinting at the deeper psychological abysses at play here, but they are left unexplored.

By holding back on the big "reveal", by prioritizing the desire to "sting" the audience at the end, "U Want Me 2 Kill Him" stays frustratingly on the surface. 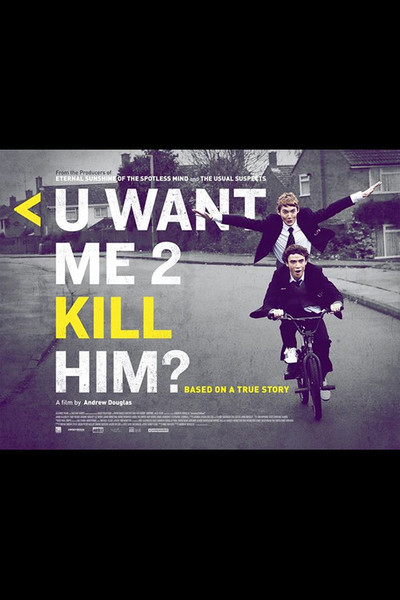