Even taken simply as a deliberately formless freak-out, the kind that used to turn up regularly back in the heyday of the midnight movie circuit, "Tyger Tyger" proves to be little more than a tedious bore. The film is set in a vaguely indeterminate time and place—one that seems to have based its teachings mostly on lesser '90s-era indie films—and as the movie opens, we learn that there's a pandemic raging, forcing people to figure out a way of acquiring the super-expensive medication required to save their lives. While waiting on the results to see if she herself has contracted the illness, Blake (Sam Quartin) and her ne’er-do-well boyfriend (Max Madsen) rob a pharmacy of their stock of the prized medicine and flee with the help of her mute friend Bobby (Nekhebet Kum Juch). Blake is not a mere criminal, however—she has taken the medicine so that it can be distributed to those in need—but when the boyfriend decides that he wants to keep it all for himself, Blake dumps him and hits the road with Bobby to deliver the medication to a remote commune in the middle of nowhere.

During the initial robbery, Blake has a bizarre meet-cute with junkie Luke (Dylan Sprouse) and before she and Bobby leave town, they sort of kidnap him so that they can have another person to help share in their adventure, and so that the film’s producers can have a semi-familiar name to put on the poster. Anyway, they arrive at the town after about 30 minutes or so and then spend most of the rest of the film wandering around aimlessly and engaging in pseudo-profound discussions that feel like a collection of acting class improvs that go absolutely nowhere. Along the way, the three befriend the group’s de-facto leader, Emerald (Thea Sofie Loch Naess) and run afoul of a couple of nutters (Craig Stark and Eden Brolin) who, along with the ex-boyfriend, eventually turn up for what passes for the film's idiotic and enraging climax.

According to the press release, “Tyger Tyger” describes itself as a “Fantasy-Thriller” but, based on the available evidence, both of those words could easily sue for damages on the basis that there's nothing remotely on display resembling anything that they represent. The screenplay from writer/director Kerry Mondragon starts off slow and grinds to a stop, without offering any insight into any of the subjects that it half-heartedly brings up via the singularly uninteresting characters. And visually, it's a collision between a home movie and a post-apocalyptic fashion shoot gone awry and fails to offer up a single interesting shot to speak of at any point. As the central characters, Quartin and Sprouse are bland as can be, while virtually each and every member of the supporting cast appears to be operating under the assumption that they have the Dennis Hopper part and (over)act accordingly.

The problem isn't that “Tyger Tyger” is an incoherent mess but that it's a boring incoherent mess—the kind that's too listless and dull to even work as a truly awful movie. Watching it lurch from one meandering scene to the next (before arriving at its singularly enraging denouement), it feels as if Mondragon just shot a bunch of footage and strung it all together without ever devising any reasons for showing interest in the narrative, such as it is, or the characters, such as they are.

Now playing in select theaters, at drive-ins, and available on digital platforms. 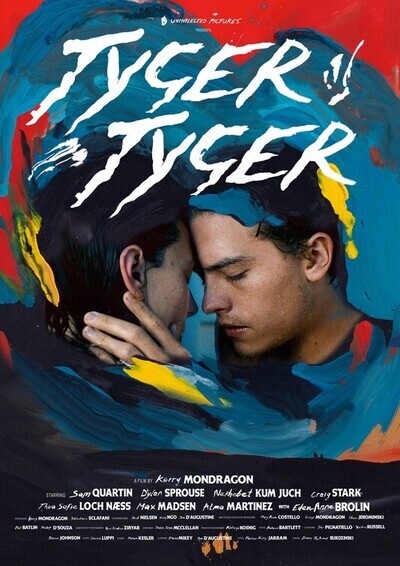