The grey-bearded Hanif once lived a life of crime, and served time in prison for selling drugs. Now he’s changed. A Black Muslim, Hanif works as a casket-maker and ritual body washer in Newark, New Jersey. At the core of his solemn job lies a great irony, in that everyday he arrives at his gig he symbolically closes one person’s life yet is grasping to a second chance at his own. After hills of mistakes, Hanif works tirelessly to mentor a couple local boys, Naz and Furquan, so they might avoid repeating his past errors, and the possibility of an untimely death.

Filmed in a rich black and white, director Zeshawn Ali’s documentary and feature debut "Two Gods" is an intimate, lyrical exhumation of the cycles that haunt Black youth and the challenge of putting to rest old habits.

Hanif’s Newark neighborhood is beset by violence: Black men, especially Black Muslim men, are dying at an alarming rate. “Tired of patching your bullet wounds. Tired of putting your skulls back together,” says Rashad, the owner of the casket shop, at a gathering commemorating another fallen Black teen. At the funeral home Hanif sees them all, even his friends. And while Hanif loves his job, he jams out to Queen Pen’s “Party Ain’t a Party," constructing these simple caskets, taking equal care in his ceremonious responsibility. Ali’s delicate lens, for instance, surveys how diligently Hanif washes the body of a deceased man: warm water, always keep your left hand free, a cloth for covering. In one scene, a young boy takes part so he might know the rituals needed for his father. The sequence is one of the many ways Ali shows generational knowledge being passed down.

Though the slender, energetic Hanif looks after the dead, he’s similarly attentive to the living. He brings Naz, a teen looking toward Islam for a path away from the streets, Furquan, an adolescent child trapped in a physically abusive household, and his son Tyler into his orbit. Hanif teaches them the casket-building trade partly to bond, partly to warn: this could be for you one day if you head down the wrong path. He also counsels them when they’re in trouble by preaching patience.

But the effort Hanif puts into Naz and Furquan isn’t enough to dissuade the realities of their lives. Naz falls in with the wrong crowd, and the police seem to unfairly target him. Furquan’s house descends into an untenable environment, and at school he begins to utilize the same vicious tendencies he sees at home. Even Hanif falls back into dangerous old habits. The black and white photography Ali employs cultivates the liminal tenor wrought by these tensions. The transfixing milky color of the washing water, for example, exudes a sense of spiritual purification, leaving the cycle behind. And the grainy cinematography reveals the inescapable truths of their surroundings.

Eventually, Ali splits his film between two religions: Naz and Hanif’s Islamic beliefs and Furquan’s Christian worship. Both churches provide these figures a semblance of stability. Yet I felt unsteady. “Two Gods” is clearly a multi-year project. We follow Furquan from his early days in Newark to his later high school wrestling success. Naz’s schooling is up in the air for an extended period of time due to legal troubles. Hanif commits a big mistake and takes a great deal of reflection to grasp the consequences. But the further we proceed into their timelines, the less I felt connected to their realities. Important events whizz by without context. Large catastrophes seem magically solved.

Though Hanif considers the funeral home his life—Khadija is the funeral director and Rashad is the owner of the casket shop—Ali keeps us at a distance from exploring the business dynamics. Why does Hanif sleep on a couch? What isn’t he being paid to make him consider going back to his old life? Hanif’s job never totally adds up. That incongruity breaks the documentary’s meditative spell, causing the last third to feel as impenetrable as the aforementioned milky water. Even so, Ali’s “Two Gods” elucidates profound meaning from Hanif’s important trade by taking interest in people of color while we’re still living, not just in our deaths. 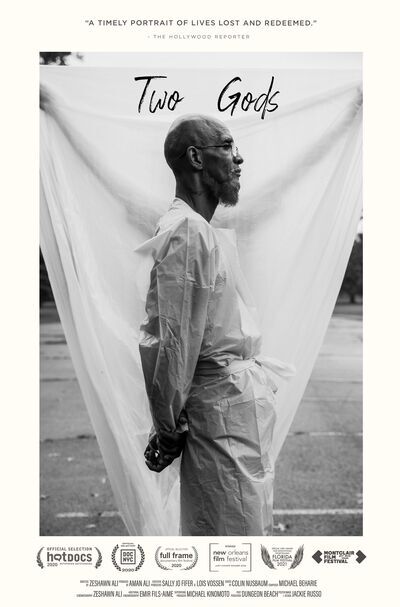