Back in middle school, when she was barely a young teen, this critic had, ahem, a massive crush on a boy one year her senior.

I can’t recall if we were already a couple when I foolishly filled my notebook with his name and some sappily romantic sentiments one evening, not knowing that the embarrassing pad would soon be discovered by my annoyingly overprotective detective of a mother. But I do remember sweating in shame, fear, confusion, and panic when she yanked the notebook from under me (in desperation, I sat on it to unsuccessfully hide the evidence of my young love) and started flipping the pages in utter shock and anger.

Now imagine my astonishment during Oscar-winning “Bao” helmer Domee Shi’s masterful animation “Turning Red,” while I watched its 13-year-old central character undergo a similar episode with her own mother! The heroine in question is the overachieving Meilin (Rosalie Chiang)—Mei for her loved ones—growing up too fast with her budding hormones and changing body amid her Chinese-Canadian family in the Toronto of the early aughts. A slightly dorky straight-A student she may be, but there's nothing anyone could do to stop her from noticing all the good-looking boys—particularly a local store clerk—that she and her best friends frequently gush over. That anyone includes her disciplined, willowy mother Ming (Sandra Oh), who discovers Mei’s notebook of suggestive heartthrob drawings in furious disbelief. What’s Mei to do if not literally turn red and POOF, transform into a furry, monstrously cute red panda in the midst of navigating all these intense emotions? (Why hadn't I thought of this when I was similarly busted? And more importantly, where was this movie when I was growing up?)

And that is the genius of “Turning Red,” a radical, brazenly hormonal PG movie that instantly fills a huge void in the lives of awkward, novel female teens who might just be starting to crawl out of their childhood cocoons with a disharmony of mystifying awakenings and sexual feelings. That achievement is perhaps no surprise coming from Pixar, a studio that can always be trusted for a generous dose of reflective, grown-up nostalgia as well as a good old-fashioned coming-of-age saga. After all, weren’t some of the best characters of the fiercely inventive animation house—from the talking dolls of the “Toy Story” franchise to the corporeal feelings of “Inside Out,” the rebellious princess of “Brave,” and the aspiring young musician of “Coco”—gloriously defined by its signature preoccupations? Still, “Turning Red” (which deserves a lot better than the straight-to-streaming fate Disney has bestowed upon it) feels pioneering and surprising even for the shop behind the groundbreaking animated sci-fi “WALL-E.” For starters, never before has a Disney female ever been asked, “Has the red peony blossomed?” as an inquiry about the start of her menstruation.

In that regard, “Turning Red” is both a triumphant thematic homecoming for the company and a welcome outlier within the Pixar canon that is, exceptions aside, typically over-flooded with male-centric narratives. What’s even greater about it is its recognizable foundation carrying shades of various superhero tales and the likes of “Teen Wolf” (the 1985 one). You know, stories in which boys and men hide behind their alter-egos while they make sense of the new eyes through which they see the world. Written by Shi and Julia Cho, “Turning Red” passes this familiar baton to Mei, unearthing something that is both culturally specific and universal through its Chinese-Canadian protagonist clearly fashioned by the co-scribes with heaps of personal memories and loving insights.

It’s certainly a delight to follow Mei once she discovers her inner red panda and figures out that as long as she keeps a cool and collected demeanor sans emotions with a little help from her friends, the pink brute won’t take over. Who knows, she could perhaps even lead a normal life and even have some fun along the way. But that’s easier said than done when you’re a teenage girl defined by your wobbly mood swings and the time you spend with your equally frenzied group of friends. In Mei’s case, her girlhood clan consists of the sharp-tongued Abby (Hyein Park), nonconformist Miriam (Ava Morse), and the nonchalant Priya (Maitreyi Ramakrishnan). Together, the celebrated quartet swing from one trouble to the next, trying to do everything they can to see their dreamy boy band 4*Town in concert. (The five-member band does have some actual bangers in the film, written by Billie Eilish and Finneas O’Connell.) But with Mei’s plush red panda slightly altering their plans, the friends finds themselves at a crossroads that directly concerns the young Mei’s future.

As it turns out, Mei had been cursed with a spell passed on through the generations of women in her family. And it can only be broken if she willingly participates in a strenuous ritual that would keep her nuisance alter-ego safely tucked away forever. Through this dilemma, Shi beautifully constructs a traditional tale of generational clash between Mei and her mother, filling their unity and contradictions with thoughtful details of their urban life: the family temple they run as a tourist attraction, the elaborate, studiously cooked meals, the domestic support that runs deep within their household. The animation style—infused with traditional motifs, interludes of anime, and a zippy energy—rises to the occasion, vividly painting Mei’s world with the same level of intricacy Shi and Cho conjure up on the page. While the film’s slightly bloated finale overpowers some of the leaner moments that come before it, “Turning Red” flickers with a bright feminine spirit, one that feels new, crimson-deep, and unapologetically rebellious. 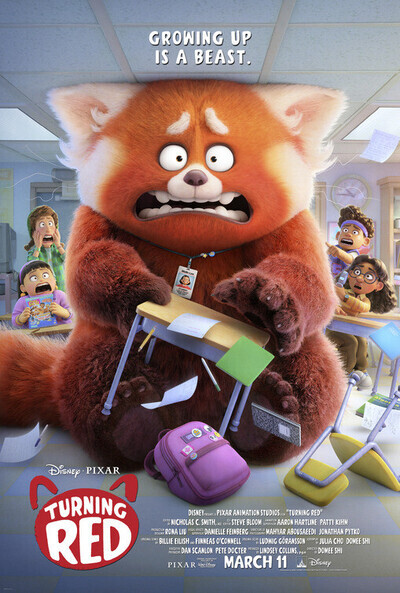