Trumped: Inside the Greatest Political Upset of all Time

This hastily thrown-together documentary was a late addition to this year’s Sundance Film Festival and premieres tonight on Showtime, likely trying to get on the air before Donald Trump has done enough to warrant a sequel or two. It’s true that so much has happened on the national scene in just the last ten days that “Trumped: Inside the Greatest Political Upset of All Time” already feels a bit dated. Remember Jeb Bush? Remember the debates? Remember Election Night? Of course you do, and “Trumped” plays way too much like a highlight reel from the last year, offering not nearly enough insight into the questions surrounding Trump’s campaign and now-Presidency. This is more of a movie that chronicles that he won, not how he won—those are two very different things. Just in the chronicling, a few interesting tidbits and insights come forward, but it was likely too soon to make this movie, as we don’t fully comprehend what happened in the Election Year of 2016 quite yet. There will be a great documentary about it eventually. This will do until then.

“Trumped” came about as a collection of footage from Showtime’s “The Circus,” a show about the political process, featuring John Heilemann, Mark Halperin and Mark McKinnon. Directors Ted Bourne, Mary Robertson and Banks Tarver went through the thousands of hours of footage from that show to form it into a documentary focused on Trump’s campaign. The problem is that there’s a lot of story to tell here, and “Trumped” tries to hit all of the major points. So, we get his announcement, his battles with each of the GOP candidates, each of his controversies, the debates, and his inevitable win—all in straightforward, then-this-happened fashion. When the people behind the show offer insight into how Trump is handling issues or how the media is handling him, “Trumped” comes to life. But that’s simply not often enough to recommend it.

So what does one learn from “Trumped”? One interesting thing is how much the film defies the idea that A) Trump never really wanted to be President and B) He ever thought he was going to lose. Call it ego if you will, but the Trump captured here always wanted the presidency (and there’s interesting interview footage in which he discusses politics from as far back as 1980) and knew his approach was going to get him there. Trump’s greatest victory was in realizing that he was the first president that didn’t need the media as a go-between, and so he could use them as he saw fit (and he’s still doing that, for the record). He could go straight to his base, either through Twitter or at rallies, and that allowed him to galvanize people in a way politics had never seen before. He also knew more about branding than any politician before him, understanding that things like “Lyin Ted,” “Little Marco” and “Crooked Hillary” would work.

There a couple of interesting interviews aboard Trump’s plane in which his act feels a little different, and we see a side we didn’t often this past year. There’s some footage at the Javits Center in the final minutes about how Hillary wants to heal the nation that her supporters and those inflamed over actions already taken by the administration will find depressing. Most interesting are the interviews with Roger Stone, a close ally of Trump’s, who’s writing a book called The Making of a President 2016. He not only understands Trump, but understands how to get him to the people. I would have liked more of that behind-the-scenes “War Room”-esque material and less re-assembling of footage we’ve already seen. It’s 82 minutes into the film before we really get into a conversation about what a Trump victory means—how did it work? What did he tap into? They mention that this victory was a seismic change in politics, but “Trumped” doesn’t seem to fully understand how it happened. The ground is still shaking to such a degree that I’m not sure any of us do yet. 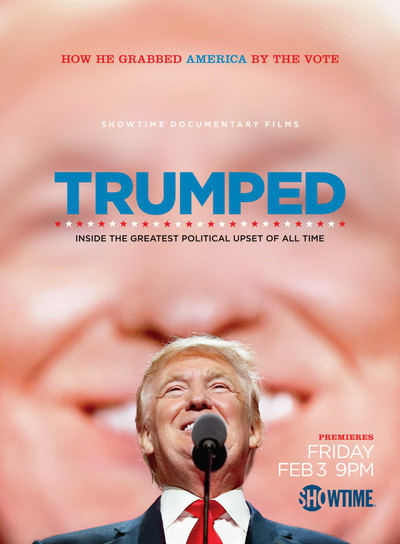 Trumped: Inside the Greatest Political Upset of All Time (2017)

Donald Trump as Himself (archive footage)