Ten years ago, David Grann's article "Trial by Fire" appeared in the New Yorker, with the subhead: "Did Texas execute an innocent man?" Cameron Todd Willingham was executed in 2004 for murdering his three children by arson in 1991. Grann painstakingly digs through the shoddy investigation, the rushed trial, Willingham's appeals (Willingham never pled guilty), and makes the case that yes, Texas executed an innocent man, and Texas knew it executed an innocent man. Just reading the article is enough to make your blood boil. Edward Zwick's film "Trial by Fire", starring Jack O'Connell as Willingham and Laura Dern as Elizabeth Gilbert, the playwright who took an interest in Willingham's case, is a blistering polemic, even though Zwick's approach is pretty workmanlike. The film plods at points, trudging along, and there are a few misguided narrative "devices" tacked on, but still, "Trial by Fire" bristles with anger.

The opening sequences show in no uncertain terms that there was something fishy at Willingham's trial. Willingham was a notorious figure in the small town of Corsicana, Texas. He was a drinker, a bruiser, and had a volatile relationship with his wife Stacy (played here by Emily Meade). The investigation into the fire which engulfed their tiny house seems rushed, as though arson is the only possibility, and during the trial witnesses inexplicably changed their stories. The neighbor, who saw Willingham breaking windows, trying to get back into the house, suddenly testified that he hadn't seemed upset at all, he seemed more worried about his car. (Willingham later said that yes, he moved his car away from the house but only because he was concerned it would explode from the nearby flames). The prosecutor makes a big deal about Willingham's love of heavy metal, and its possible connections to Satanism (shades of the West Memphis Three). Willingham does not have money for a proper attorney, and so his defense is lackluster. Willingham yells out complaints from his spot in the courtroom, to no avail. He is convicted and given the death penalty.

Even for someone who hasn't read Grann's article, it's obvious that Willingham didn't do this. And because it's so obvious, these sequences—although enraging—somehow lack tension. "Trial by Fire" is filled with this weird mix: lack of tension alongside an enraging sense of injustice.

When Elizabeth Gilbert (Laura Dern) enters the story, she does so through a prison outreach program, volunteering to correspond with a prisoner. She is assigned Willingham. They eventually meet, and their series of conversations through the glass partition are central to "Trial by Fire," showing Gilbert's transformation from a shy and uncertain woman, dealing with her own problems (two teenage kids who don't get her obsession with a murderer, and a dying ex-husband), to an impassioned advocate for Willingham's innocence.

Zwick is more comfortable in Gilbert's middle-class world than Willingham's world, and this is an issue, especially since Zwick and screenwriter Geoffrey Fletcher stick close to the chronology Grann used in his New Yorker article. Zwick knows Gilbert's world first-hand, and it shows, the film settling into an atmosphere of book club girl-chat, rushed breakfasts and parental concern. Many of the flashback scenes to Willingham's past are the opposite of lived-in, with a lot of flailing about and Stacy yelling lines like, "You think you can stay out all night and come home and sweet talk me?" "Trial by Fire," for all its empathy, is totally outside the experiences of people in such dire economic circumstances.

Laura Dern galvanizes projects with her sense of authenticity and truth, and she does so here. She is the one who unleashes the film's sense of anger and helplessness. Gilbert begins her own investigation into Willingham's trial, uncovering inconsistencies in the trial documents, even tracking down Dr. Gerald Hurst, a famous fire investigator, begging him to look at the evidence and weigh in. (Grann's article is very good in explaining how arson investigations can be botched by incorrect assumptions about how fire operates.) The eccentric Dr. Hurst is played Jeff Perry, a wonderful actor (and an original co-founder of Steppenwolf Theatre). In a great stand-alone scene, Hurst takes one look at the evidence in the crime scene photographs and immediately sees that the fire wasn't arson, was, in fact, probably caused by a faulty space heater.

Zwick and Fletcher have added some "flourishes" which don't work at all, particularly the device of having the ghost of one of Willingham's daughters visit him in prison, sitting on his bunk, chatting with him. This device is familiar from Zwick's work on "thirtysomething," the television series he co-created with Marshall Herskovitz, where straight narrative was interspersed with wild fantasy sequences, launching you into the headspace of the characters. But here, it's awkward, super-imposed. Equally awkward is Willingham's developing friendship with one of the prison guards, a man initially hostile to him. "Trial by Fire" is a very angry film, and these choices are unnecessary and sentimental.

"Trial by Fire" is a weird mix. It's a rage-ball of a film, a furious op-ed column (with extant footage of then-governor Rick Perry praising Texas' death penalty laws), but also a conventional melodrama about a woman neglecting her resentful teenage kids the more she gets wrapped up in the case. Dern's passion is so palpable it makes you wonder why the story wasn't told from her point of view. Only in her face, in all its passionate sincerity, do you feel the literally incendiary nature of the injustice taking place. 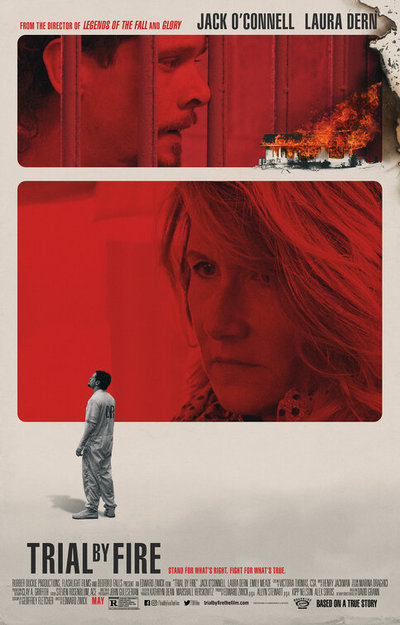 Writer (based on The New Yorker article by)