“Trespassers” is fairly timid, as far as home-invasion thrillers go: it’s got some machete- and gun-related violence, a couple of leering masked killers, and a little rough sex, but that’s about it. Which is a shame, since cinematographer Noah Rosenthal shows some promise in scenes where indigo and violet lighting and IKEA catalog-precise camera blocking pin viewers’ eyes to otherwise undistinguished protagonists: two attractive young couples who rent a posh, secluded desert villa from a mysteriously absent local photographer.

Still, it takes a while for audience surrogate Sarah (Angela Trimbur) and her pouty fiancé Joe (Zach Avery) to realize how dire their circumstances are since they’re frequently sidetracked by their Dramatic friends, Sarah’s passive BFF Estelle (Janel Parrish) and Estelle’s loudmouth boyfriend Victor (Jonathan Howard). I’m only partly joking: Victors spends a lot of time either mouthing off and/or doing cocaine while she kinda just lets him walk all over her. Ah, just like married life: sooner or later, your friends irritate you so much that it takes you a while to realize, hello, you’re being stalked by a bunch of nihilistic masked killers.

I probably wouldn’t mind the characters’ arduous build-up to a dud of a climax if they (and their predicament) weren’t so underwhelming. Even the soap-opera-friendly reasons for Sarah and Joe’s emotional standoffishness (SPOILER: Infidelity!) isn’t explored beyond a point, because, uh, the characters don’t want to. That’s the most compelling thing about Sarah and Joe and Estelle and Victor: even they don’t want to be in this movie!

I can’t really blame them; they’re all so trusting, with the notable exception of Victor, who scoffs at everybody else’s naiveté, whenever he’s not re-enacting Black Sabbath’s “Snowblind.” Everybody else’s trusting nature is unintentionally maddening since it reveals nothing about their characters or the dilemma that they find themselves in. Ultimately, the killers (who inevitably show up) don’t force anybody to face their repressed fears or pay for their past transgressions: the baddies are just there to prop up the sagging plot. I mean, sure, bad things happen to these good people, but not because the good guys have it coming. They’re just too self-absorbed to notice the corner of the world that they’ve (ever so) slowly backed themselves into.

Honestly, there’s never a moment in “Trespassers” when Joe and Sarah and their circumstantial peril are more compelling than their AirBnB’s Crate & Barrel-worthy decors. Screenwriter Corey Deshon’s pseudo-naturalistic dialogue is generally as unmemorable as the cast’s flat performances, with the unfortunate exception of the scenes where Joe and Sarah baldly explain why they’re walking on eggshells around each other (these scenes I remember, but not fondly). Then again, I did gasp when a machete-wielding killer in the skull mask bashes his way through one of the villa’s windows, but that was mostly because I was interrupted from my daydream of being rich enough to afford a weekend rental in that catalog-perfect villa.

Anyway, “Trespassers” takes a while to get where its title suggests it will inevitably go. Which isn’t a bad thing unto itself, but it is frustrating when you’re stuck hanging out with characters who are struggling to keep their personalities to themselves. I’m not even sure I understand why they don’t want to think about what’s bothering them, either. Are they disengaged from reality and themselves because they’re white, young, and rich? What do they think about when they’re not thinking about each other? And why do they want to be in the desert when they could be, I dunno, anywhere else? There’s a lot of blank space where this movie should be, and I’m not really sure why.

I can, however, tell you that the movie’s violence—both emotional and physical—is about as uninspired as the story and as visually uninspired as, well, pretty much any scene where characters talk to each other. And I can tell you that the schematic nature of the plot is especially annoying given how much time is wasted setting up an inevitable run-in with the local cops (Carlo Rota and Sebastian Sozzi). I can also tell you that there are a couple of promising, but ultimately underwhelming scenes featuring a shifty, unnamed neighbor who’s referred to in the end credits as “The Stranger” (yes, that is Fairuza Balk). And that the Stranger’s dialogue is too thin for a seemingly ravenous Balk to sink her teeth into. Which is a shame, because a horror movie starring Fairuza Balk as the crazy cat lady next door would be amazing. If only fantasizing about “Trespassers” were as exciting for what it is as for what it could have been. 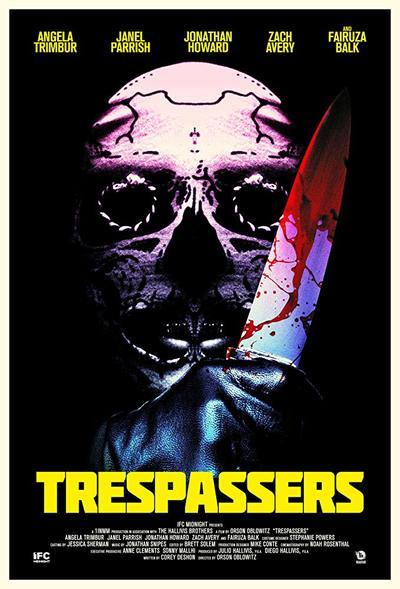