“Tramps” director Adam Leon once said something in an interview that I will never forget. While talking about his gritty debut film “Gimme the Loot,” about two young graffiti writers wanting to tag a New York City landmark, Leon said that his goal was making someone’s favorite movie of the year. That’s quite a novel idea that only interesting filmmakers could accomplish—to make something that speaks to a viewer so directly, it essentially fulfills what they need, what they've been yearning to see. And it proves a fitting statement coming from Leon, given that he’s made a direct companion piece to “Gimme the Loot” with “Tramps,” which has a similar urban verve, style and even more sweetness. But while “Tramps” may be inspired and unusual, it’s hard to shake off the idea that Leon isn't just making the film he wants to see, he's riffing on himself.

Like “Gimme the Loot,” “Tramps” concerns two young people in New York City, getting into an odyssey well over their heads and placing themselves into some mischief. This time it’s Callum Turner’s Danny and Grace Van Patten’s Elle, as their meet-cute is a simple, profitable and possible crime. Pick up a suitcase, make an exchange, get paid later. Danny is doing it to help out his recently incarcerated brother, and we soon find out that Elle is doing it to start her unsatisfactory life anew. As strangers to one another, neither know what is in the suitcase. Still, the stakes of a payday causes enough nervous energy for the both of them, especially when Danny leaves the bag at the wrong spot, and the wrong person takes it.

Despite that mystery, this movie is more about mischief than danger. It gets a lot of mileage out of what could be in that suitcase, but since comedian Mike Birbiglia is cast in the movie to more or less play his persona, whilst wearing baggy khaki shorts, you get pretty comfortable that the bag probably doesn’t contain anything like Marcellus Wallace's soul or even a murder weapon. Like how “Gimme the Loot” had one member of its graffiti-tagging duo walk around the city in socks, “Tramps” prefers innocence. Credit goes to the nifty script by Leon (who co-wrote the story with Jamund Washington), which keeps the story active with jolts of stressful bad luck or completely surprising good luck, all while adhering to the logic the story has set for itself. Throughout their journey, as they search for the rural woman who might have their bag while realizing they might maybe kind of like each other, neither Danny or Elle have anything intriguing to say, but they are fun as a pair. And it’s warming to see them enter into the boonies as a type of new reality, where they role-play relationship life by breaking into a fancy home and bike away wearing the owners’ clothes. Still, it’s “Tramps”’ attitude to be short and sweet that proves definitive, vital.

“Tramps” has a “La La Land”-level nostalgia for the filmmaking of numerous gritty NYC movies from the '70s, and achieves a similar effect, where it comes off as old-school with a level of charm wholly reliant on individual taste. When recreating New York’s bustling and behemoth qualities, Leon uses slow zooms onto two actors who are hundreds of feet away, while their dialogue is captured as if we were eavesdropping on them. This is the kind of film that seems excited about unintentional extras in the background glaring into the camera, whereas productions of similar size but previous eras and lesser filmmaking technology took that fourth-wall breaking as a budgetary sacrifice. “Tramps” specifically yearns for a scrappy and practical look but edges on tacky vintage, especially as its narrative becomes one splash of water away from losing its grit or one wrong music cue from being too twee.

Also like “La La Land,” “Tramps” is a time capsule narrative experiment, in service of a romance that is equally sweet and stubbornly old fashioned. For example, Danny and Elle have fluffy banter at a carnival, while a gorgeous big band-like tune plays in the background. Framed like a dream away from their urban realities, it works. And yet later on, Danny insists to Elle, “I don’t want the girls in my building,” as if “Tramps” was taking place in a century where people only met and fell in love with those in their neighborhood. All of this whimsy seems to be part of Leon’s goal, especially as he wraps them tighter and tighter together using an admirably constructed tone, but it’s just not that interesting of a goal. It is cute, though. 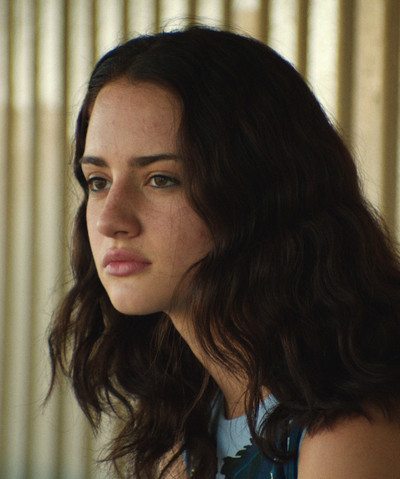