Even if it were not for its parallels with the recent Oklahoma City bombing, "Top Dog" presents serious problems. Why, exactly, would you want to make a movie about racist hate groups, and then disguise it as family entertainment about a cute dog? The movie stars Chuck Norris as a San Diego cop who becomes partners with the dog, named Reno, after it sees its previous master killed by racists.

"Top Dog" is so familiar with cop movie clichés that as the movie opens Norris is already under suspension from the force - eliminating the need for the obligatory scene where the chief asks for his gun and his badge. This time, the chief wants him back, because neo-Nazis have blown up a building with children inside, in an opening sequence with chilling reminders of Oklahoma City.

That Reno is some dog. In that bombing sequence, it goes into a burning building and brings out a baby, neatly wrapped in a blanket. Later, it sniffs out bomb materials. But its neatest trick is sniffing out an album with the photos and addresses of several synagogues the bad guys plan to bomb. Maybe it doesn't use the sense of smell. Maybe it has X-ray vision. Norris takes Reno to visit his mom (Jerta Ware), who in another of the movie's chilling parallels, tells her son the neo-Nazis "will probably attack tomorrow." Why, mom? "Because it's Hitler's birthday - April 20." Mom is right. We see the racists planning their attack, inside an Abandoned Warehouse, which of course is the venue of choice for such summits. They sit around a table furnished with a dozen of those green-shaded "banker's desk lamps" that are always on sale for $29.95 in the DAK catalog.

The movie, which is mercifully brief, arrives quickly at its climactic scene, as the racist conspirators plot violence at an ecumenical "Racial Unity" ceremony. In a plot development that will have kids whispering awkward questions, three religious leaders - a priest, a rabbi and a Hindu holy man - are trapped inside a limousine that is wired with a bomb.

Norris has to crawl under the car, find the bomb (helpfully equipped with a beeping digital time readout), and defuse it by pulling the red - or is it the blue? - wire. (The police chief is not too prudent, in my opinion, in leaning against the side of the limo during this operation, instead of taking shelter several blocks away.) I can't blame "Top Dog" for the unfortunate juxtaposition with Oklahoma City; this movie was made months ago. But what I don't find amusing is the way it employs a plot that is very specifically about racist hate groups, and then adds a cute shaggy mutt to make itself look like a family picture. Although the PG-13 rating makes no mention of the subplot about racism, I wouldn't want to be a parent explaining why the bad guys wanted to blow up those people. 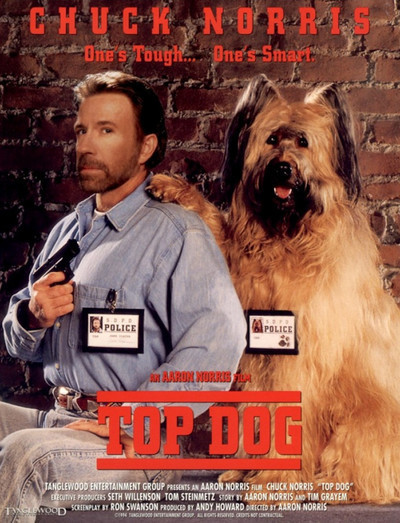