We’ve reached the third and final chapter of the feel-good “To All the Boys I Loved Before” series. In the first movie, Lara Jean Song Covey (Lana Condor) suffers the embarrassing ordeal of having her old love letters sent to crushes. One of the receivers, Peter Kavinsky (Noah Centineo), hatches a plan to be in a fake relationship with Lara Jean to make his ex jealous. The experience ends up bringing them into a real relationship. Then, in “To All the Boys P.S. I Still Love You,” Lara Jean navigates the foibles and insecurities of first love while exploring old feelings for another of the boys she loved before, John Ambrose (Jordan Fisher). Now, slightly more confident and eyeing a future filled with romance, college and writing success, Lara Jean starts “To All the Boys: Always and Forever” on a hopeful note. Her dreams never seemed closer, but she’s about to learn one of life’s tougher lessons: the future doesn’t always go according to plan.

The series picks up during the Covey family’s trip to Seoul, South Korea. It’s a chance for the three sisters—Lara Jean, Margot (Janel Parrish) and Kitty (Anna Cathcart)—to spend time together and get in touch with their mother’s culture. During the trip, their dad (John Corbett) asks his daughters for their blessing as he’s thinking about proposing to Trina (Sarayu Blue), and they happily agree. The horizon is filled with possibilities, including Lara Jean’s hopes to follow Peter to Stanford. But possibilities are not certainties. When her first dream school changes her plans, Lara Jean is forced to figure out not only what she wants out of her relationship with Peter, but also what she wants for herself and her own college experience.

The playful “will they or won’t they” dynamic has kept the series moving since Lara Jean first learned that Peter received her love letter. Even if it seems like it's wearing a bit thin by the events in “Always and Forever,” the affectionate energy between stars Condor and Centineo keeps the sparks flying. Centineo is somewhat sidelined with his own storyline when his distant father reenters the picture. This gives Condor’s character the space she needs to figure out things for herself. Condor moves through her character’s insecurities, hopes, and fears quickly as an anxious mind might, still sometimes visualizing her boyfriend in the room with her talking through things even as she’s agonizing over her next text message. Even after all this time, Lara Jean still struggles with telling Peter the truth, a regular feature of romantic comedies, but the story is able to sell it and keep the romantic tension intact without turning too serious or silly.

Director Michael Fimognari’s visual style changes somewhat for the story’s last hurrah. In the second movie, which Fimognari also directed, the narrative is broken up into chapters, the titles of which were incorporated into the story as banners in the hallway of Lara Jean’s school. Now, they’re animated intertitles, slightly chopping up the flow of events a little more than before. But there are also more eye-catching moments, like the opening scene in a Seoul cupcake shop made to look like a hand-drawn setting. But Fimognari’s cinematography continues the series’ bright and sunny aesthetic, which is also reflected in the production design, like the mostly white-and-tan contemporary style Covey home where much of the movie is set. Over the past three movies, Lara Jean’s room has always been a fun departure from the neat and tidy home Dr. Covey keeps, and it continues to factor into her story. It’s colorful with flowers painted on the wall behind her bed, strings of lights sparkle gently in the background, and sweaters strewn over the rug. It’s the space she has to herself, the space where she can stress over what to do or say next and a space she can decide who to share it with.

Based on the charming novel by Jenny Han, screenwriter Katie Lovejoy makes some adjustments from the page for the screen. The most noticeable of which is a less-than subtle inclusion of New York University. On their school’s senior trip to New York City, Lara Jean and her friend Chris (Madeleine Arthur) end up in Washington Square Park, where Lara Jean marvels at the college’s immersion in the city. The story feels like it loses its way and turns into a brief ad for NYU, complete with a scene where Lara Jean goes to a swanky rooftop college party with her friends and falls in love with New York City. It’s supposed to sell the idea that now she’s considering a school far from both her family and Peter, but it feels like it’s selling something else, too.

Fortunately, it’s not too long before Lara Jean and Peter are reunited and the story gets back on track. There’s a lot to figure out in those last months of high school—prom, graduation and where you’ll go and do next. Fimognari rounds out the finale with a fan-friendly nod to the previous movies, a highlight reel of Lara Jean and Peter’s relationship from its first inauspicious beginnings. Because no matter what happens, those good memories are worth revisiting and savoring, “Always and Forever.” 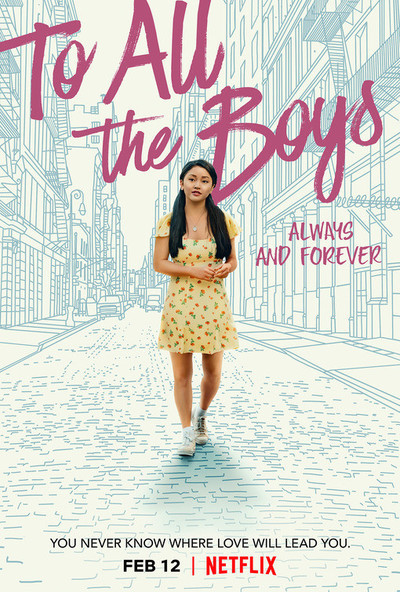 Katie Do as Ani