Tiny Tim: King for a Day

In 2011, Roger Ebert wrote a short piece about the impossible-to-classify performer Tiny Tim, whose peak of fame probably was getting married on "The Tonight Show" in 1969, an event that made headlines around the world, receiving ratings second only to Neil Armstrong's walk on the moon just five months prior. In his piece, Ebert reminisced about seeing Tiny Tim perform in the early 1960s at the Black Pussycat club in Greenwich Village, the club where Tiny Tim (née Herbert Butros Khaury) got his start. Ebert wrote: "In another year, Tiny Tim was famous. I believe no one remembers how famous." If "no one remembered" in 2011, then "no one" really remembers in 2021. "Tiny Tim: King for a Day," a new documentary directed by Johan von Sydow, should rectify the situation.

The documentary makes a valiant (and not entirely successful) stab at contextualizing Tiny Tim, attempting to explain why he rose to such stratospheric heights, moving from the periphery straight into the heart of the mainstream, where he not only sold out Royal Albert Hall, but performed for 600,000 people at the Isle of Wight festival in 1970. How did a guy with a ukulele, a falsetto voice, and a jolly artificial 19th-century-music-hall persona pull that off?

Von Sydow has gathered together a host of interview subjects, from family members to collaborators, to filmmakers like Jonas Mekas and D.A. Pennebaker, all of whom reminisce about the performer's meteoric rise (and equally meteoric fall). The film is peppered with excerpts from Tiny Tim's occasionally tormented journal (voiced sensitively by "Weird Al" Yankovic), where the child of a Russian-Jewish father and a Lebanese-Christian mother—who threw him out of the house as a teenager—worries obsessively about sin, about Jesus, about Satan, and about his goals for himself. His ambition was titanic and visionary: "I will be a star," he declared to his journal. Justin Martell, who wrote the 2016 biography, Eternal Troubadour: The Improbable Life Of Tiny Tim, is the main tour guide of the documentary, walking us through each event: his troubled childhood, his love of Bing Crosby, his start as a street performer, and his novelty-act appeal to the burgeoning coffee club folk-house scene in Greenwich Village.

How did he develop his style? It was a real "act," in the old-fashioned sense of the term. He was a throwback to vaudeville, to the 19th-century English music hall. (Trav SD.., author of No Applause, Just Throw Money: The Book That Made Vaudeville Famous, calls Tiny Tim "the Holy Saint of the neo-vaudeville movement"). Tiny Tim created a persona, and then lived it 24/7: he wore big boxy blazers, wide ties, and would shuffle onstage carrying a small bag in one hand, ukulele under his arm. When he blew kisses to the audience, the blown kisses seem affected, as though he were a bored monarch. Success, when it came, was gratifying to the ego part of him, and yet didn't seem to make a difference in how he felt about life. One journal entry: "I am the biggest star in the country. O blessed Lord. My soul is crying for help." He is referred to as "kind" and "vulnerable," but some of the stories told here—of a sexual phone call with a 14-year-old girl, and his first conversation with his third and final wife (before they met, he asked her bluntly over the phone: "Are you attractive? Are you slim?" and then looked disappointed when they met in person) tells another story, one not really explored.

The rule-shattering era of the late 1960s was essential to his rise—could it have happened at any other time? Tiny Tim is unimaginable without the surrounding world of "Happenings" and flower-children dancing through the streets of Haight-Ashbury. "Tiny Tim: King for a Day" attempts to loop it all together, but footage of soldiers in Vietnam does little to explain why millions fell in love with a childlike man singing "Good Ship Lollipop." He was often treated as a "freak" (in fact, his first regular gig was at what was then called a "freak show" in Times Square): people would come to gawk and laugh. Tiny Tim's sexual ambiguity (his third wife, interviewed for the film, said she thought he was "half-gay") had something to do with his notoriety, particularly at the start, although the claim made that he was "the first androgynous rock 'n roll star" is debatable to the point of being ridiculous. Whatever the case may be, his eccentricity was cathartic for those drawn to him. John Lennon loved him. Bob Dylan wanted to make a movie with him. D.A. Pennebaker, filmmaker and frequent Dylan collaborator, was involved in the project. Nothing came of it, but the interest speaks volumes.

It's not surprising that the best footage in the documentary comes from avant-garde filmmaker Jonas Mekas, who died in 2019 (he was interviewed for the documentary before he passed). Captivated by this unique figure ("that voice is not from here," he said), Mekas filmed him in his early folk-coffee-house days, and the black-and-white footage is dreamy and expressionistic, Mekas' camera drifting down to the ukulele and back up, Tiny Tim's face gleaming out of a velvety black background, looking beautiful and decadent in a Pre-Raphaelite way. More than anything else, Mekas' footage gives a glimpse of the fascinating aura that Tiny Tim projected.

Tiny Tim's fame limped along in the '80s and '90s, after he tried to adapt to the disco era, the punk rock era (poor Johnny Carson looks completely confused watching Tiny Tim writhe on the floor, ripping off his T-shirt). Howard Stern used to have him on his radio show all the time in the '90s. In one conversation, Tiny Tim chastised Stern sternly (so to speak) for using "Jesus Christ" as an epithet. (You can watch that clip, and others, on YouTube.) Tiny Tim died in 1996, after collapsing on stage in the middle of a show. A pure vaudeville-era death.

Bob Dylan said of Tiny Tim, "A lot of people just think that he was a joke. But I’ll tell ya, no one knew more about old music than Tiny Tim did. He studied it and he lived it. He knew all the songs that only existed as sheet music. When he passed away, we lost a national treasure."

"Tiny Tim: King for a Day" doesn't quite make that case. 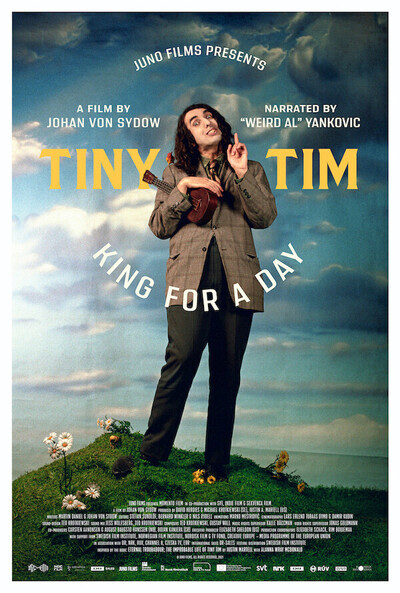 Tiny Tim as Himself (Archival Footage)

Jonas Mekas as Himself

D. A. Pennebaker as Himself

Wavy Gravy as Himself

Justin A. Martell as Self