Tigers Are Not Afraid

It’s not surprising that Guillermo del Toro has been a vocal advocate for Issa López’s “Tigers Are Not Afraid.” The film was clearly deeply influenced by Del Toro’s “The Devil’s Backbone” and “Pan’s Labyrinth,” which merge fantasy and supernatural elements with real-life horrors. In those films, and López’s, the real monsters are flesh and blood. They carry guns and victimize the innocent. At its best, López’s movie has that del Toro signature style, and she also proves herself a deft director of children, another element she shares in common with the Oscar winner. There are moments in the midsection of “Tigers” in which I wished the film had more urgency and rising tension, but then the film lands with a breathtaking final shot. I mean that literally—I gasped. And it’s a shot that will linger with me, a perfect closing beat for a film that has become one of the most-buzzed of 2019 for a reason.

One important element that separates “Tigers” from a masterpiece like “Backbone” is that López’s film is not a period piece. For a lot of viewers, it will feel like something they can’t relate to, but it tells a very current story, especially given how much the drug war on the border of Mexico and the state of immigration dominates our political discourse. López opens by reminding us how many people have been murdered and disappeared in Mexico since 2006, when the drug war intensified and riddled the air with violence to such a degree that there are entire cities that have become ghost towns.

Our story is set in one of these cities, where children have been orphaned by the violence that surrounds them, forming a sort of “lost boys” group of their own on a rooftop. They steal food and the supplies to keep them alive, and they’re led by an angry young man named Shine (Juan Ramon López). In an early scene, Shine steals a phone and a gun from a local thug named Caco (Ianis Guerrero), and nearly shoots him in the back. Not long after this decision, a quiet girl named Estrella (the incredible Paola Lara, whose commitment holds the whole film together) comes home after a school shooting to find her mother is missing. She joins Shine’s gang, and they tell Estrella that her mother was likely kidnapped and either trafficked or murdered. And then Caco and his men come looking for his phone.

You may be wondering how fantasy plays into such a dark, realist narrative. López opens with a teacher asking her students to write a fairy tale, and some of the elements of that instruction weave their way through the film. There’s a mysterious blood trail that follows Estella; she is haunted by something in the shadows that may or may not be her mother; she’s even been granted three wishes, which will play major roles in how her story unfolds. While some filmmakers would have used the magical elements of Estella’s life to provide an escape from reality, López is more interested in using them to enhance the danger and symbolism of her story. Don’t come into this wanting answers about what’s real and what isn’t—you won’t find them. López merges the horrors of real life with fairy tale structures and storytelling in a way that’s ambitious and consistently fascinating.

The union of the two doesn’t always click, though. To be blunt, what del Toro does is very difficult to maintain tonally, and “Tigers” doesn’t quite come together like his best work. There’s a sense of mounting danger in the best films like this that is just a bit lacking in “Tigers.” I wanted to feel the monsters closing in on Estrella and Shine more than I did, as the film kind of plays on one level, even as López proves she’s willing to take some risks in terms of presenting the real danger of this world. Still, when a film opens with a school shooting and a child pointing a gun, it’s hard to build from there in terms of danger and urgency. Consequently, “Tigers Are Not Afraid” is more a film that I appreciated instead of becoming enveloped in its world and fully invested in the plight of its characters.

That is until that final shot. Without spoiling anything, López uses color and space in a way she doesn’t otherwise in the film, and the result casts everything before it in a poignant light. These ghost towns of orphans are so violent and tragic that perhaps the only way we can even possibly understand and relate to what’s happening there is through a fairy tale. “Tigers Are Not Afraid” may be imperfect, but you can feel the passion and creativity of its filmmaker in every decision. She’s fearless. 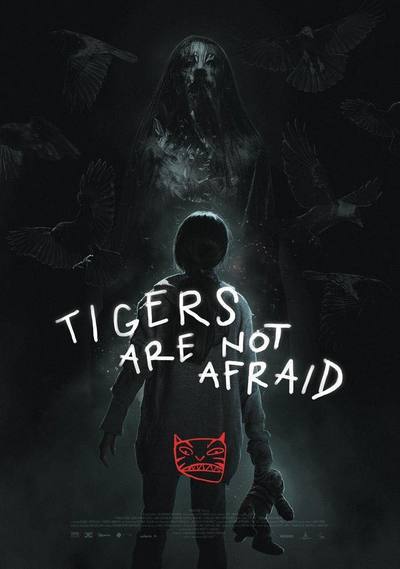