“I’ve made a career out of looking at the weird and bizarre part of life,” New Zealand-based television journalist David Farrier says at the beginning of this documentary, whose title doesn’t even begin to hint at the depths of peculiarity this particular story ends up digging into. From the samples of Farrier’s work the movie shows, the appealing reporter is a younger, hipper variant on CNN’s Jeanne Moos, a collector of novelty human-interest stories. As most collectors of novelty human-interest stories do, Farrier has a healthy relationship to the Internet, and as he tells it, he was intrigued, while surfing it of an evening, to come upon what were billed as “Competitive Tickling” videos.

At this point in the movie there’s a clip in which two adolescent boys, dressed in high-school wrestler’s gear, hold down a third fellow and, yep, tickle him. The subject or victim, as you will, has the customary reaction to being held down and tickled: he laughs and squirms. It’s difficult to see where the “competitive” side of it happens. To a non-fetishist, the whole thing looks rather pointless, among other things, but hey, the enlightened viewer can also shrug “nothing human is alien to me” and live and let live and all that. Farrier figures the purveyors of this oddball material won’t mind some exposure. But when he gets in touch with the firm that professes to represent the makers of the video, he receives, in response, a rude e-mail saying that the firm does not want to associate with a homosexual journalist. (Farrier is gay, and out.) A request for clarification is met with a response containing a homophobic slur. This piques Farrier’s curiosity, but he doesn’t really have a good idea of just what kind of bear, so to speak, he’s poking. Soon he and his producing partner are threatened with what would be, if tried, a very expensive lawsuit. Remember, nothing up to this point has gone any further than “I’d like to do a story on you.” Then, more weirdness. A couple of “representatives” of the company fly out to New Zealand, first class, with the idea of ironing things out with Farrier. These odd, camera-shy folks don’t have much to say on arrival except “stop.” Why it was necessary for them to fly around the world to deliver the message in person seems as much a mystery to them as it is to Farrier.

Farrier and his television segment-producing partner Dylan Reeve—the two are also the co-directors of this movie—then fly to the United States, where the videos are produced. They’re in the most interesting position a journalist can find him or herself in—determined to get to the bottom of the story, without having too much of an idea what the story really is. Tracking down a shooting site in Los Angeles, they surprise one of the fellows who had been out to visit them in New Zealand. They then trek to a town on the other side of the country from where a lot of teen boys were recruited for tickling videos. Eventually they figure out what the viewer likely already inferred: “competetive tickling” does not exist, and the videos are non-pornographic fetish tapes made by parties who get very, very agitated at any suggestions that they are fetish tapes. A couple of participants in the videos tell harrowing tales of blackmail and exploitation, while makers of cheerfully out tickling fetish videos share their craft and tell disturbing tales of a mysterious outlier producing similar material who’s making life difficult for everyone doing it on the up-and-up. (Not that there are so many of those: as fetishes go, tickling really is pretty specialized.)

The web that Farrier and Reeve discover is shown to be more and more elaborate, and the story eventually becomes one of corruption, shame, closeting, and more. Farrier and Reeve discover the identity of their lawsuit-threatening tormentor, and manage to turn the tables on this individual, at least somewhat, but “Tickled” doesn’t build to a cheerleading climax. Instead, what occurs is like a sadder version of the drawing-back-of-the-curtain in “The Wizard of Oz.” A revelation more pathetic than awe-inspiring.

The moviemakers craft a satisfying narrative while leaving the viewer with some questions; this is a movie that manages to be disquieting and entertaining simultaneously. You will believe, unfortunately, that a man can build something that can be called “a tickling empire.” 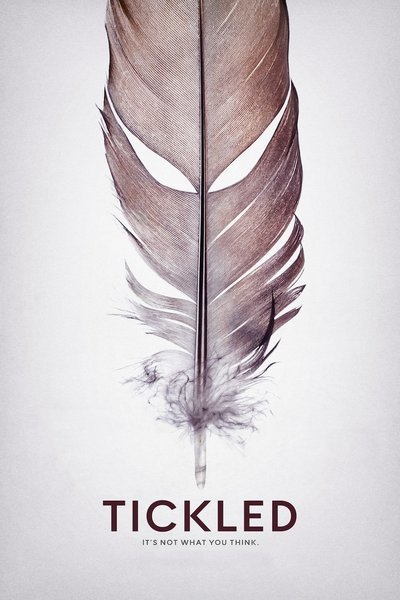