A short story's worth of material stretched out to feature length, but heartfelt and thoughtful enough that it holds one's attention regardless, "Three Peaks" is about a makeshift family (consisting of a divorced mother, her young son, and her boyfriend) that goes on vacation in a remote cabin, where they face the unchangeable realities of their lives. Writer-director Jan Zabeil's second feature continues the vein of his debut, 2011's "The River Used to Be a Man," combining wilderness panoramas with quiet, often internalized characters struggling with problems that they can identify and discuss but never resolve.

The main conundrum is that the mother, the French Lea (Bérénice Bejo), has been with her German architect boyfriend Aaron (Alexander Fehling) for two years, and he has an excellent relationship with her son Tristan (Arian Montgomery). But the boy's (unseen) biological father is still in the picture, and apparently has such a strong and healthy relationship with his son that Aaron may never feel as if he's the primary father figure.

This is a familiar dynamic in families where one or both parents are divorced and have children from previous relationships. The mentally and emotionally healthy ones figure out how to work through it, but it's hard. We sense from the earliest scenes that this trio is feeling a lot of anxiety over their predicament. Being away from the rest of the world momentarily validates the fantasy that their little family unit is all that matters. But reality intrudes courtesy of a call from the boy's father (on a cell phone that he gave to Tristan without Lea or Aaron's knowledge), setting the film's deeper discomforts into motion. The boy speaks English to his father, a language that Lea didn't know he knew.

The most sharply observed moments in the movie show Aaron and Tristan simply relating to each other, with or without Lea, and Aaron and Lea discussing Aaron's relationship with the boy, whom he dotes on, taking him on hikes, teaching him to play a vintage organ in the cabin, and reciting bedtime stories to him. Tristan even slips and calls him "Papa" once. An unsettling undercurrent runs throughout their moments of bonding, and the attentive viewer (or the fan of morose-philosophical European art cinema) will sense that sooner or later, things are going to take a turn for the weird or the worse.

Unfortunately, "Three Peaks" is so thinly conceived and executed that, for the most part, it fails to justify its existence as a stand-alone feature. The principal actors are low-key likable and never make a wrong move, yet at the same time, they either aren't charismatic enough to carry a brief but emotionally freighted story filled with long pauses and eerie silences, or else the film has been constructed in such a way as to make it tough to really connect.

On the filmmaking end, Zabeil has constructed the story around patterns and groupings of three, starting with the main characters and stretching to include three languages (German, French and English), three pools of water, and, yes, three mountain peaks (noted in the dialogue). Axel Schneppat's cinematography situates the characters within an environment loaded with ready-made symbols, sometimes photographing the Dolomite mountain range in a manner that evokes 19th century European landscape painters, but other times letting the performers fade into washed-out or blown-out compositions (a touch that is probably intentional, given how the dialogue teases out ideas of the ephemeral nature of existence and relationships).

A lot of this unfortunately feels like reassurance that we're glimpsing an outline of a range of solid artistic and philosophical notions that will reveal themselves upon repeat viewings. But one can't help wondering if it's the filmmaking equivalent of a professional illusionist using a fog machine onstage. 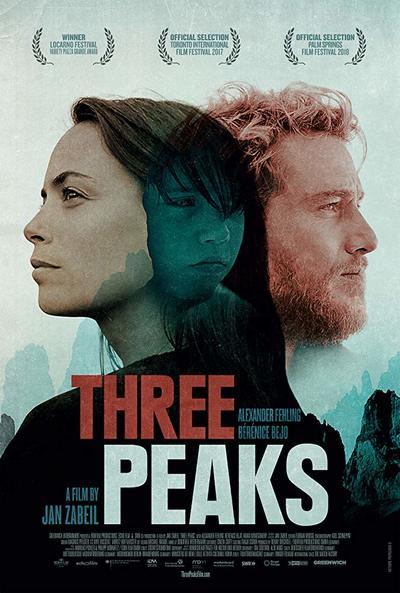