This Is Everything: Gigi Gorgeous

They stare directly at you and invite you to be a part of their conversation. They reveal intimate details about their lives in order to normalize what certain parts of society still consider taboo. They tell us that we needn’t be anything other than ourselves, and how can we resist liking them for that? That is the power a person has when they post a video on YouTube. The bond that viewers forge with an Internet celebrity is stronger than has ever been achieved in any other medium. For people who have trouble relating to others, watching these video confessionals can serve as a half-step toward human connection. We’ve already entered the age of Fahrenheit 451, where “friends” primarily exist on screens that take up the majority of our attention. Yet the best YouTubers are the ones who encourage their viewers to turn their attention inward and engage with the world existing outside of their laptops. When Alexis G. Zall comes out by saying she “likes girls,” or when Brad Jones opens up about surviving a suicide attempt, they aren’t just providing a diversion, they are changing lives through the empowerment of truth.

“This Is Everything: Gigi Gorgeous,” the latest work from master documentarian Barbara Kopple (available on YouTube Red starting February 8th), focuses on the truth of one particular YouTuber whose sense of self is only strengthened online. Born Gregory Lazzarato in 1994, he excelled at diving throughout his childhood, winning a national championship at age 15. Yet in home video footage of the young boy, his face has the sort of uneasy expression any viewer of TLC’s “I Am Jazz” will immediately recognize. There’s no question he feels uncomfortable in his skin, and is much more interested in filming makeup tutorials than he is with stereotypical male activities. The videos he posts as “Gregory Gorgeous” gain a greater following once he identifies himself as gay, and at 100,000 subscribers, his channel attracts the attention of manager Scott Fisher, who understands the profitability of vloggers. Fisher explains to Kopple how sites like YouTube have enabled talent to maintain unprecedented control over their content, while earning the lion’s share of the revenue, something that could’ve never happened a mere handful of years ago.

In many ways, this film is a fitting follow-up to Kopple’s “Miss Sharon Jones!”, a rousing portrait of the titular soul singer who passed away last year. Just as Jones triumphantly forged ahead in her life and career in the aftermath of her cancer diagnosis, earning a Grammy nomination in the process, Gregory comes to a pivotal realization after his loving mother succumbs to cancer in 2012. Faced with the fragility of life and the limited time afforded to each of us on Earth, the young man decides to finally act on his inner-most desire, and that is to live the rest of his life as a woman. The “he” of her past is officially no more. Though her brothers are entirely in support of her transition, the news is more difficult for her father, David, to accept. In an emotional interview with Kopple, he affirms that it is a father’s duty to love his children even if he doesn’t understand them. Renaming herself as Gigi Lazzarato, she smuggles her camera into a visit with her dad, where she tells him of her plans to undergo facial feminization surgery, a procedure that will cost $14,000. When he asks her if she has that kind of money, Gigi informs him that she’s already paid for it. Though David still occasionally uses male pronouns while addressing Gigi, there is no doubt in his mind that his child knows exactly what she wants. He accompanies her to appointments with the physician, and later with the Beverly Hills doctor that will give her breast implants. In a lingering shot, the camera regards from a wide angle the tender image of David gently tucking his daughter into bed in their hotel room as she recovers from her latest surgery.

It is in observant, delicately nuanced moments like these where Kopple’s genius shines the brightest. She has crafted so many unforgettable films about inspirational life forces, from the courageous wives of coal miners in “Harlan County, U.S.A.” to the politically outspoken Dixie Chicks in “Shut Up & Sing,” and this is one of her best. Gigi’s exuberant presence makes the picture a complete joy from beginning to end, as Kopple seamlessly weaves her own documentation of her subject’s journey with footage from Gigi’s videos, where she guides viewers along every step of her external transformation. There’s an especially intriguing video that depicts Gigi having a conversation with her male persona, and her macho posturing comes off as all the more artificial when directly contrasted with her feminine self. Fisher notes that whereas Gregory yearned to stand out from the crowd, Gigi’s goal is to blend in, finding acceptance from others on her own terms. Yet aside from the testosterone blockers and estrogen, Gigi believes that the transition undergone by a transgender person is more mental than anything else, and doesn’t necessarily require a change of genitalia. As Gigi sits in a car, calm and confident in her body, Kopple brilliantly juxtaposes her footage with the voice of Gregory, encouraging his viewers to be themselves. This one scene conveys the unchanging nature of identity regardless of one’s physical state with more clarity and impact than the entirety of “Cloud Atlas.” Though the film culminates with Gigi’s participation in New York Fashion Week, where she struts the runway looking like Lady Liberty, an even more satisfying highpoint occurs at David’s wedding to his second wife. It’s the first time much of Gigi’s extended family has seen her post-operation, and when she walks down the aisle, her elation radiates through the screen.

One of the questions raised by Kopple’s film is whether Gigi will choose to take the advice of her new manager and alter her image in order to attract more sponsors. I doubt it. While actors in Hollywood often have to compromise their own identities in order to be more commercially viable, YouTubers like Gigi make a fortune by being true to themselves. She embodies the wisdom of a young generation infinitely more accepting of gender fluidity than their predecessors. There’s a chilling resonance to the moment where Gigi reflects on the legacy of German physician Magnus Hirschfeld, and the Nazis that attempted to silence his groundbreaking advocacy for gay and transgender rights. If current events have proven anything, it’s that the threat of such intolerance remains frighteningly real. Yet sometimes, all one has to do is look a person in the eye in order to change their heart. That is how a revolution begins. 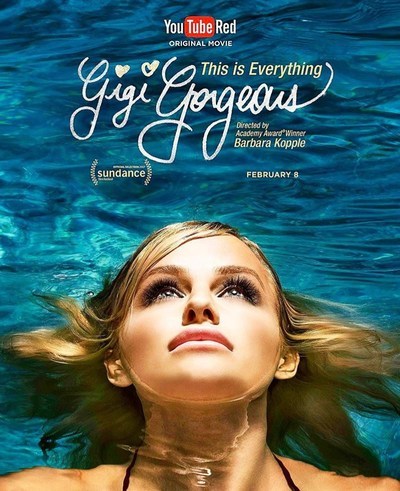 This Is Everything: Gigi Gorgeous (2017)

Gigi Lazzarato as Herself