Bella Brown ("Downton Abbey'"s Jessica Brown Findlay), the central character of writer/director Simon Aboud's "This Beautiful Fantastic," began life as a foundling, left in a box by a river as a baby, hovered over by protective ducks. Raised by nuns, Bella grows up to be a librarian, who harbors dreams of writing a children's book. She also has what appears to be OCD tendencies, but it's twee-movie OCD, an adorable character quirk more than anything else. She's a neat-nik. She is picky about what she eats. Her kitchen cabinets are organized with "Sleeping With the Enemy" precision. However, her organizational skills fail her in a couple of areas. She is constantly late to her job at the library, and she has also let the garden behind her rented house fall to ruin. In another movie, this all would seem stressful and dark, but "This Beautiful Fantastic" is not meant to be realistic. It's supposed to be a fairy tale. That's fine, but it's a very low-stakes fairy tale, wrapped in a strained garden metaphor.

"This Beautiful Fantastic" has a very small cast, and each male character circles around Bella, wanting only to help her, be near her. Some of these men appear to have nothing else to do in their lives but look out for her, get her out of scrapes, teach her how to live, blossom, grow. The film takes place in a somewhat period-less atmosphere, so it's unclear why she dresses like she's a suffragette in 1912, or a governess in the Edwardian era. Just another one of Bella's quirks, I guess. Her next-door neighbor Alfie (Tom Wilkinson) is an ogre, a semi-terrifying Scrooge, growling at her from over the fence. He's the one who calls the authorities to report the jungle of weeds that is her backyard. Bella is given a month to turn that jungle into a proper garden or she will be thrown out into the streets.

Alfie's personal cook, a charming Irishman named Vernon (Andrew Scott), jumps ship from the mean old man to cook for Bella, even though she has no money to pay him. He's a father of two. Why would he give up a paying job for a non-paying one? You're not supposed to ask questions like this, but they were unavoidable. Vernon wanders around, carrying serving trays of food, giving Bella pep talks. He commandeers her kitchen. (Bella is constantly being over-ridden by everyone she meets, told what to do, where to go, who to be. She doesn't appear to mind.) At the library, Bella is drawn to a patron, a befuddled and adorable inventor named Billy (Jeremy Irvine). They bond over books, he shows her a mechanical bird he created. Bella says of him later, "He invents mechanical animals and he makes me feel like I can fly."

This kind of thing was done more effectively in "Amelie" (the film's clearest influence), or "Eternal Sunshine of the Spotless Mind," another love story taking place in a timeless technology-less universe. The adorable heroine who inspires everyone she meets to do better, be better, who inspires a feeling of love and protectiveness in even crotchety old men, is as old as the hills (although usually it's a child—like Anne Shirley, or Shirley Temple—who melts the hearts of entire communities, not a grown woman.) Bella, except for her attention-getting outfits, doesn't register as that kind of character at all. Yes, she piles her peas into the corner of her plate, she needs a lot of help to do everything (garden, cook, get to work on time), she checks the lock 20 times before she leaves the house, but that doesn't make her seem remotely like a real person. (It's also hard to picture her writing anything that would be of interest to anyone.) The threatened eviction is an obvious device used to heighten the time crunch, and the garden metaphor wears out its welcome almost immediately.

Fairy tales don't need to be realistic. There is charm and humor in all of the performances. But if you keep thinking, as I did, "Wait, doesn't Vernon have two daughters he needs to support? How is he making a living?" or "Can't she just hire a gardener for two days to hack the weeds away?" or "Why is everyone in this film devoting their whole lives to making Bella blossom like those seeds she plants?" then clearly something is not working. 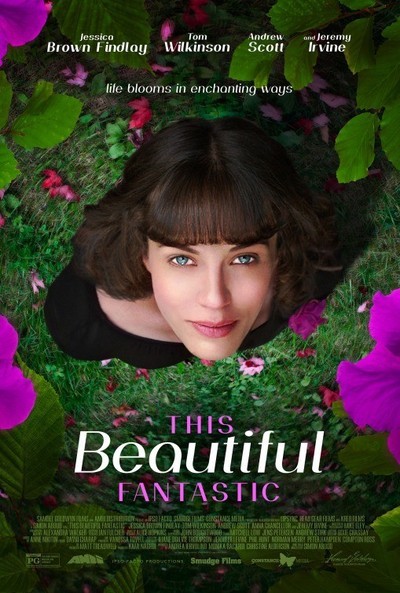