Nathan Silver’s romantic drama “Thirst Street” follows a flight attendant’s spiraling amour fou towards a Parisian bartender, but while that’s an appropriate description of the film’s premise, it doesn’t quite capture what makes it interesting. It’s a portrait of obsession that doesn’t caricaturize nor ridicule, an empathetic account of desire and its inherent limitations, as well as an opaque psychological study that falls in line with life’s myriad mysteries. “No great happiness comes without great pain,” intones the narrator (Anjelica Huston), wryly but with warmth. It’s the film’s modus operandi, but Silver, and his co-writer C. Mason Wells, never shirk the platitude’s nasty, dangerous implications, especially with relation to the characters’ competing passions, and yet they somehow accomplish this with affection.

After the death of her lover, the grief-stricken Gina (Lindsay Burdge) hooks up with the charismatic bartender Jerome (Damien Bonnard) on a layover in Paris. Though Jerome clearly adopts a politely detached view towards Gina, she independently decides that she needs to be in Jerome’s life. Jerome’s early attempts to let Gina down easily predictably fail, and soon she quits her job, moves into an apartment around the corner from Jerome’s (without his knowledge, of course), and begins working at his club. It’s obvious from the beginning that Gina’s fascination will eventually curdle into mania, but Silver and Wells’ gentle-yet-firm approach to Gina’s predicament, along with the reactions of those in her orbit, separate “Thirst Street” from the historical sexism of the “woman stalks man” subgenre. Formally and narratively, the film never takes delusion or its targets lightly, and always conveys the understanding that such psychological states derive from the darkest, most vulnerable places.

While that sense of compassion lies in “Thirst Street’s” script and direction, it’s best evoked in Burdge’s and Bonnard’s performances. Burdge imbues Gina with sympathy and kindness, capturing the personality of a fundamentally nice person who doesn’t understand boundaries or other people’s feelings; her character’s inability to read a room will ultimately be her downfall, but Burdge renders that end inevitably tragic. Meanwhile, Bonnard wonderfully plays her foil, someone who tries to navigate his admirer’s mood, keeping his distance but also being as amiable as possible. Their crackling sexual chemistry and awkward personal interactions make for a compelling on-screen romance, and the way that it devolves when Jerome’s ex-girlfriend Clemence (Esther Garrel) comes into the picture charges almost every scene.

It’s somewhat of a critical cliché to describe a cinematographer as a co-director, but Sean Price Williams’ hazy, luminous photography in “Thirst Street” so strongly defines its aesthetic that it all but elevates him to co-author status. The sensuous, vibrant colors and the intimate framing provide a classically “romantic” sheen that stands in sharp contrast to the more insidious on-screen events. Moreover, it augments Gina’s internal desire to have a grand romance, one worthy of old musicals, but still grounds her actions in an uncomfortable reality. Along those lines, Paul Grimstad’s nervy score also establishes the film’s tricky tone, neatly capturing the lustful urgency that underscores the film without overwhelming its action.

If “Thirst Street” has any major flaw, it’s that the predictability of the film’s narrative pales in comparison to its stirring aesthetics. At a brisk 80 minutes, “Thirst Street” never overstays its welcome, but by the last 15 or so, the film makes most of the requisite genre moves and it falls into a semi-monotonous state. The film’s surprises lie mostly in its characterizations and visual strategy, which carry it far, and yet it doesn’t sustain its initial energy by its end. You can argue that that’s precisely the point, that the fixed nature of Gina’s journey engenders the film’s spiky dread and overt tragedy, but when we finally get there, it falls a little too flat to be completely ignored.

But there’s something special about Silver’s film that often resides in its margins. Its self-contained world feels inhabited yet enigmatic, especially the once glamorous, now seedy cabaret club where Jerome works, run by the sleazily forthright Franz (Jacques Nolot). There’s the potent thread of over-symbolizing one’s life, reading too much into strangers’ clairvoyance and random signals from the universe (Gina sees a sign that reads “A Louer” outside of an apartment; though it means “For Rent,” “Louer” also invites the misreading of “Lover”). The lost-in-translation comedy, while trite or tired in the wrong hands, excels here mostly because Gina never once feels self-conscious about flubbing her way through conversations. But “Thirst Street” succeeds on the basis of Silver and Wells’ treatment of desperation, the frayed assuredness that surfaces when one realizes that there’s nothing left to lose. It’s a hard thing for a film to convey without over-psychologizing its subjects, but “Thirst Street” fittingly captures this in snapshots and glimpses. The result is a slow-motion car crash that you intimately experience from both in and outside the car. There’s just enough distance to allow for wisdom but not enough so as not to feel the impact. 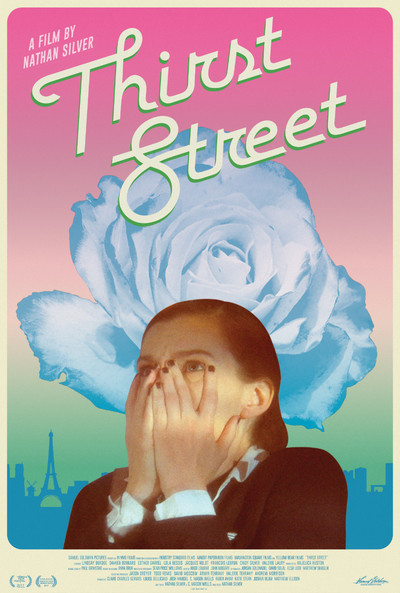