“They Remain” is such a slow burn of a film that it fizzles out. It’s one of those movies that mistakes meandering as building tension, and wastes an intriguing presence on weak characters and an overbearing sense that it’s being made up as it goes along. It’s about people going into the woods and possibly going insane, and it feels like it may have been made by people who went into the woods and possibly went insane—although that is liable to make it sound more fun than it actually is. "They Remain" looks gorgeous enough to never completely collapse, but it slips through your fingers every time you try to get a hold of it.

Directed by Phillip Gelatt and based on Laird Barron’s short story -30-, “They Remain” is primarily a two-hander, featuring a pair of scientists on the edge of a mysterious woods in which something horrible happened. A cult took up residence in these woods not long ago, and they were a thrill kill cult, the kind that lured victims to the lush greenery only to slice and dice them as a part of their rituals. An indefinite amount of time later—recent enough to be scared that there may be leftover cultists in the woods but long after the story is off the front page—a corporation sends a pair of scientists to the location to investigate. What could scientists possibly investigate at the site of horrible murders, you ask? In itself, this question is the most interesting aspect of “They Remain.” Was the sociopathic behavior influenced by these woods, possibly in a biological, definable way? Or could the sociopathic behavior have left an imprint on the evolution of nature here in a way that can be quantified?

The pair sent to find out answers to these questions are Keith (William Jackson Harper, Chidi on “The Good Place”) and Jessica (Rebecca Henderson). Filling somewhat interesting gender roles, Keith is more of the hunter, the one who goes out to investigate the woods—place cameras, gather samples, look nervously at the trees—while Jessica stays at the camp watching the cameras and testing the samples. Neither seems to find much of anything, and perhaps that's part of the reason they start to go crazy. Or do they? She says she hears knocks on the door at night but there’s nothing on the security footage. He has terrifying dreams. She hears whispers. And so on and so on.

One would know that “They Remain” is based on a short story even if it wasn’t in the credits. It feels too thin for a full feature. It takes a half hour of checking camera settings before "They Remain" really gets going at all, even if the eventual journey is a pretty one. When it does get intense, Gelatt resorts to too many hallucinatory devices and dream sequences to keep us engaged, and the flashes of naked cult members murdering people are woefully misguided. They break the already tenuous rhythm of the piece. Worst of all, Keith and Jessica are bafflingly inconsistent. They get mad when they hear about a CSI team that was there just before them but then brush off the news that the team might have gone crazy and killed each other as if it’s nothing. Logical questions aren’t asked or answered by these two, and so they become devices. It’s a shame because Harper, SO great on “The Good Place” (and in “Paterson”) is wasted here. He’s a great actor but even the greats can’t sell lines like “The world is large and unknowable. No one ever really knows anything.” I know this isn’t a very good movie. 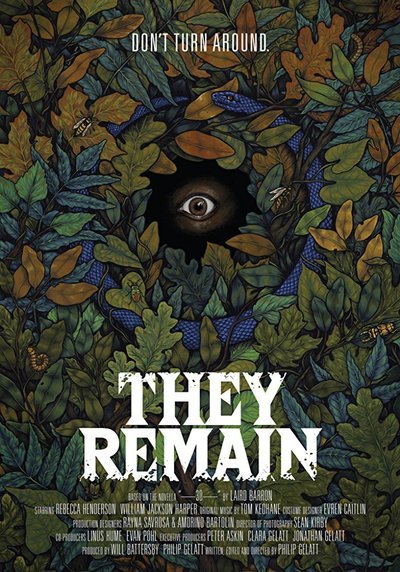