The Yes Men Are Revolting

Andy Bichlbaum and Mike Bonanno are the leaders of the Yes Men, a satirical leftist activist group that gets their message across by putting words in their target’s mouths. When corporations (and/or nations run by corporations) need their evildoing embarrassed, Bichlbaum & Bonanno, along with help from their team, pretend to represent the satirized in front of the press. Armed with cheap suits and pseudonyms the Coen brothers would wish they had thought of (Erastus Hamm, Kinnithrung Sprat, Granwyth Hulatberi), guerilla goofballs Mike & Andy become fake reps at conferences, where they announce grandiose initiatives that are too good, or ridiculous, to be true. The news reports it, and once the hoax is revealed, the Yes Men can soap box about the underlying frustration within their prank, while the targets begin damage control. It’s a little Michael Moore politics dressed up with Sacha Baron Cohen’s showmanship. Aside from the various news segments they've starred in, their shenanigans have now been collected in three documentary films, creating the rare franchise that improves with each installment.

"The Yes Men Are Revolting" (co-directed by Bichlbaum, Bonanno, and Laura Nix) prevails by justifying the duo’s charismatic relationship with a bromantic arc, offering a resonant understanding of these culture jamming junkies. Instead of being dorky Gen-X heroes (as in 2003's "The Yes Men") or self-designated cartoon characters ("The Yes Men Fix the World" from 2009), they're now contextualized with relationships and jobs, as men whose vitalizing friendship is in a love triangle with activism.

In the beginning of "The Yes Men Are Revolting," the two are buddy-buddy in their political pranking, focusing this time on global warming. Bichlbaum announces on behalf of a later-mortified U.S. Chamber of Commerce that they are now going to work against climate change, while Bonanno tries to show his support by arriving in a giant inflatable ball (the "SurvivaBall," for all your natural disaster needs). When Bonanno can't get in, he ventures to the Capitol with other SurvivaBall folk, and hurls himself down the landmark's steps.

After a nonetheless successful stunt later at the COP15 Climate Change Summit in Copenhagen, Bichlbaum & Bonanno are defeated by the lack of change from the conference, the ominous corporations winning again in the struggle within world government for proper resources. They separate, which inadvertently provides the Yes Men saga needed personal reflection time about where they've come from. During these segments, Bonanno focuses on his expanding family, while sharing with us the activism planted in him from his parents. Meanwhile, Bichlbaum breaks up with his boyfriend, reflects upon his own childhood, and begins to work with other members of the Yes Men brigade for a stunt against the Shell company. He pulls off a definitive Yes Men prank—aesthetically persuasive at first and with a grotesque climax—but without Bichlbaum, it's not the same.

A documentary fittingly executive produced by Adam McKay (director of "Step Brothers," "Anchorman"), its third act offers the friendly fuzziness of a Hollywood comedy, but without a narrative simplicity. The film's passion is bigger than Bichlbaum & Bonanno’s friendship, as their activism needs rejuvenation too. Featuring nods to the spirit within Occupy Wall Street and the reform achieved recently by other countries, "The Yes Men Are Revolting" poignantly wraps itself up as an ode to friendship and the teamwork required to create change.

Issues with "The Yes Men Are Revolting" mostly arise from the potential that this documentary's wider scope invites. The Bichlbaum & Bonanno backstories are finally divulged, but now the overall Yes Men community inspires a nagging curiosity, especially as operations prove to be far bigger than these two. And when engaging this comedic documentary as entertainment, don't just come for the shenanigans, as they aren't the sweet-spot. Their hoaxes can run flat with simply dressed-up madness, making a point that's more rewarding with footage of news channels believing it more than any significant comedic experience. Bichlbaum & Bonanno are naturally funny guys, which is great for character-building. But while they are activists before filmmakers, they are not established entertainers first. Maybe the sequel to this film will involve another test of their friendship when a comedy writer is added to the mix?

Formerly a producer on "The Yes Men Fix the World," co-director Nix is a crucial promotion to their filmmaking team. As Bichlbaum & Bonanno become primarily subjects once again (after co-directing "The Yes Men Fix the World" themselves), some great scenes involve an outsider's look into their friendship, such as the intimate denouement in Bichlbaum’s apartment that officially reunites them emotionally as they sit in a NYC power outage’s total darkness. It's a multi-layered slice of them that would fit in the same spot within a Duplass-directed indie, as matched with some real-life comedy from earlier, in which the two friends cram into a polar bear costume, and operate it step by step. Who said that a political film can’t be sweet, too? In its grandest triumph, “The Yes Men Are Revolting” is an activist doc inspired by more than just its topical issues. 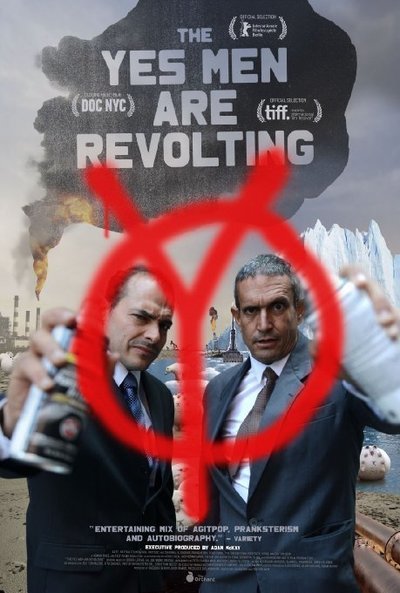