The World is Full of Secrets

One of the greatest scenes that film has given us involves a dramatic letter reading, and can be found in Ingmar Bergman’s “Winter Light.” Once you see it you'll never forget it—an extended monologue by a woman named Marta (Ingrid Thulin), speaking the words that we see existentially tormented priest Thomas (Gunnar Bjornstrand) read. Thulin delivers the pained collection of realizations with the immediacy of any life-shattering conversation, framed in close-up as if she were sitting across from you. The performance becomes more than just a visual choice for the script to show the letter, and in turn her words become more than just text.

“Winter Light” echoes throughout the 15 and then 30-minute one-take monologues in Graham Swon's “The World is Full of Secrets,” which concerns words of horror, but feels like homework. The director foolishly tries to raise the bar of such a cinematic spectacle: now it’s with young actors, and the monologues are winding tales that are always much longer than you expect them to be. These didactic passages make up for half the running time of his debut, and are too revealing of its limited amount of strong ideas.

“The World is Full of Secrets” is about the act of storytelling, the experience watching someone tell you a tale that'll shake you to your core. A group of teenage girls get together for a slumber party, and because the year is 1996, they partake in amusements that are without distractions of screens or social media. To elevate their reality ever so slightly, Swon creates a suitably dreamy atmosphere with a wandering synth score (by Rae Swon); slow fades blend their faces into images of clouds, flowers, or another’s girl’s face. Captured in a boxy aspect ratio, with colors that are rich in a way that only film stock can achieve, the movie starts to cast a bit of a spell. All the while, the foreboding voice of a much older woman (Peggy Steffans) chimes in, prefacing this hangout as an innocent memory before a traumatizing horror took place.

While hanging around outside, the friends challenge themselves to tell the scariest story they’ve ever heard. Emily (Alexa Shae Niziak) talks about a woman who became a martyr for Christianity during Roman times; Suzie (Ayla Guttman) tells of a woman who was beat up by her supposed friends, while her face is framed between a lit candle on each side. Along with an extensive reading of a newspaper clipping about a murdered 15-year-old girl, Swon's film creates a context of violence that awaits these women, without depicting it. But while the script’s subversion of horror that imagines young women as mere body bags is clear, it struggles to make Swon's impulses more interesting.

Many of Swon's scenes are designed to focus on what is being spoken, just as the camera framing makes it so you hear characters in this movie before getting to see their faces. But the filmmaking does not stir up the imagination, so much as fashion an endurance test as an artistic statement: here is this teenager’s face for 30 minutes, their eyes sometimes looking at the camera, sometimes gleaning off the cue cards that are behind it, while telling a story in an unnatural way that could also be much shorter. It's most impressive that the actors can do it in one take. But the meaning behind it is limited, especially as these supposedly gripping tales are conveyed like spirited recitations of a story during English class, instead of being a monologue dispensed with the natural stammers of something recounted on the fly. The artifice in the direction of these performances is intentional, but not meaningful.

“The World is Full of Secrets” concerns text more than anything else—not the visuals within filmmaking or performance, but the stories being told. As an experiment with the sensory experience of film storytelling, it backfires. To best engage Swon's massive amounts of text, you’re better off closing your eyes. 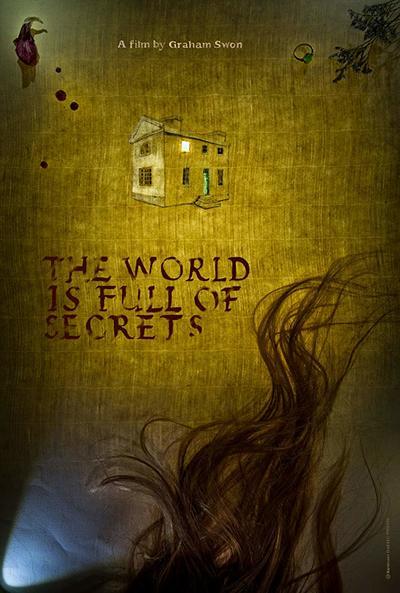