The Woman in Black 2: Angel of Death

Here’s a film that would have benefited from being shot in black and white. For about 2/3rds of its runtime, “The Woman in Black 2” evokes memories of the films of producer Val Lewton. There’s a deliberately slower pace and the unsettling feeling that the titular creature physically haunts every frame. The camera ominously prowls over that which it surveys, and on more than one occasion, we question whether we’ve seen something—or the mere hint of something--in the background. Ominous noises are a fixture on the soundtrack. Any horror depicted is a manifestation of the hero’s psychological issues, brought forth by the stressful situation in which she has found herself.

In color, this is hit or miss. But bathed in silvery cinematography, with a heavy accent on shadow and darkness, “The Woman in Black 2” might have served as an effective tribute to movies like “Curse of the Cat People.” That is, if it hadn’t completely squandered all this goodwill in its last third. As if anticipating the audience’s dissatisfaction with mere atmospheric creepiness, director Tom Harper and screenwriter Jon Croker backload the jump scares and the silliness, cramming way too many “simply for effect” moments in the last half hour. The two biggest jolts are in the commercial, though judging by the audience reaction at my screening, not many people have seen those TV ads.

This is an odd sequel in that its titular character has been reduced to a supporting role. “The Woman in Black 2” focuses on Eve (Phoebe Fox), a teacher whose young students are evacuated from London during the Blitz. One of her students, Edward (Oaklee Pendergast) has just lost both of his parents to a bombing. Rendered mute from the shock, Edward communicates with pencil and paper when he’s not staring catatonically into space. This provokes cruelty from the other students and a sense of maternal protectiveness in Eve.

Eve and her charges are relocated to Eel Marsh House, the haunted site of the original “Woman in Black.” En route, she meets Harry (Jeremy Irvine), a charming pilot stationed at a base not too far from Eel Marsh House. Sparks are evident, especially when he pays her a visit once she’s settled in at the house. When a vengeful spirit’s name is in the title, however, there’s little running time for hanky-panky, rumpy-pumpy or wistful gazes across crowded rooms.

Fans of the original film know that Daniel Radcliffe’s Arthur Kipps went to town of Crythin Gifford where Eel Marsh House was located. He tells the story of how the unmarried Woman in Black gave birth to a son she was forced to give up to her sister. The son, Nathaniel, was killed by the unusual topography surrounding the road that leads to Eel Marsh House: At high tide, the road is submerged in water, causing Nathaniel to drown while the Woman in Black looked on helplessly. After she died, the Woman in Black returned to haunt Eel Marsh House. Her appearance is a harbinger for the death of a child. In the sequel, the doomed child in question is Edward.

“The Woman in Black 2” is more disappointing than much of the recent crop of PG-13 horror fare because it introduces several ideas that are worth exploring. It brings up issues such as maternal guilt, societal pressure on women and the trauma of losing either one’s child or one’s parents. It ties these elements directly to the supernatural aspects of its plot, and it heightens the tension. As such, the film cannot be easily dismissed as an exercise in sequel-based laziness. Unfortunately, the silly climax and a less than satisfying ending mar all that came before it.

I must point out for sensitive viewers that there is a fair amount of children in peril scenarios here, some of which are potentially or actually fatal. The Woman in Black aims to kill Edward as a form of revenge against Eve, for reasons I’ll leave you to discover. To achieve her goal, our ghostly apparition isn’t above causing the brutal demise of some of Eve’s charges. While not particularly violent, these scenes do have the potential to upset some audience members, so be warned.

As for the actors: Fox does a capable job, even when her dialogue is reduced to yelling “Edward!” or calling out “hello?” as she enters the kinds of dark spaces reserved solely for women in horror movies. She gets a good monologue about the tie she has with her vengeful enemy. Irvine isn’t given much to do besides appear dashing, so his last reel heroics feel a bit off. Pendergast looks like he’s in shock, which makes sense, but the movie keeps his character at such an emotional distance it’s easy to lose focus on the purpose of Eve’s actions.

While it gets points for effort, “The Woman in Black 2” is ultimately unsuccessful. It’s occasionally creepy but never scary despite the last reel histrionics. This is where the black and white cinematography might have helped. It would have accentuated the mood and made the bumpier spots less noticeable. I plan to rent the DVD and watch it again with the color levels down on my TV to see if I were right. 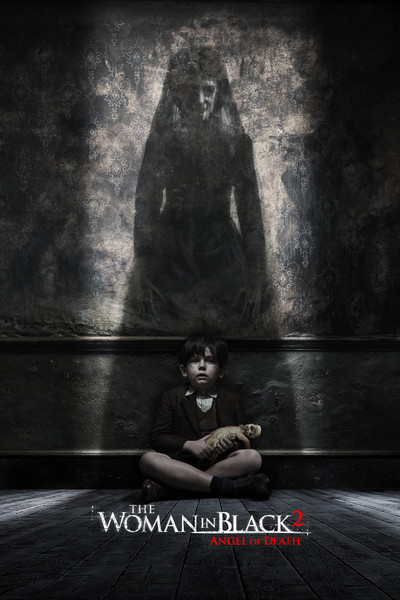 Rated PG-13 some disturbing and frightening images, and for thematic elements