Playing a self-banished, agoraphobic recluse, Naomi Watts delivers a disquieting, mostly one-woman performance in writer/director Alistair Banks Griffin’s “The Wolf Hour.” It’s a drab vision of mental struggle that owes all of its limited draw to its lead—you can’t imagine spending those 90 or so grimy and claustrophobic minutes with anyone other than Watts. But then again, if it’s a sense of nightmarish, escalating disorientation you are after, you could instead be watching the surreal “Mulholland Drive,” with proven proficiency in tapping into Watts’ appealing dark side. There are times Griffin nears that raw madness (with a little “The Shining” mixed in for good measure), once again, entirely thanks to Watts’ dedication. But on the whole, his indecisive “The Wolf Hour” tick-tocks its way to an underwhelming finale. And when it gets there, the most shocking realization you’ll have is how forgettable an affair it all has been.

It’s a shame, because Griffin sets his neo-noir-adjacent psychological thriller in one of the most cinematically juicy eras and locales in American history. We are in the summer of 1977, cramped inside a grubby apartment in a South Bronx walkup that has seen better days. Outside, the .44 caliber killer, Son of Sam, is looming large, the heat is sweltering and somewhere in the city, Travis Bickle is still driving his taxi while the infamous blackout of July ’77 bides its time. But we don’t see any of that however, and settle instead for a diminutive microcosm of the period within the confines of writer June Leigh’s (Watts) apartment, a roomy-ish (by New York standards) living quarter with a view, which used to belong to the author’s grandmother.

Mercifully, Kaet McAnneny’s production design does a fine enough job injecting this mostly indoors-set picture with a real sense of time and place. Amid all the piles of books, dusty nooks and crannies and a mucky kitchen, June watches this “Drop Dead”-era world go by behind her dirt-encrusted windows. Police sirens are constantly within her earshot and the Twin Towers are still erect in her eyesight. If only this once-celebrated counterculture figure could just step outside. But she had decided to lock herself in and put a stop to the troubles she’s caused after one of her successful books destroyed her family. If she never leaves, June figures, she can’t do any further harm. But what if someone is trying to hurt her instead? There are certainly enough clues, the chief of them being an unknown someone incessantly buzzing her intercom to never answer back.

We never really know how long June has been living like this, though the mountainous trash bags scattered in her apartment (which you can almost smell) and Watts’ sweaty breathlessness offer clues that it’s been a while, to say the least. Every now and then, other people walk in and out of the story to release us from mind-numbing monotony, like a concerned but supportive sister (played amicably by Jennifer Ehle), an opportunistic delivery guy/hustler (the always memorable rising star Kelvin Harrison Jr.), a creepy cop and a self-professed midnight cowboy (Emory Cohen of “Brooklyn”), who helps amplify the tension when boredom starts to take over.

The finest (and predictably, the most distressing) segment of “The Wolf Hour” arrives when lights get wiped out across the city. Griffin plays the well-known, violent and chaotic beats of the historical occurrence with impressive believability, aided by Khalid Mohtaseb’s cinematography that accentuates shadows and light flickers with gritty texture. Yet Griffin’s film never really gets anywhere revelatory. Worse, it doesn’t seem to want to. Like the sheltered loner at its center, “The Wolf Hour” feels jailed amongst a string of half-realized ideas, too intimidated to step outside and tackle them head-on. 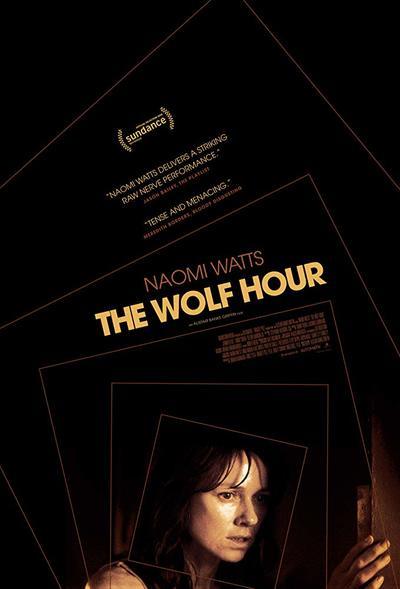