Winter in Scotland is as muted as a wake. The country's so far north, the sun is slow to rise and early to set, and a day can be blindingly bright or always seem like twilight. “The Winter Guest” follows four sets of characters through a day in a Scottish village, and its purpose is not to draw a lesson or tell a story, but to evoke a mood. To see this film is to spend a day in a village near St. Andrews, and with a shock I realized I had once lingered for an afternoon in this village, or one much like it--in August, when the days were long and the trees were green.

Everything is different in winter. The people disappear inside and count on one another. The film opens with a well-coifed woman in her 60s, in a fur coat, making her way across a field in bitter cold. This is Elspeth (Phyllida Law), and she is on her way to the house of her daughter Frances (Emma Thompson). She fears losing her. Frances' husband has died, and she has retreated into an angry silence beyond mourning. Perhaps she will leave Scotland and move away with her teenage son Alex (Gary Hollywood).

Alex has an admirer. Her name is Nita (Arlene Cockburn), and she has a crush on him. Early on the day of the film she ambushes him with a snowball, and at first they scuffle but then they begin to talk, and by the end of the day they will be boyfriend and girlfriend, with all the uncertainty that means at their age.

There are two boys walking by the frozen sea. It is a schoolday, but they have stayed away, and no one will look for them here. They are Sam (Douglas Murphy) and Tom (Sean Biggerstaff), and the emptiness of the town and the quiet of the weekday have made them a little more serious than they planned; they look about 12 or 13, and tentatively talk about more serious things than they would have six months ago.

Two old ladies wait for a bus. They are Lily (Sheila Reid) and Chloe (Sandra Voe), and they are connoisseurs of funerals. Like the girl in Huckleberry Finn who loved to mourn, they find something cheerful about the rituals of death. They scour the death notices and compare notes on funerals past; they are old enough and ordinary enough that no one ever questions them when they attend a funeral; they look like the relatives you are sure you have forgotten.

“The Winter Guest,” based on a play by Sharman Macdonald, follows these four couples and listens to them. There isn't a lot of interaction between them, although Alex does bring Nita home, and she does talk with Frances. Since there is no plot engine to drag them all to the same station, we're forced to decide why they find themselves in this film, and what connection they have. Is the Winter Guest death? Do these couples represent four stages of life? Childhood, courtship, parenthood and old age? The central strands involve Elspeth and Frances. Phyllida Law and Emma Thompson are mother and daughter in real life, and in the film they have the familiarity of a lifelong couple. They know each other's speech rhythms. They look alike. When Frances closes herself off and refuses to talk, the worry lines between Elspeth's eyes seem real--the stress of a mother who loves a daughter and cannot reach her. Frances at one point buries her ears in the bath water to block out words she doesn't want to hear, but it's hard to ignore someone if you're also concerned about them--and Frances is worried that Elspeth is growing older and soon will not be able to take care of herself.

The other three couples have defined roles. They are sure who they are, and more or less clear on how they should be acting on this winter day. But Elspeth and Frances are unsprung. The death of Frances' husband has changed everything, redefined it, ended a stage of life. There is so much pain that talking about it is unbearable, and so the mother and daughter talk around it.

“Winter Guest” is the directing debut of Alan Rickman, an actor who makes intelligent British films (“Truly, Madly, Deeply,” “Sense and Sensibility”) and makes big money as a villain in American films (“Die Hard”). He has great command here of look and tone, and I felt I knew what it would be like to wander the streets of that village in Scotland. But the film left me feeling strangely hollow. Perhaps it was meant to. At the end there is an emptiness, like stepping into air, or like a play interrupted after the first act. 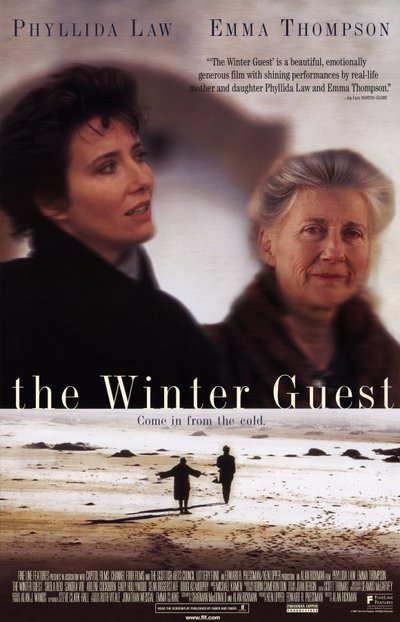