The Wings Of Honneamise

In Japan, animation is not just for family films. There's a booming industry in all kinds of animated films, including adult drama, comedy and even eroticism, and the leading directors are as well known as Spielberg or Tarantino. The genre is often called Japanimation, but its fans scorn that term and prefer "anime," a Japanese word with English origins.

"The Wings of Honneamise," made in 1987 but only now opening in the United States, is one of the most ambitious of all anime productions, a visually sensational two-hour extravaganza about an unkempt and disorganized young pilot named Shirotsugh, or Shiro, who signs up for the Royal Space Force after failing to make the grade as a Navy pilot. He seems on track to become the first man in space, little suspecting the sinister reasons why anyone would risk such an important flight on an officer as shabby as he is.

The Royal Space Force? Where is it based? The movie takes place on a planet that is not exactly the earth; a closing shot from space reveals that the continents and seas have a different arrangement. This world is sort of Japanese and sort of American, and in it an uneasy peace has been reached.

The kingdom's space program has never been taken seriously, and consists of gung-ho pilots and misfit scientists who hang around inventing stuff like old-time barnstormers. (An early scene involves funeral services for a pilot whose urine bag leaked, allowing his space suit to electrocute him.) The Space Force is amazed when its first manned space shot is given priority.

But when the leaders of the kingdom move the launch pad close to its border with a neighboring state, Shiro discovers the reason: They hope the rocket will be seen as provocation, inspiring an attack and justifying war.

Meanwhile, Shiro is on a collision course with his feckless nature. He meets a young woman named Leiqunni, a fundamentalist who passes out leaflets urging people to trust God. She befriends him and brings him to her home, where, in the sort of scene you won't see from Disney, he attempts to rape her and she knocks him out with a statue to the head. The next morning he attempts to "apologize," but she brushes him off and forgives him, inspiring him to take his destiny more seriously. This sort of sudden sexual violence is typical of both anime and Japanese comic books.

"The Wings of Honneamise" was directed by Hiroyuki Yamaga, only 24 at the time, whose drawing style is influenced both by comic books and by the graphic style of the great 19th Century Japanese artist, Hiroshige (whose work also inspired Herge, the creator of "Tintin," Europe's most popular comic hero).

The film doesn't use the Disney style of "full animation," but instead goes for more sensational set-ups and backgrounds, dramatic camera angles, and montages of details - just like American comic books.

Although some of the foreground movements are not as real istic as in a Disney picture, the press notes say "Honneamise" was hand-drawn frame-by-frame; anime's defenders argue that animation should not mimic life but stylize it. The artists visited Cape Kennedy and the National Air and Space Museum on sketching expeditions, and the animated launch looks uncannily like the real thing. The look of the characters is based on Hollywood stars: Treat Williams, young Tatum O'Neal, Lee Van Cleef and Harrison Ford. The score is by Ryuichi Sakamoto, who won an Oscar for "The Last Emperor." One reason the Japanese like anime so much is that it isn't limited by budgets or special effects problems. Anything that can be drawn can be shown, and the artists can use bizarre angles or forced perspectives to create unexpected effects. One of the pleasures of the film is simply enjoying Yamaga's visual imagination, as in amontage at the end, which shows the planet's suffering and turmoil. He also has an offbeat dramatic style, including pregnant pauses where the characters simply look at one another.

Not many examples of anime have played the American theatrical circuit; we're not used to non-family or non-Disney use of the medium. "Akira," an apocalyptic epic, has become a best-seller on video, and the wonderful "My Neighbor Totoro" has been embraced by many parents and children as a special and charming family film. Yet anime fans are a vocal underground, the genre is popular on video and on campuses, and supporters claim that the trademark of anime - the large, dark eyes of the characters - has been appropriated by Disney in all its films since "The Little Mermaid." If you're curious about anime, "The Wings of Honneamise," playing for one week at the Music Box, is a good place to start. 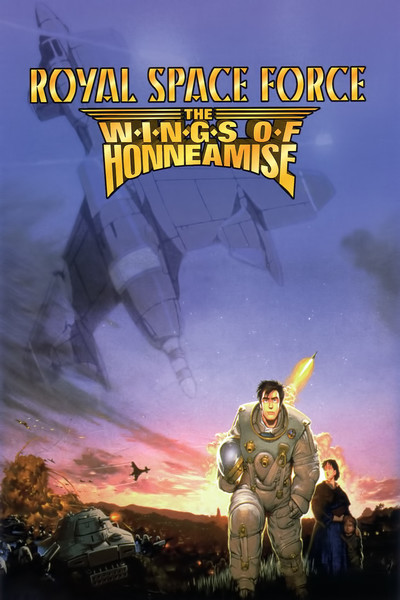