One of those paint-by-numbers romcoms that feels like you might have seen it a dozen times before, Damien Harris’ “The Wilde Wedding” takes place in a plush upstate New York house where the friends and family of Eve Wilde (Glenn Close), a retired movie star, have gathered to celebrate her fourth marriage. The celebrants include husband number one, the preciously named Laurence Darling (John Malkovich), a famous stage actor. The intended groom, Harold Alcott (Patrick Stewart), a successful novelist, arrives with his own family entourage.

As in most movies where the main characters are supposed to be celebrities, there’s a bit of an attempt here to say something about the wages of fame. But mainly having such leads seems a feeble attempt to inject fascination into the characters for viewers who care about such things. Would we be interested in Eve, Laurence and Harold if they belonged to the realm of finance rather than the arts? Probably not. But then, it’s hard to be interested in them as they are drawn here; artists or not, they are dull and stereotypical. Which makes it ironic, no doubt, that what marginal interest the movie has stems from the fact that its (real) stars are also good actors.

Robert Altman could have taken the premise and made a quirky satiric farce out of it, as he did in “A Wedding.” Nancy Meyers might have given us the polished, hilarious Hollywood version. Harris’ approach is a lot more tepidly imagined than either of those possibilities (“The Wilde Wedding” seems to promise to promise a wildness that’s nowhere here). He starts out with teenager Mackenzie (Grace Van Patten), one of Eve’s grandkids, looking into the camera and telling us the backstory: the long-ago romance of Eve and Laurence (here we get to see lots of stills from Malkovich’s and Close’s back catalogue) and the approach of this latest wedding. The girl is spilling this into a video camera because, you see, she plans to make a documentary about the weekend. This is of course a staggeringly hackneyed device—and typical of the film’s lack of originality—but thankfully Harris seldom returns to it.

Once the backstory is given, normal movie mode takes over as we watch the various kids, grandkids and friends arrive. Eve’s house and the way it’s appointed and photographed suggests this is another movie playing to the mentality of “Lifestyles of the Rich and Famous.” The whole place looks like it was conceived as an object of drooling envy (one that remains pristine until Laurence spills a glass of red wine on a white couch; he compares the stain to the mark on Gorbachev’s forehead—one of the movie’s few funny lines).

Once it’s populated, though, we see the setting is less a problem than those inhabiting it. Eve and Laurence’s offspring include early-middle aged guys played by Noah Emmerich, Peter Facinelli and Jack Davenport, the latter accompanied by his ex-wife, supposedly a big rock star played Minnie Driver. Harold’s party meanwhile includes daughters played by Yael Stone, Lilly Englert and Kara Jackson, as well as the apparent girlfriend of one, played by Kara Singer. (This is the kind of ultra-square movie that wouldn’t risk having a gay character but will include a “bi-curious” hottie for titillation’s sake. And naturally, her big sex scene is with a guy.)

I won’t name the grandkids besides Mackenzie, but you get the picture: the movie is overstuffed with characters. It would indeed take an Altman to integrate so many people into a story in interesting ways, and Harris simply doesn’t have the requisite skill-set. Most of the younger characters are pallid sitcom types, and many of the plot lines involve rutting or the promise of it.

That leaves the older characters, who fortunately are played by actors who truly know their business. Although the three wend their ways through the whole plot, it’s only in the last act that we get firm sense of what unites and divides them. Eve, it turns out, really digs Harold but doubts whether her brain and life can accommodate a fourth husband. For his part, Harold thinks he can change—i.e., stop being such a satyr—but is about to run into proof that reform may be impossible. And Laurence, the most interesting character (who occasions the best performance), finds himself charmed by Harold and yet still infatuated with Eve.

It’s thanks to the skills of Malkovich (bald), Close (botoxed) and Stewart (with a full head of hair!) that the movie ends up not a total yawn. They bring life to the characters in ways that give the trite story an unexpected but welcome emotional veracity. Finally, “The Wilde Wedding” deserves what I’ll dub the Anti-“Get Out” Award for using Billy Idol’s “White Wedding” with no evident irony. That may be the funniest thing about it, since if any film qualifies as this season’s White People’s Problems movie, this is it. 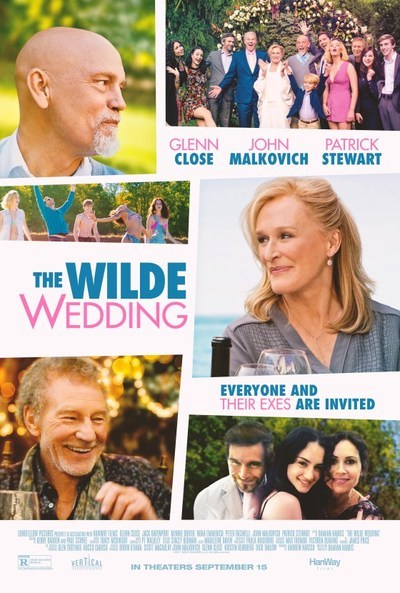 Rated R for language, sexual content and drug use.