The late Chilean filmmaker Raul Ruiz ("The Mysteries of Lisbon," "Night Across the Street") doesn't make accessible films. I say "doesn't" because "The Wandering Soap Opera"—a surreal black comedy that Ruiz shot over the course of six days in 1990—was only completed after Ruiz's death, by Valeria Sarmiento, Ruiz's editor and widow. Funnily enough: Sarmiento's ongoing project of completing and/or restoring her partner's work (including "The Tango of the Widower," his 1967 debut feature) feels very much of a piece with Ruiz's idiosyncratically surreal sensibility and general interest in the fluidity of language, identity, and memory.

"The Wandering Soap Opera" is a typically synapses-frying transmission from Ruiz's subconscious, a movie that will probably seem foreign and impenetrable to even the most well-read Ruiz-ian scholars. Characters from various telenovela-like soap operas invade each other's worlds, though never in a sensible nor intuitive way. They talk over each other, eat with their mouths open, steal each other's spouses, shoot each other in the back, and then disappear (or re-appear) without warning or reason. You'll see shades of earlier surrealist filmmakers' work here (especially Luis Bunuel, but also Marco Ferreri), as well as familiar topics of discussion from Ruiz's earlier films.

But "The Wandering Soap Opera" is also a new film by Ruiz and not just because of its decades-late completion/release date. It often feels like the work of a newly-freed artist still processing what his freedom means given his (at the time) recently concluded exile from his home country (he had previously been exiled from Chile since 1973). "The Wandering Soap Opera" also sometimes feels like it was made by a filmmaker who doesn't understand where he is anymore. That mixture of excitement, confusion, and terror defines all six of the movie's vignettes, which are presented to viewers in order of the dates that Ruiz and his crew filmed them during their week-long shoot. By film's end, we see footage of Ruiz unceremoniously telling his crew that their project is complete; he looks as dazed as I felt after watching 80 minutes of pure Ruiz-ian chaos.

And why not? "The Wandering Opera" may, understandably, annoy some viewers given its cryptic dialogue and fragmentary narratives. But other viewers may want to play along with Ruiz and his gifted cast members, most of whom deliver their bewildering lines with the sort of deadpan grace that made Leslie Nielsen's stone-faced performances in "Airplane" and the "Naked Gun" movies so funny. On Day 1, a romantic tryst is interrupted after an unnamed woman's husband shows up soon after her lover produces a lemon from his pocket ("When I heard the word 'lemon,' I felt it was my duty to come in.") On Day 2, a bureaucrat's dictation session takes a hilariously disruptive turn ("I'm not sure if 'superb' ends with a 'b' or a 'v'. No, no 'd.' With a 'b' or a 'v.'"). On Day 3, various pairs of spies descend on the same parked car and shoot each other while complaining about back pain and political manifestos. And on Day 4, a soap opera actress breaks the fourth wall and explains: "For those who have just arrived, let's be clear: nothing happens in this soap opera. All we do is watch other soap operas and comment on them." But even that explanation is too neat since Ruiz's characters spend most of their time bumping into each other and freely associating about their recurring dreams (a dream lover who shows off his muscles), existential terrors ("God doesn't allow a love that transcends death"), and dark fantasies (A plague has killed all men!).

"The Wandering Soap Opera" is only as powerful as your willing-ness to meet Ruiz and his collaborators on their brain-scrambling level. They talk about repressed traumas and flit around the sources of their anxiety, but never in a direct or reassuring way. Nothing—not one interaction or act of self-expression—is inherently meaningful, as several characters warn us (though never in so many words). A domineering lover insists that "muscles are just meat." An aging hitman complains that his name's not Franklin, but "who cares?" Nobody knows where La Concepcion Street is, but "it sounds familiar." "Everyone looks similar," "what a strange coincidence," "why," "why," "but why?" Maybe because "What comes after doesn't have a name..." Or maybe because "Every veil is an angry and rushed conversation. An unbroadcasted soap opera." Or it could be because "A 'y' never has a dot on it. Only the Latin 'I' does. No, 'Latin' is one word."

Honestly, the strange beauty and humor of "The Wandering Soap Opera" defies rational explanation: hints of meaning are about as close as you're going to come to "getting" this particular film. But what a thrill to come that close, especially when there's so much here to laugh at and wonder about. Raul Ruiz is dead; long may he live. 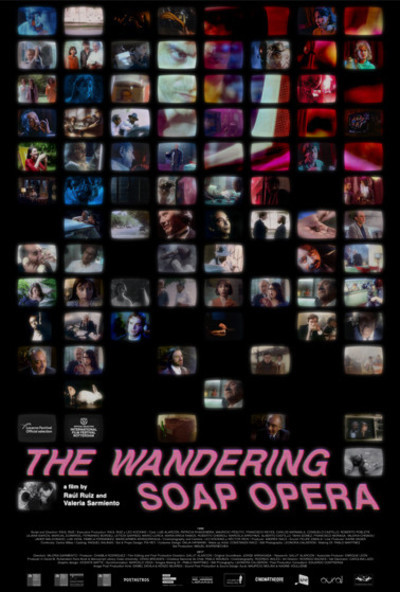