M. Night Shyamalan had his heyday almost 20 years ago. He leapt out of the gate with such confidence he became a champion instantly. And then...something went awry. He became embarrassingly self-serious, his films drowning in pretension and strained allegories. His famous twists felt like a director attempting to re-create the triumph of "The Sixth Sense," where the twist of the film was so successfully withheld from audiences that people went back to see the film again and again. But now, here comes "The Visit," a film so purely entertaining that you almost forget how scary it is. With all its terror, "The Visit" is an extremely funny film.

There are too many horror cliches to even list ("gotcha" scares, dark basements, frightened children, mysterious sounds at night, no cellphone reception), but the main cliche is that it is a "found footage" film, a style already wrung dry. But Shyamalan injects adrenaline into it, as well as a frank admission that, yes, it is a cliche, and yes, it is absurd that one would keep filming in moments of such terror, but he uses the main strength of found footage: we are trapped by the perspective of the person holding the camera. Withhold visual information, lull the audience into safety, then turn the camera, and OH MY GOD WHAT IS THAT?

"The Visit" starts quietly, with Mom (Kathryn Hahn) talking to the camera about running away from home when she was 19: her parents disapproved of her boyfriend. She had two kids with this man who recently left them all for someone new. Mom has a brave demeanor, and funny, too, referring to her kids as "brats" but with mama-bear affection. Her parents cut ties with her, but now they have reached out  from their snowy isolated farm and want to know their grandchildren. Mom packs the two kids off on a train for a visit.

Shyamalan breaks up the found footage with still shots of snowy ranks of trees, blazing sunsets, sunrise falling on a stack of logs. There are gigantic blood-red chapter markers: "TUESDAY MORNING", etc. These choices launch us into the overblown operatic horror style while commenting on it at the same time. It ratchets up the dread.

Becca (Olivia DeJonge) and Tyler (Ed Oxenbould) want to make a film about their mother's lost childhood home, a place they know well from all of her stories. Becca has done her homework about film-making, and instructs her younger brother about "frames" and "mise-en-scène." Tyler, an appealing gregarious kid, keeps stealing the camera to film the inside of his mouth and his improvised raps. Becca sternly reminds him to focus.

The kids are happy to meet their grandparents. They are worried about the effect their grandparents' rejection had on their mother (similar to Cole's worry about his mother's unfinished business with her own parent in "The Sixth Sense"). Becca uses a fairy-tale word to explain what she wants their film to do—it will be an "elixir" to bring home to Mom.

Nana (Deanna Dunagan), at first glance, is a Grandma out of a storybook, with a grey bun, an apron, and muffins coming out of the oven every hour. Pop Pop (Peter McRobbie) is a taciturn farmer who reminds the kids constantly that he and Nana are "old."

But almost immediately, things get crazy. What is Pop Pop doing out in the barn all the time? Why does Nana ask Becca to clean the oven, insisting that she crawl all the way in? What are those weird sounds at night from outside their bedroom door? They have a couple of Skype calls with Mom, and she reassures them their grandparents are "weird" but they're also old, and old people are sometimes cranky, sometimes paranoid.

As the weirdness intensifies, Becca and Tyler's film evolves from an origin-story documentary to a mystery-solving investigation. They sneak the camera into the barn, underneath the house, they place it on a cabinet in the living room overnight, hoping to get a glimpse of what happens downstairs after they go to bed. What they see is more than they (and we) bargained for.

Dunagan and McRobbie play their roles with a melodramatic relish, entering into the fairy-tale world of the film. And the kids are great, funny and distinct. Tyler informs his sister that he wants to stop swearing so much, and instead will say the names of female pop singers. The joke is one that never gets old. He falls, and screams, "Sarah McLachlan!" When terrified, he whispers to himself, "Katy Perry ... " Tyler, filming his sister, asks her why she never looks in the mirror. "Your sweater is on backwards." As he grills her, he zooms in on her, keeping her face off-center, blurry grey-trunked trees filling most of the screen. The blur is the mystery around them. Cinematographer Maryse Alberti creates the illusion that the film is being made by kids, but also avoids the nauseating hand-held stuff that dogs the found-footage style.

When the twist comes, and you knew it was coming because Shyamalan is the director, it legitimately shocks. Maybe not as much as "The Sixth Sense" twist, but it is damn close. (The audience I saw it with gasped and some people screamed in terror.) There are references to "Halloween", "Psycho" (Nana in a rocking chair seen from behind), and, of course, "Paranormal Activity"; the kids have seen a lot of movies, understand the tropes and try to recreate them themselves.

"The Visit" represents Shyamalan cutting loose, lightening up, reveling in the improvisational behavior of the kids, their jokes, their bickering, their closeness. Horror is very close to comedy. Screams of terror often dissolve into hysterical laughter, and he uses that emotional dovetail, its tension and catharsis, in almost every scene. The film is ridiculous on so many levels, the story playing out like the most monstrous version of Hansel & Gretel imaginable, and in that context, "ridiculous" is the highest possible praise. 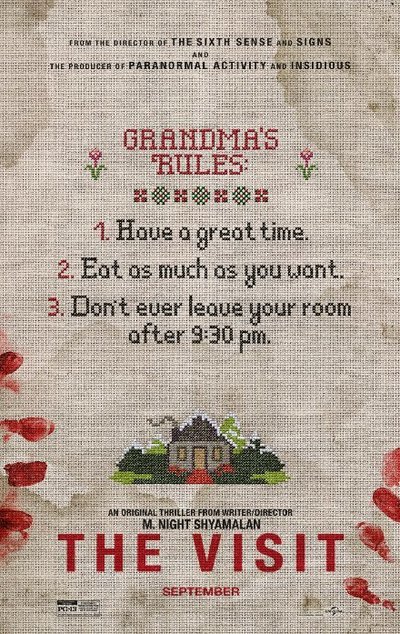 Rated PG-13 disturbing thematic material including terror, violence and some nudity, and for brief language