When Wile E. Coyote wasn’t busy in his eternally fruitless pursuit of the Road Runner, he also appeared in a second string of shorts opposite Bugs Bunny, in which he'd inform Bugs that he was going to catch and eat him and that there was nothing to be done because he was so obviously Bugs’ intellectual superior. Inevitably, the next few minutes would find the Coyote enduring one painful mishap after another caused, in most cases, by the combination of his ego-driven overconfidence and his spectacular incompetence at the very things he professed to be his specialties. If you've ever wondered what it would be like to see one of those cartoons stretched to a feature-length running time, transformed into live-action, and presented within the context of a story with only inadvertent laughs, then “The Virtuoso” is for you.

Our central character, played by Anson Mount, is a hit man who remains nameless throughout but who has a high enough opinion of his skills to actually refer to himself as, yes, a virtuoso. During the first ten minutes, we hear him narrate at great length about the skill and precision that he's putting into his latest job—which, for extra pretentiousness, he delivers in the second person. Having established his self-appointed bona fides as a master of control, precision, and efficiency when it comes to the art of taking a life, he then blows things spectacularly when his intricate plan goes sideways in a manner that not only takes out his target but which causes a Winnebago to explode on a city street, causing the woman unfortunately standing next to it to catch fire and burn to death in front of her child.

Anyway, after an anxious night or two of the soul, Mr. Virtuoso is contacted by his handler (Anthony Hopkins) about a new job he cannot refuse. During his earlier ramblings, he informs us that the more important or high-ranking the target, the scantier the advance intelligence regarding who is being targeted. This time around, the only information that he is given is the address of a rural diner and the directive to be there at 5PM. When he arrives at his destination, the diner contains an odd loner (Eddie Marsan) sitting in the corner, a couple (Richard Brake and Diora Baird) at a table, a deputy (David Morse) at the counter and a relentlessly cheerful waitress (Abbie Cornish) who is running the place single-handedly and who seems perfectly willing for our hero to kiss her grits right then and there, so to speak.

The idea, it would seem, is to figure out which one of the diner denizens doesn’t belong and then proceed from there. Unfortunately, everyone seems to be fairly superfluous, and so Mr. Virtuoso waits for them all to leave and then begins to track them down in order to get more information as to who they are and whether they are his target or not. Alas, he continues to fail to live up to his name by making one rookie mistake after another, creating an ever-growing pile of bodies while having no idea if any of them is who is supposed to kill, or if they are all collateral damage.

The conceit of “The Virtuoso,” a hitman thriller in which the killer has to figure out the identity of their target, is not an unpromising one. I can imagine any number of filmmakers—Alfred Hitchcock, Brian De Palma, and Larry Cohen immediately spring to mind—who might have done interesting things with it as long as they had a screenplay containing a smartly conceived story and interesting characters, compelling performers, and a pace quick enough to keep viewers from recognizing all the flaws in the narrative logic until long after the end credits rolled.

Needless to say, none of those qualities are on display here. The screenplay by James C. Wolf is one of those contraptions that's more concerned with being clever than smart or coherent to the point where precious little of it makes any sense by the end—it's one of those films where you can pretty much figure out exactly where it's going by about the 30-minute mark but you probably could not properly explain exactly how the screenplay reached that conclusion. Director Nick Stagliano doesn’t help matters much by presenting the material with a poky pace that does not exactly bring the narrative to vivid life.

The film's other problem is that while there are a number of good, strong, and charismatic actors in the cast as the potential targets—Cornish, Morse and Marsan have all done tremendous work in the past—they are only supporting players and can only do so much. Instead, the focus is on the comparatively bland Mount, who proves to be so insubstantial in the role (you never buy him as this coolly brilliant killer for a second) that his very lack of presence ends up undermining the entire film. As for Hopkins, he only turns up for a few minutes in a role that was clearly shot in perhaps a couple of days tops. While he has been in worse films than this during his career, I cannot immediately recall a lazier turn from him than this one.

Too dumb to actually be any good and too dull to at least be entertainingly bad, “The Virtuoso” is a complete waste of time for everyone involved. For anyone who does somehow find themselves in the unenviable position of having to actually sit through it at some point, you can at least be confident that you will pretty much forget everything about it as soon as it is over and quite possibly before that.

Now playing in select theaters, and available on demand and on digital platforms. 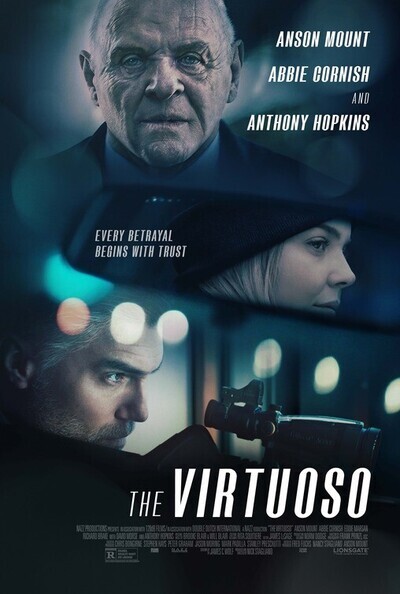 Anthony Hopkins as The Mentor

Abbie Cornish as The Waitress

Anson Mount as The Virtuoso

Eddie Marsan as The Loner

David Morse as The Deputy