A good location isn’t worth much in the Spanish heist movie “The Vault,” which is mostly set in or around Madrid’s historic Bank of Spain building. The film from director Jaume Balagueró is not the first recent caper to feature the Bank of Spain—there’s also the ongoing Netflix series “Money Heist,” which debuted in 2017—and that’s sort of the problem: the makers of “The Vault” don’t seem to know how to show off the Bank of Spain, or any of their movie’s other potentially attractive features.

“The Vault” is consequently a paint-by-numbers caper about a crew of hard-working amateur bank robbers, who, under the leadership of blue collar salvage expert Walter (Liam Cunningham), chase after a chest of 17th century gold coins. (Walter initially recovered this bounty from the bottom of a Spanish shipwreck, but his booty was soon taken by the Spanish authorities.) Most of the plot is strictly formulaic: Walter and his fellow crew members scheme over building plans and computer monitors, improvise and double-cross each other whenever appropriate, and are often chased by Gustavo (Jose Coronado), an ill-tempered ex-military security officer. You’ve probably seen movies like “The Vault” before, only set in another country, and featuring a lot less exposition.

Then again, a familiarity with movies like “The Vault” is probably why you might watch it in the first place. Most of its characters are defined not only by their roles in Walter’s team, but also the tics and quirks that have come to define those roles in a variety of other heist movies, some better than others. If you’re wondering if you’ll like this film, take a look at its dramatis personae, starting with “the mastermind,” as one character calls him: Thom (Freddie Highmore), a super-intelligent and highly sought after engineering student.

The bank’s Spanish setting should matter more since that’s ostensibly what sets “The Vault” apart from the other bastard children of the recently rebooted “Ocean’s Eleven” heist movies (Thom even likens Walter to Danny Ocean). After all, Walter has timed his group’s heist so that it coincides with Spain’s soccer matches during the 2010 FIFA World Cup. Unfortunately, the only uniquely Spanish things about “The Vault” are Simon’s infrequent quips about Gustavo and his employers’ “very Spanish” behavior. Gustavo is otherwise a stock character, a Javert-like antagonist who can’t let go of the attitude or the training he picked up when he led an anti-terrorism task force.

To be fair: you probably shouldn’t expect much from a movie whose protagonists all talk and act like they’re refugees from better genre movies. Walter and his team pow-wow in “the war room” and say things like “the security system is now our b***h.” They also use pre-recorded video footage to trick the Bank of Spain’s guards, and over-explain any part of their plan that’s even vaguely technical, presumably for easily distracted and/or confused viewers. And while Walter’s people do their thing, Gustavo squints off-camera at a bank of glowing TV monitors and wonders about the thieves’ activities. There’s some light ticking clock suspense and a few double-crosses, too. None of it’s enough to make “The Vault” more or less of what it is.

“The Vault” also focuses on plot points and character motives we’ve either already seen before or simply don’t need to see again. There’s a lot of dialogue that, on the surface, reveals the characters’ motives, but really, all you need to know is: Walter’s teammates all have egos and are mostly chummy because, uh, teamwork?

Thom’s a perfect example of this sort of dim Xerox copy dramaturgy: he accepts Walter’s proposition because the Bank of Spain’s security system poses a great technical challenge and Walter seems to be an honorable thief. Thom’s generic nice guy character is also confirmed when he decides that he must join Lorraine and James when they break into the Bank of Spain’s vault. The logic behind this decision is simple enough to be genre movie short-hand: Thom wouldn’t ask anybody to do something that he wasn’t prepared to do himself.

These are all fine declarations of intent, but they take too much time, and feel like so much unnecessary padding between already sluggish and visually flat set pieces. “The Vault” is not, in other words, just derivative—it’s also flabby and bland. While the Bank of Spain may be a great setting for a heist, there’s nothing in “The Vault” to suggest that the bank (or anything in it) is interesting enough to compensate for uninspired storytelling.

Now playing in limited theaters and available on digital platforms. 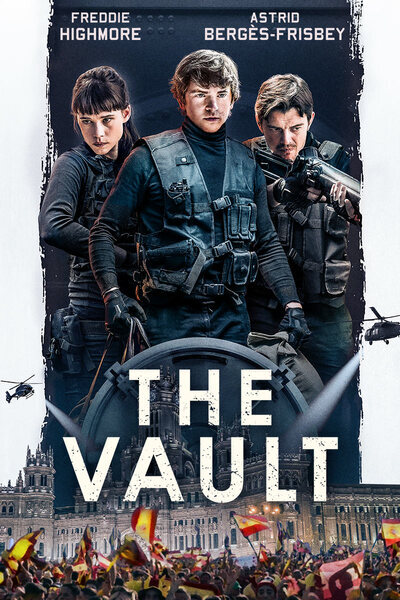