“The Vanished” is engineered to make the viewer start asking questions from the very beginning. Although if I get into what those questions are likely to be, I’d possibly be spoiling some of the film’s potential pleasures.

This new picture written and directed by the actor Peter Facinelli (who also appears in a support role as a deputy) stars Thomas Jane and Anne Heche (seen together some years ago in a very different context on the cable series “Hung”) as a couple with seemingly few cares and at least one great blessing. We see them singing happily as they tool down a woodsy back road in a big ole RV, their ten-year-old daughter Taylor (Kk Heim) happily singing with them as their adorable pug Lucky romps around.

Soon things get a hair darker; pulling into an RV park, they don’t get the warmest of welcomes from its surly manager. The younger caretaker is a little off; as the movie continues, he evolves into something resembling the protagonist of the Onion’s “Ask A Faulknerian Man Child” article. There’s also some crazed Dave Bautista-looking dude (actually played by a Mitchell L. Johnson) roaming through the woods. After Jane’s Paul spends a few distracted minutes speaking to a fellow RVer named Miranda (Aleksei Archer), he just looks around and Taylor is gone. Enter Jason Patric’s Sheriff Baker, who informs Paul and Heche’s Wendy that there’s an escaped convict on the loose too. Yeesh. And as we soon learn, Baker’s a hard-drinking man with marriage problems and a lost child in his own past.

Facinelli overstocks his plot for a reason: to keep the viewer off balance, not just to maintain tension but to camouflage his ultimate coup de grace. Additionally unsettling are the ways that Wendy and Paul deal with their confusion and trauma. Wendy, for one, goes out into the woods with Paul’s gun. And finds …somebody.

Paul is weirder. When Wendy and Paul are compelled to rifle through the trailer belonging to Miranda and her husband, Paul finds a camera full of nudes of Miranda and ogles them at length. He then finagles Wendy into a little sexual activity later. Life finds a way, right? This is on day two of the disappearance.

Don’t worry—you do indeed find out what’s with this guy. Amid all the red herrings and misdirections there are some not insubstantial holes. The surly RV Park manager’s residence has a whole long wing that the investigating cops aren’t interested in having a cursory look at, and of course it contains some secrets. And while Facinelli stages and shoots his material with better-than-average confidence and flair, every now and then he’ll break out the sort of camera move that inspired Andrew Sarris to coin the phrase “the wasteful pan.”

But I have to admit: the wrap up got me good, enough to make me admire Facinelli’s ambition and handling of mechanics. The movie’s original title was “Hour of Lead,” a phrase from the Emily Dickinson poem that is laid out in white type before the opening credits. One can see why a film distributor or producer might not want that as a title. The movie is certainly not leaden; nor is it as generic as its current title might indicate. 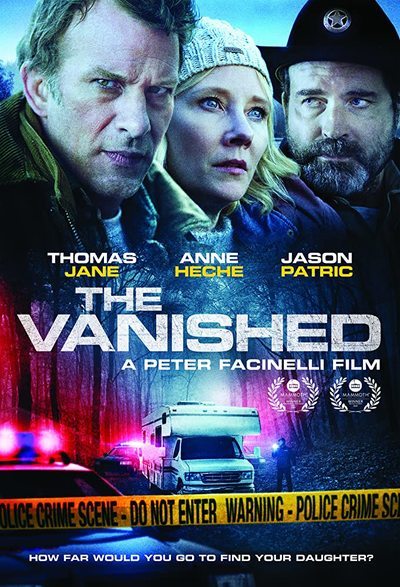