“The Unicorn” marks the actor and musician’s second time in the director’s chair, and it is an endearing symphony of misread cues, fumbling advances and accidental epiphanies. The stunted growth of modern day thirty-somethings is well-worn subject matter, yet Schwartzman—being a member of the generation himself—approaches it from an empathetic and refreshingly nonjudgmental perspective. As Gen Z trailblazers such as sex ed blogger Eileen Kelly are working to obliterate the stigmas that continue to govern so many lives, both personal and public, a film like this could prove healing. Couples who see it together may feel spurred to step outside their comfort zones, asking each other questions that might’ve once been considered out of bounds.

Of course, no romantic comedy is worth a hill of beans unless we enjoy spending time in the presence of its leading lovers, and that quickly proves to be the case with Malory (Lauren Lapkus) and Caleb (Nick Rutherford). This isn’t the sort of tiresome “line-o-rama” marathon where the majority of the laughs are confined to the trailer and antiquated blooper reel, though one does indeed materialize during the end credits. Right from the pre-title sequence, Schwartzman fully involves us in the warm yet somewhat weary dynamic between his protagonists. Before heading to the annual vow renewal of Malory’s parents, Caleb proposes to her with a ring made out of his wisdom tooth. When onlookers offer their congratulations, Mallory wryly informs them that this event is far from noteworthy, since they’ve been engaged for four years. This is, alas, a “re-proposal.”

As they brace themselves for the inevitable onslaught of quizzical stares and passive aggressive jabs from family members, Caleb sighs, “This is going to be rough,” to which Mallory quips, “It’s going to be like pulling teeth.” Both seasoned comedians, Lapkus and Rutherford possess the quality of self-awareness singled out by Richard Dreyfuss, during our recent interview, as being among his most cherished. Their acknowledgment of a situation’s inherent absurdity enables us to laugh with them rather than at them, resulting in numerous side-splitting moments of recognition.

The titular “unicorn” is a reference to the seemingly elusive breed of human willing to join a couple as the third member of a threesome. People open to this sort of arrangement are relatively uncommon, yet there are countless others who fantasize about it. What is a film camera if not a “unicorn,” in essence, inviting the viewer to share in the sensations—thereby, to a degree, participating in—the lovemaking that is occurring, however staged, before its lens? Filmmaker Joanna Coates explored the polyamorous relationship between four young adults in her 2014 gem, “Amorous,” where she suggests that this sort of intimacy may be preferable to the isolationism puritanically enforced through the ages.

Could a group scenario truly be more nurturing for all involved? It certainly appears to have worked for Malory’s sexually liberated parents (Beverly D’Angelo and John Kapelos), whose rumored ménages à trois cause their flummoxed daughter to defy her fiancé’s sleep tracker app, insisting that they spend a night on the town prior to the anniversary festivities. What follows is a would-be swinger version of Sam Mendes’ “Away We Go,” as Malory and Caleb cross paths with an assortment of eccentric types who inadvertently help clarify the direction of their union, while unearthing truths that have long been buried.

Rutherford co-wrote the script with Kirk C. Johnson and Will Elliott, and one of its finest passages is a monologue delivered by Caleb about a memory of homoerotic tension from his youth. It’s a sign of progress that his story isn’t utilized for disparaging gags fueled by “gay panic,” or that a mortified expression from Malory isn’t framed as the punchline. She listens to his words with a mixture of bemusement and understanding, while freely admitting that her sexuality also exists on a spectrum—she dated a girl at Oberlin, which she assures is quite common. Malory’s interest in women is further heightened by Jesse (Lucy Hale), the first potential “unicorn” to prance into her and Caleb’s view. In tune with vibrations both spiritual and sensual, this twenty-something proves to baffle the couple, as they strain to appear as hip and confident as she does.

Her seemingly flirtatious overtures and lack of fear regarding nudity don’t automatically translate to a sexual attraction to whomever she invites over, though, and Schwartzman perhaps stays a touch too long on this set piece, lingering on it long after we’ve figured out where it’s going. Many of the film’s twists can be guessed long before they arrive—heck, the biggest of them all occurs at a motel named “The Twist.” Yet the writers and game ensemble of improvisers continually find ways to subvert certain contrivances of indie cinema, such as when a man in a wheelchair is triumphantly pushed in slow motion, only for him to get up and reply, “I can walk, you know.”

Both members of Rutherford’s Good Neighbor comedy troupe deliver scene-stealing work here: Beck Bennett as a bouncer at the male strip club “N10CT,” pronounced “Intensity,” and Kyle Mooney as a desk-bound dweeb not unlike the one he played in Augustine Frizzell’s “Never Goin’ Back.” (I actually had to double-check the cast lists just to make sure they weren’t the same character.) Yet this is Lapkus and Rutherford’s show, through and through, and they never ceased to make me smile. Even when their characters have no clue what they’re doing, it’s a joy to watch them hurl themselves into the unknown with as much conviction as they can muster.

It’s touching to watch them role play for each other, thinking the other person is more into a near-threesome as they are themselves, until they realize that they are actually on the same page. I also love how they stumble through their call with April (Dree Hemingway of “Starlet”), a “couples’ massage service” provider who Malory refers to as “baby” before immediately regretting it (“I feel like a jazz musician,” she observes, upon hanging up). Like all good titles, “The Unicorn” can be taken to mean many things, and for me, it represents the notion of “perfection” mentioned ad nauseam by Malory’s family that couldn’t possibly exist, and ultimately serves as a facade for masking insecurities. Whether or not Malory and Caleb decide to get married is irrelevant. What matters is that they are together in their pursuit for fulfillment, wherever they may happen to find it. 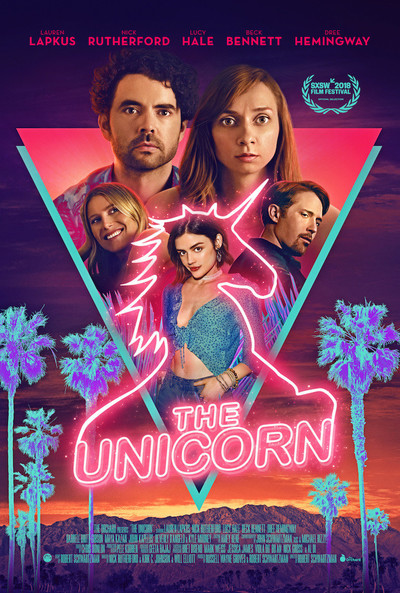