The True Adventures of Wolfboy

We have a certain expectation of a fairy tale hero—a handsome prince, gallant and courageous, sometimes blond, often wearing armor, able to defend himself and others—and “The True Adventures of Wolfboy” scoffs at it. Who does that narrow definition of bravery really capture? Who does it keep out? A coming-of-age story that melds fantastical elements with its exploration of what it’s like to grow up looking different from everyone else, “The True Adventures of Wolfboy,” with its affecting performances and direct rejection of normalcy, works like a charm.

“The True Adventures of Wolfboy” begins with a mantra: “I’m normal, I’m a regular kid, I’m just like everyone else,” repeats 13-year-old Paul (Jaeden Martell) over and over again while staring into a mirror. But the face staring back, despite the newly minted teenager’s desperate wishes, doesn’t change. Paul has congenital hypertrichosis, a condition that causes abnormal hair growth all over his face and body. His father Denny (Chris Messina) doesn’t have it, and his mother isn’t around, and so Paul doesn’t know how he came to look this way. But he always has, and he’s always suffered as a result.

He wears a red ski mask to cover up his face in public. He’s tortured by bullies who urge him to bark like a dog, who insist that his father must have engaged in bestiality to result in Paul looking this way, who are unrelenting in their cruelty. But for Paul, the issue isn’t these kids—they’re awful jerks, but he’s used to the second glances and the stares and the horrified looks. The issue is his father, who is trying to toughen Paul up. At a carnival they attend for Paul’s birthday, all of those simmering familial frustrations explode: When Denny insists, firmly but not unkindly, that Paul stand up straight, speak loud, take off his mask, and don’t run—all as a way to teach his son dignity—Paul balks.

The exercise is a disaster, another indication of how Denny doesn’t really understand what his son is going through. So when a mysterious gift arrives from Paul’s long-absent birthday with a map to Pennsylvania and a note that promises “when you’re ready, there is an explanation,” Paul decides to run away and embark on a quest to find his mother, and some answers. The journey, which benefits from zippy pacing, is divided into chapters that are introduced via illustrated intertitles that imagine Paul as a fantastical hero: a knight fighting a three-headed dragon in “The Dragon’s Dilemma,” coming upon a beautiful mermaid with a teal tail and seashell hair in “Wolfboy Meets a Mermaid,” and swashbuckling around with a maniacally grinning rogue in “Wolfboy and the Pirate Queen.”

Those characters sync up with who Paul meets along the way, other teenagers who become his first real friends. Aristiana (Sophie Giannamore), an aspiring singer in the mold of an experimental Audrey Hepburn, who performs at a local queer bar despite the objections of her conservative, abusive mother, who insists on using her deadname Kevin. Rose (Eve Hewson), an eyepatch-wearing wild card who doesn’t have to try too hard to convince Paul to join her in a life of crime. While Denny worries at home, two competing factions are chasing his son: The police, led by Detective Pollok (Michelle Wilson), and Mr. Silk (John Turturro), a carnival proprietor with an understandable grudge against Paul. While the former represents typical law and order, Mr. Silk is more of an outsized, fantastical villain, all drawling threats and sharp teeth. “We give the people what they want. What they fear. There’s a power in that,” he says to Paul. But is Paul, who so desperately craves normalcy, ready to fulfill strangers’ worst expectations?

Writer Olivia Dufault is intentional in how she considers the otherness caused by Paul’s physical appearance, and pairs him with characters who are experiencing their own transformations: Aristiana, who has found her own gender identity and is blossoming because of it, and Rose, whose charismatic rebelliousness is covering up a certain insecurity. Martell, Giannamore, and Hewson make a solid ensemble—alternately bemused, invigorated, and afraid—and Martell in particular does an excellent job communicating his anger and sadness with a nuanced vocal performance. The shaky breath Paul takes between the words “I’m” and “a normal kid” speaks volumes. Director Martin Krejcí walks a fine line in incorporating the film’s more fairy-tale elements, in particular the scorpion-wielding, tequila-and-cinnamon-drinking Mr. Silk, and ultimately finds a balance that doesn’t diminish the reality of Paul’s medical condition or the intensity of his initial feelings of abandonment and then rebirth.

“Did I mean anything to you at all?” Paul imagines asking his mother, and “The True Adventures of Wolfboy” doesn’t shy away from the complicated feelings about belonging and selfhood that infuse every adolescent experience. The hero’s journey of “The True Adventures of Wolfboy” is a recognizable one, but the narrative honors its characters with so much interiority, imbues their interactions with tangible relatability and cleverness, and emphasizes so thoroughly the importance of compassion and kindness that the film becomes something precious, valuable, and rare. 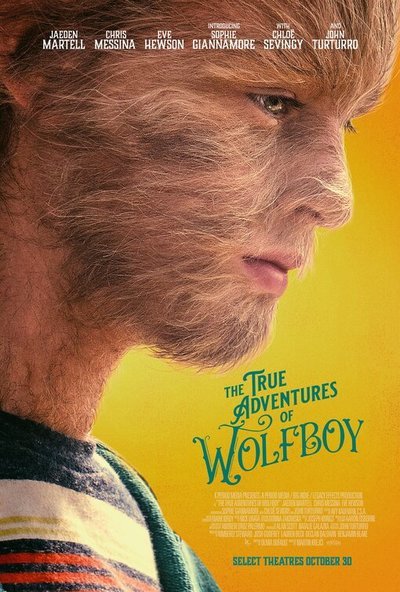 The True Adventures of Wolfboy (2020)