The Trip to Italy

The founder of this site once said a very wise thing. Well, he actually said quite a few very wise things, but here’s one I go over and over pretty frequently: "There are two things you can't argue in film: comedy and eroticism. If something doesn't make you laugh, no one can tell you why it's funny, and it's difficult to reason someone out of an erection." That’s pretty funny in and of itself. Anyway, I’ve always respected Roger Ebert’s rule of comedy, which he articulated differently in various pieces over the course of his life, and which I distilled in my own mind as an instruction: If something’s funny, and you laugh at it a lot, you’ve gotta own it. (If you know me at all, you also know that I’ve got a laugh that’s kind of hard not to own—when I lose it, it’s pretty loud. I think Fox Searchlight bought “Napoleon Dynamite” at Sundance partially in the strength of my reaction to the steak-throwing joke.)

So here’s the breakdown: I laughed like a maniac at the Michael-Caine-impersonation reprise performed by comic actors Steve Coogan and Rob Brydon at the front end of “The Trip To Italy,” the followup (to call this a sequel is kind of special pleading, really) to “The Trip.” The difference, by the way, being that in the prior film—both are distilled from somewhat longer television mini-series-es broadcast in Great Britain—the fellows gallivanted around the British countryside and in this picture they are in, you guessed it, Italy. To get back to the record, I also laughed like a maniac at the pictures end, in which Brydon and Coogan discuss various James Bonds in front of an appreciative audience of actors playing the publicist and teenage son of the characters played by Brydon and Coogan, who are lightly fictionalized versions of themselves. And I laughed consistently and appreciatively at many of the scenes in between, some of which depict the actors singing along to an Alanis Morrissette CD.

So if you go in for allusive British humor that builds slowly from dry to uproarious, as executed by two absolute masters of the form, “The Trip To Italy” will work for you, I believe. I also think the film, directed, like the prior one, by the astute Michael Winterbottom, is a somewhat smoother trip than the first. In that one, Coogan, who’s better known internationally than Brydon, was the focus, and the movie’s plot, such as it was, was hooked into his work and personal anxieties as he took a break from his Hollywood career just as it entered a pivotal moment. Here the focus is on Brydon, who gets a call from Hollywood, and also succumbs to a vacation flirtation that results in a pretty serious domestic misstep. Because the viewer is arguably less familiar with Brydon, the fiction is more convincing; we’re spared the potential distraction of trying to separate and/or combine the “real” person from the character he’s playing. Which leaves us more focus for the incredible-looking Italian meals the pair sample (these trips are foodie fodder for newspaper articles Brydon writes), and the impeccably delivered banter they exchange. It all looks scrumptious, which makes this movie a terribly refreshing one with which to close out the summer. 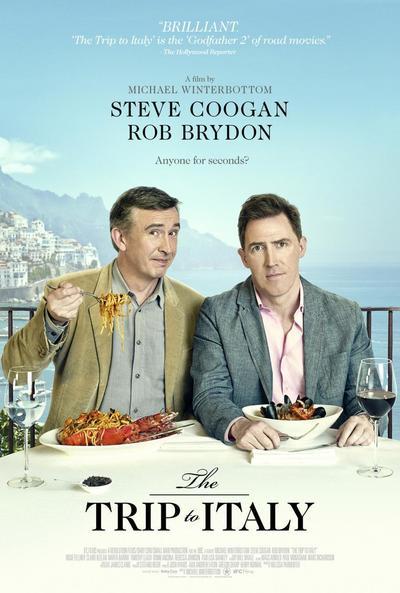