Chris Pratt took all the clout and popularity he amassed from starring in the “Jurassic World” and “Guardians of the Galaxy” franchises and used them to make ... “The Tomorrow War,” a blandly derivative and overlong sci-fi thriller.

Originally scheduled pre-pandemic to premiere in theaters, it’s now arriving on streaming through Amazon Prime Video, but it’s hard to imagine that watching this on the big screen would have improved the experience significantly. With his first live-action feature, “The LEGO Batman Movie” director Chris McKay stitches together several overly familiar elements in unremarkable fashion: a bit of time travel, a horde of relentless alien invaders, a rag-tag band coming together to stop them, some unresolved father-son issues and a few misfit sidekicks to provide comic relief. The supposedly original script from writer Zach Dean offers very little that’s innovative or inspired.

Amid all this hackneyed madness is Pratt, straining to tap into dramatic chops he simply doesn’t have. He can be wildly charismatic zipping through the Marvel Cinematic Universe as the cocky Peter Quill, or he can be an engaging action hero handling dinosaurs as the brave Owen Grady. He’s also an infectious charmer in “The LEGO Movie” series as the voice of sunny Emmet Brickowski. But playing a bland suburban dad struggling to save his family—and all of humanity—isn’t Pratt’s strong suit. It gives him no room to swagger.

And then once he gets thrown into the mayhem of jumping forward in time to stop the marauding aliens, his frequent wide-eyed, mouth-agape expression inadvertently calls to mind that famous Pratt meme from his pre-hunky days on NBC’s “Parks and Recreation.” Then again, we’d probably all react that way to being thrown 30 years into the future and then dropped from the sky into a high-rise rooftop swimming pool, as Pratt’s character is in the film’s opening sequence.

Human visitors from the year 2051 have traveled back in time to the present day to warn us that an alien invasion has besieged Earth, and civilians must leap ahead three decades to help fight them—that’s how decimated the population has become. Among them is Pratt’s Dan Forester, a mild-mannered high school science teacher and Iraq war veteran. While he’s reluctant to leave his wife (an underused Betty Gilpin) and bright, nine-year-old daughter (the self-possessed Ryan Kiera Armstrong), he’s also proclaimed at the film’s start: “I am meant to do something special with my life,” as so many mediocre, middle-aged white men have before him. This is that thing.

Before he gets zapped, though, he must confront his estranged father (a seriously buff J.K. Simmons), which provides an opportunity for overacting and an indication of the histrionics to come. And as he’s getting fitted with the armband do-hickey that will transport him to the future for his week-long tour of duty, he learns he’s going to die in seven years anyway. Among the other soldiers in his troop are the nervous tech nerd Charlie (Sam Richardson of “Veep”) and the wisecracking weirdo Norah (Mary Lynn Rajskub). There’s not much to any of these characters.

What they’re all forced to confront upon arrival, whether they’re ready or not, is an army of albino creatures known as White Spikes. They scamper and gnash, have tentacles that strangle and slash, and they make a staccato growl like the sound you hear in “Predator.” They also look extremely cheesy, either individually or en masse. There’s something jumpy not only about the way they move but also about how the giant action scenes are edited. They have a slick, incessant mania to them that’s distancing. It certainly doesn’t help that everything is smothered with a barrage of gunfire and Lorne Balfe’s overwhelming score.

Through it all, Pratt runs, grunts, shoots or yells “Nooo!” in slow motion. A lot. And that’s some of his more believable work here. Less impressive are his scenes with Yvonne Strahovski as the no-nonsense colonel delivering orders; she connects with him, in part, because of his military background. The “Handmaid’s Tale” standout is also the actor who emerges the most unscathed from this slog, delivering clunky, expository dialogue within this wild setting with surprising understatement. Pratt, however, seems outmatched opposite her.

In the last half-hour, “The Tomorrow War” finally gives in completely to its “Alien” influences, with ear-splitting shrieks and blood and yellow-green fluids squishing and spewing everywhere. It’s as if a ballpark condiment bar became sentient and turned evil. This is the point at which things finally teeter over into so-bad-it’s-good territory, but by then, it’s too late. And anyway, in the future, no one can hear you scream. 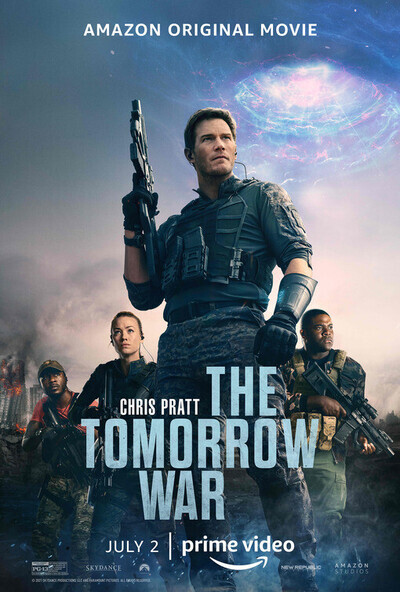