Movies use artistic professions as a sort of psychological shorthand. If a character is an actor, he or she is usually neurotic, potentially self-absorbed and probably an alcoholic. Writer characters are always neurotic, preternaturally self-loathing and definitely alcoholics. Musicians are oversexed dopeheads. They’ve got nothing on cinematic painters, who have it worst of all. Not only are they tortured by whatever inner demon speaks through their brushstrokes, they are tormented by the fact that the general public fails to grasp the meanings of their artwork. Their agony stretches from opening to closing credits, and we are supposed to feel blame and sorrow because people just don’t get the artist’s "genius with a capital G." Not once have I ever been affected by this, because it’s a bunch of you-know-what with a capital B and S.

With that said, "The Time Being" presents us with two painters, one young and one old. The elder man, Warner Dax (Frank Langella) has had some success, but is now a hollow shell of a man. Daniel (Wes Bentley), the younger man, has had no success yet is equally hollow. Their paths cross in what starts as a sinister mystery but ends in a melodramatic slog through standard-issue secrets and lies. "The Time Being" also presents a "spoiler" that you can easily figure out from the trailer, but of which I am not allowed to speak. This makes me a sad panda, because my biggest problem with "The Time Being" is this spoiler, and how useless the film becomes because of it. Rather than blame you for my agony, I’ll just do the writer thing and pour myself another Scotch.

Here's what I can tell you: Before Daniel’s involvement with Dax, he attempts to peddle his artwork at a local gallery. When approached by a potential buyer with questions, Daniel abruptly brushes him off. We are supposed to be on Daniel’s side—that buyer obviously doesn’t get his black and  white paintings of rotting fruit—but I didn’t find the guy’s question illogical. Daniel could certainly have pulled some snooty, high-art comment out of his ass (or provided the correct explanation) in order to get his painting sold. But no, he has to be difficult because he’s an "ar-TEEST." Ruth Brown once sang that if she couldn't sell it, she was going to sit on it. With Daniel’s attitude, he winds up sitting on all his paintings except one.

An agent for Warner Dax buys that painting, but the purchaser has ulterior motives. Dax is dying, and since he can no longer leave the house, he hires Daniel for a series of increasingly creepy video camera surveillance jobs. Dax is extremely precise about when and where Daniel should record the footage, and will pay $1,000 for each job. Daniel needs the money to support his wife and young son, so he takes the job. He hopes the extra money will keep his willing wife from taking a job to keep the family financially afloat.

Daniel is first asked to shoot a sunrise, then to shoot a museum tour, a sunset, and a playground full of children. That last one is a major red flag-raiser, and to the film's credit, Daniel objects. "I ask you to record a bunch of children playing on a jungle gym, and suddenly I'm some kind of pervert?" screams Dax. Well, yeah dude. Daniel shoots the footage anyway.

Daniel's suspicions continue to rise when he encounters the same woman at multiple Dax-requested video locations. The suspicions reach fever pitch when Daniel finds that Dax has an entire file on him, including his credit report and pictures of his wife and kid. The score ominously portends doom under each of these events. Daniel does some investigating and finds out that spoiler I can't reveal. This should be the climax of the movie, but instead, "The Time Being" suddenly turns into a mentor-student melodrama. The mystery elements are basically forgotten in favor of Daniel's spiritual rebirth, or something like that.

"Artists don't have families," says Warner icily. I erroneously thought this was the theme of "The Time Being," but it is just another element to pad the film's running time. Both Warner and Daniel are in varying degrees of estrangement from their families; Warner has severed all ties and Daniel's dreary, sexist attitude causes his wife and kid to move out. This estrangement seems to get the artistic juices flowing for both men. Daniel looks at Warner's paintings and is inspired to add sellable features like color and naked ass to his canvas. Warner uses Daniel's shot footage to paint what's supposed to be the emotional masterpiece of "The Time Being." Instead, when Warner's big secret sees the painting, the screen fills with crocodile tears and stilted emotion.

Director Nenad Cicin-Sain and co-writer Richard N. Gladstein are both guilty of serving up a totally empty, tonally confused meditation on the creative process. Cicin-Sain aims for importance with a capital I by filling the screen with close-ups of Wes Bentley's irises and paintbrushes swirling in water. The gorgeous, tactile quality of the images, shot by Mihai Malaimare Jr., override their pretention, but putting a  video camera in Bentley’s hands while he stares longingly at mundane objects evokes enormous swatches of Sam Mendes's "American Beauty."

The actors try their best. As Daniel's frustrated wife, Ahna O’Reilly has an excellent scene of anger. As Daniel's kid, Marco, Aiden Lovekamp sweetly portrays his longing for fatherly attention in his few scenes. Langella's character is practically useless, but he’s game for scenes both quiet and operatic. Bentley plays the blank canvas upon which we are to paint our response. He stayed without a brushstroke of color for  me.

I'm awarding an extra half a star for Jan A.P. Kaczmarek's overactive score, which evokes all manner of dread and conflict while absolutely nothing happens onscreen. It feels so out of place that it's actually quite subversive. Imagine the most overdone, Philip Glass-style horror movie music playing over glossy footage of a university art class, and you have some idea what your eyes and ears are in for while attending "The Time Being." 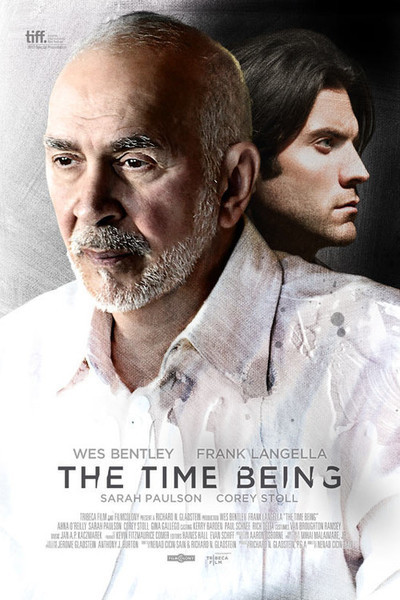